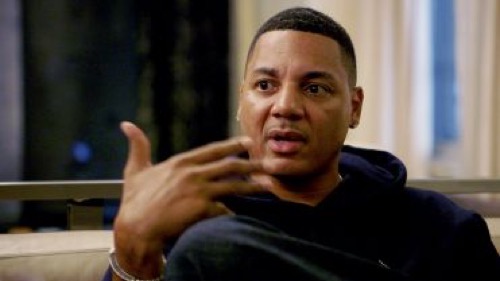 Tonight on VH1 their series Love & Hip Hop continues with an all new Monday February 16, season 5 episode 9 called “Call Your Bluff” and we have your weekly recap below. On tonight’s episode, Rich Dollar works with his artists.

On the last episode, extended-family problems plagued Yandy and Mendeecees. Meanwhile, Cisco focused on his relationship with his children’s mother; Peter brought the family together; and Erica opened up about a new love. Did you watch the last episode? If you missed it, we have a full and detailed recap right here for you.

On tonight’s episode as per the VH1 synopsis, “Rich works with his artists. Meanwhile, Diamond discovers Cisco’s hidden conversations with Tasha; Amina exposes a secret from Peter’s past; and Yandy accuses Mendeecees’ assistant of stalking her.”

Rich reprimands Blaze for starting a fight,and goes out into the hallway to talk to Paris, who brings up the fact that he hasn’t been giving her material. He takes responsibility and apologizes. Paris asks her if he and Blaze are messing around because of her strong reaction to the two of them talking. Rich then goes back to Blaze and tells her that this is what he did not want when he was hesitant to work with her.

Chrissy brings up the fact that she hasn’t met Chink’s father, and he is faced with the challenge of telling her that members of his family don’t want to meet her. He has to tell her that they consider his wife their family, and she says that if that’s how they want to be, they can kiss her ass.

Tara wants to let go of her bitterness toward Amina. She says in confessional that the kids meeting was a good start, but it will take some time. Tara tells Yandy that she wants to talk to Amina and get the answers she wants.

Yandy tells Tara about the fact that Remy booked Mendeeces for a party via Instagram. She says Mendeecees better not cause her to side eye Remy anymore, because that side eye could turn to a side punch in the gut.

It’s Cisco’s late brother’s birthday today, so he’s meeting with his mom and bringing flowers to his grave, which they do yearly.

He tells her that a lot of his bullshit has started to catch up with him. He tells her that Tarsha didn’t know about Diamond. She asks him how much pain he is going to put this woman through. She says his problem is he holds his feelings in too long, and needs to let them out. He tells her to talk to Tasha on his behalf because she has a better relationship with her than he does. He tells her that he feels alone. She says she will talk to her and see if she could come for the holidays. She then tells him to “find Cisco,” and to lay off the women. She says she doesn’t want to see or hear about them.

Paris and Cyn hang out, and Paris tells her about how she tracked Richdown in the studio where he was with Jhonnie Blaze, who ended up swinging at her by the end of the fight.
When she asks if she will continue working with Rich, she says she honestly doesn’t know but he says he has a surprise for her.

Mendeecees is focusing on his management company now that the custody issues are over. Yandy comes in when he and Remy, his assistant, are talking. Yandy thinks he is crazy involving Remy in his business, saying in confessional that she was acting mad thirsty on Instagram. When she comes in, she comments on Remy’s outfit. She pulls Mendeecees aside and says you don’t come to assist someone in a two piece club outfit, and he says she is going crazy. Yandy asks why Remy posted three pics with him in the club in his VIP section. She says this will be her last time working with him, asking him if he will fire her or if she has to. However, Mendeecees doesn’t want to fire her when she is doing a good job, so Yandy decides to talk to Remy instead.

Erica says she and Bow Wow finally had sex and it was amazing. She says he is a real man and finally someone who can handle her.

She says in confessional that this is more valuable than anything she ever had and that she now has a man who loves her. She says her love and personal life are popping.

Amina tells Erica about how Tara keeps reaching out to her. She says that Tara thinks she is the sole factor that broke up her family with Peter, and she wants to tell her that his infidelity began before she came in the picture.

Rich and Jhonni Blaze meet up. He tells her that she needs to stop going crazy because no one will want to work with her. She says she wasn’t aware he was working with Paris, and he says neither she nor Paris is entitled to know who he’s working with.

He says that regardless of the situation, she needs to stop flipping out. She says she felt like they were disrespected and that she shouldn’t have put her hands on her.

Amina and Tara meet at a restaurant. Amina says in confessional she is not going to take responsibility for Tara and Peter’s failed relationship. She tells Tara she really believed the two of them were broken up because of the way he was acting, always with another women. When they got to know eachother better, Peter let her know more about his lifestyle. She tells her about a time when he took a random woman to a motel room, and that she knows several women he has slept with. She tells Tara that if she were her, she wouldn’t want to know everything.

Diamond can’t stop thinking about Cisco despite her new beau, so they meet up. He isn’t very talkative. She says she wants to apologize for spazzing out on him the last time they talked, and that she shouldn’t have put her hands on him. However, she says in her defense that he said a lot of things that riled her up. He says she was going out of her way to be hurtful, which she acknowledges, saying she’s sick of being in a relationship with someone who doesn’t care about her. He says he never woke up one day and said to himself that he wanted to hurt her. She says she just wants him to acknowledge that she was sleeping with Tara the whole time. She tells him that one night he was drunk and she discovered messages between him and Tara, and starts reading copies she has saved to her phone.

Yandy calls a meeting with Remy, who shows up in an outfit Yandy had worn on Instagram. Yandy brings this up and she says that she thought maybe if she dressed more like her she would consider her clothing appropriate. Yandy says she is not the type to judge her based on what she wears, but she clearly has no sense regarding what to wear in a professional setting.

Remy says she doesn’t like that Yandy acts like she’s a girl off the street when she is educated and has a degree. She takes a shot at Yandy’s age, and Yandy says she doesn’t want someone who dresses like her or someone who wears a miniskirt and a crop top to work. She says she is very involved with who Mendeecees hires and fires, and Remy says she will have a conversation with Mendeecees. Yandy says she should and that he will say the same thing. Before storming out, she tells her she isn’t going to go back and forth with an intern.

Peter gets a text from Tara and goes to the house.

Tara tells him that Amina told her about at least six girls that he had slept with while they were together. He says he is mad at her for reaching out to her, and she says the bottom line is did he sleep with those women. He denies it.  He says why doesn’t she

She asks why she has to look at the father of her kids as disgusting and grimy and he says that he is. She says it is hurtful to know he hasn’t cares about her, his children or anyone he claims to care about. He says they should keep it away from the boys.

Rich is treating Paris to a makeover to make up for the fact that Jhonni physically assaulted her. He tells her that Jhonni is remorseful and wants to apologize right now. Jhonni walks in almost immediately afterward.

Jhonni says she is sorry and that she is just protective with a hot temper. Paris asks what warranted her putting her hands on her, and Jhonni says it is her temper. Paris says that’s childish and they’re supposed to be adults, which Jhonni agrees with, saying she would like Paris to accept her apology. Paris begins to say that she accepts it before pouncing on the other woman. They have to be pulled apart.