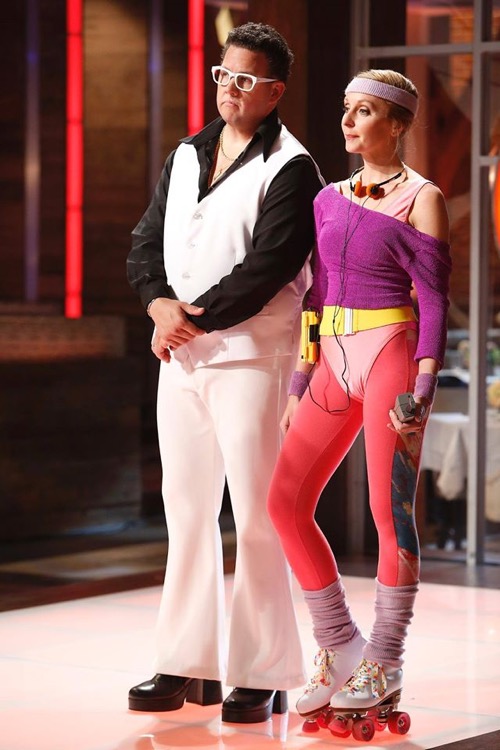 Tonight on FOX Gordon Ramsay’s Masterchef Junior continues with an all new Friday December 11, season 4 episode 6 called “When Life Gives You Lemons,” and we have your weekly recap below. On tonight’s episode, the cooks leave the kitchen for a team challenge to make food for a birthday party for kids ages 8-13, and the invitees include the Chef Ramsay and Elliot children. The winners are safe from elimination, while the losing group compete in a pressure test involving the French dessert croquembouche.

On the last episode, the remaining junior home cooks partied their way into the next team challenge when they left the MASTERCHEF JUNIOR kitchen for the first time to cook at a birthday party for kids ages 8-13, as well as special guests, the Ramsay and Elliot children. The team that received the most votes from the birthday party attendees were  safe from elimination, while the losing team competed in the next pressure test and created the French dessert croquembouche. Did you watch the last episode? If you missed it we have you covered with a full and detailed recap right here for you.

On tonight’s episode as per the Fox synopsis, “the remaining junior home cooks squeeze in a seven-minute team challenge, in which they must make a batch of raspberry mint lemonade for judge Christina Tosi to blind taste test. Tosi will decide which team has the best lemonade and is safe from elimination, while the losing team will compete in the next challenge, during which they must create a rad dish from a decade in which one of the judges was born.”

Don’t forget to join us for our live recap tonight at 8:00pm when Masterchef Junior season 4 episode 6 airs on Fox. While you wait for the recap, let us know how you are enjoying this season of MasterChef Junior.

Separating into two teams of seven, some of the youngest and best home cooks in America were asked to make a one of a kind lemonade. Which is actually a lot harder than it sounds. Because not only did they have to make a lemonade that was both unique and delicious but there were consequences if they failed.

So no one wanted to get wet and therefore they each wanted to be put on the best team. The one that was bound to win. However a few of them ended up regretting the power of the long straw draw.

Most of the older and thereby taller kids went on to draw the long straws meanwhile the younger ones drew the much shorter straws. And so that’s how teams Red and Blue were created. But Addison had been one of the kids to wish she’d get the long straw and then came to regret her choice when that’s where she landed.

Apparently there weren’t any team captains involved and so without any proper leadership the Blue team (Long straws) quickly fell apart. It seems the older kids each tried to yell over each other and thus their lemonade wasn’t up to scratch when it came time for Christina to conduct a blind taste test. Yet the Red team (Short straws) did manage to introduce flavor to their lemonade as well as taste. So the Red team won the challenge but that didn’t really matter to the judge.

See the judges weren’t exactly honest with the kids when they said the losers were the only ones to get dunked with lemonade. So it was both the Red and Blue teams that needed a towel after the first challenge was over.

Though the Red team were in fact saved from having to cook later. So that at least was something. They didn’t have to suffer like the Blue team had to.

And as for the Blue team, after they had been threatened with making the best of the sixties and seventies dishes (thanks to Ramsay being born in the sixties and Graham in the seventies) they were then told that they would be making a classic eighties dish. The Surf and Turf. Which is a lobster and steak dish.

Yet for one person there it might as well have been the challenge of a lifetime. Mia as it turns out does not cook or eat either steak or lobster. So technically she was flying blind on this particular competition and it showed in her food.

The steak as well as the lobster were undercooked and Ramsay actually refused to eat them as a safety precaution. Therefore the only chance that Mia had at staying in the competition was if two other people had done much worse than she did. And unfortunately for that just wasn’t the case.

Addison like always impressed the judges by moving away from the traditional Filet Mignon and instead served them a Steak Diane. And while Kaitlyn did cook a Filet Mignon, she definitely modernized her dish even in t the way she styled the plate. But I’m guessing Zac managed to earn the judges’ respect when he still pulled a pretty good Surf and Turf despite burning his hand on a pan.

So those three were for sure safe. However Mia, Tae-Ho, and Corey were the clear bottom three and that meant Amaya was riding in the middle.

Corey had overcooked his NY Strip steak and had over-salted his lobster. And as for Tae-Ho, he had undercooked his Filet Mignon and had put a store bought Sriracha sauce on his lobster thereby destroying it in the eyes of the judges. So when it came down to it – the judges had to pick someone they either believed or just hoped would improve. And that’s how they must have chosen to keep Corey.

Both Mia and Tae-Ho went home tonight. And while it’s sad that they had come so close to the top ten without making it – there is always next year.