Natalie Wood’s Body To Be Exhumed After 33 Years: Will Robert Wagner Be Arrested For Her Murder? 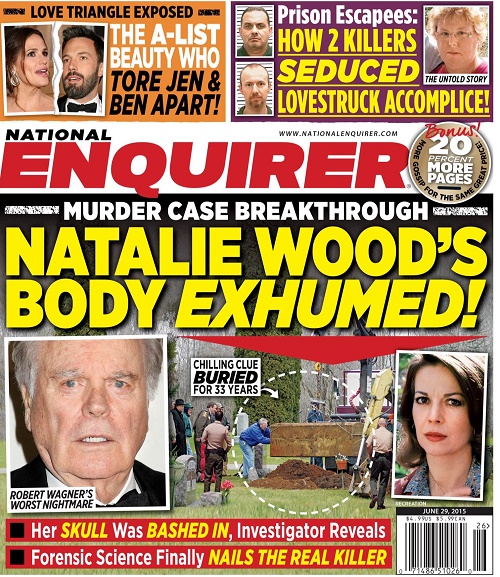 The mysterious death of Natalie Wood continues to haunt fans of the actress nearly 33 years later. Did Robert Wagner get away with murder? Conspiracy theories have flown around for years that Natalie’s mysterious drowning was all a cover-up and her husband actually murdered her that fateful night aboard their boat, Splendour. Despite a lengthy list of evidence that indicates foul play was committed the night Natalie allegedly drown, no charges have ever been formally filed against Wagner. According to a new report from the National Enquirer, that could all change.

The June 29 cover of National Enquirer’s headline screams: “Natalie Wood’s Body Exhumed: Murder Case Breakthrough.” According to the tabloid, the chief investigator of the cold case has unearthed new evidence and is calling for the police to exhume Natalie’s body after all of these years – it’s Robert Wagner’s worst nightmare coming true!

Investigative journalist Marti Rulli dished to National Enquirer, “I believe that Natalie suffered a skull injury that rendered her unconscious. But, in a shocking breach of medical protocol, Natalie’s brain and skull were never examined in the original autopsy that determined she accidentally drowned. If her body is exhumed, whether or not she suffered a skull injury could be determined.”

The fact that Natalie’s head was never examined after her death is just the tip of the iceberg. When Natalie’s body was recovered it was noted by the coroner that Natalie had bruises and lacerations on her body that were received prior to drowning. And the captain of Splendour reported the night that Natalie went overboard that he had witnessed Robert Wagner assaulting her prior to the incident.

Have you followed Natalie Wood’s case over the years? Do you think Robert Wagner is responsible for her death? If the body is exhumed, will he be arrested? Let us know what you think in the comments below!