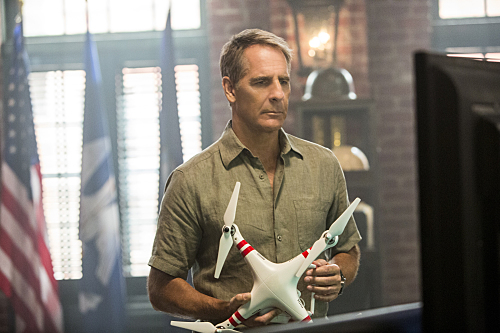 Tonight on CBS NCIS: New Orleans returns with an all new Tuesday October 13, season 2 episode 4 called, “I Do,” and we have your weekly recap below. On tonight’s episode, the team investigates the murder of a Navy drone pilot who acquired military surveillance footage using a black market drone.

On the last episode the team had to determine if human error or technical malfunction led to the death of a combat pilot who crashed in a high-tech jet that had just been approved to be deployed to military bases on a global scale. Did you watch the last episode? If you missed it, we have a full and detailed recap right here for you.

On tonight’s episode as per the CBS synopsis, “the NCIS team must determine why a murdered Navy drone pilot was using a black market drone to obtain military surveillance, and whether the drone’s footage is linked to his death.”

Tonight’s episode looks like it is going to be great and you won’t want to miss it, so be sure to tune in for our live coverage of CBS’s NCIS: New Orleans at 9:00 PM EST! While you wait for our recap hit the comments and let us know how excited you are about this season 2 episode 4.

Navy Lieutenant Max Griggs was a drone pilot. Though he had his reasons for choosing that specialty. Griggs, you must understand, took the job as a way to spend more time with his family seeing as normally he would have had to spend several months overseas. So he’s a man that wanted to come home and see more of his son growing up.

But, apparently, never everyone could appreciate what he did for his country because his body was found after a guest stumbled from her wedding party in order to retrieve the bridal bouquet. And the only piece of evidence they have that someone hated him was the fact his car had been spray-painted “Killer” a couple of days before his death.

Now the tag doesn’t necessarily have anything to do with Griggs’s death but Pride and his agents had to investigate it all the same. Drone pilots are supposed to be anonymous. As in no one should have even known what Griggs did for a living and his wife certainly hadn’t advertised it. She understood the risk if a jihadist were to ever get a hold of his name.

So Pride and LaSalle went down to the New Orleans headquarters and they asked Griggs’s commanding officer if there had been any leaks lately. And all the man could say in return was that when they left – they should take the public access road. Subsequently there was a mob waiting on the road with signs they created protesting the drone program.

Thus, it wasn’t a mystery about who would want to tag Griggs’s car with that stupid paint. Though having Sebastien back at the office working on finding out where the paint came from turned out to do a lot more good than taking few snaps of a bunch of angry people. After all Sebastien’s efforts actually led to a name.

And Mitchell didn’t deny tagging the car. But he swore he hadn’t killed Griggs. He said he followed him and that they did get into altercation but that was it. Besides spotting Griggs’s secret room, nothing else happened and he had an alibi.

As for the secret room that Mitchell had mentioned, that yielded results and brought up possible concerns.

Their victim was doing aerial surveillance on most of the military bases in New Orleans and he would have no reason to do that unless he was spying on his own government. So Pride dreaded the way the case was going. Yet knew he had to keep investigating what Griggs was looking into if he ever wanted to find the man’s killer.

They found the drone that Griggs was using and they narrow down his search. Griggs had become obsessed with the fields that surrounded the military bases so that’s where the agents decided to check. And what they eventually found was the body of Louisa Banks.

Louisa had disappeared a while back after she had gone for her run. So it doesn’t look like Griggs was into espionage. All clues point that he was looking for Louisa thought no one knew why.

Louisa and Griggs hadn’t interact or at least there wasn’t evidence that they knew each other. Meaning Griggs either knew who hurt her or was secretly a killer. And seeing as he was found at a wedding reception without an invite, the team were going with theory that he had suspect for Louisa’s murder.

And that’s how they came to question the newly wedded groom. Chief Petty Officer Hewitt was taking his wife on a honeymoon using the same car that was used to run Louisa over. Yet he told Pride and his people that he didn’t kill anyone. His car was on base and he let his unit borrow it whenever they needed it.

So when Hewitt had an alibi, Brody decided to ask the bride. The bride had done extensive search on all of her wedding guests so Brody figured she must know something. But she didn’t and even if she did – she would never have disclosed. She told Brody that her husband barely back from Afghanistan after his unit had been surrounded and that made Brody think. Did the unit survive because of drone support?

In fact they did. Griggs had been the one to save them and while he was overseeing their safe rescue, Petty Officer Boone had told another officer that if he died he would go to hell. Then he mentioned he was involved in a hit and run and that he buried the poor woman out in the field. So that’s how Griggs came to know of Louisa.

Though the friend that Boone had confessed everything to was surprisingly the only man from his unit not to survive the attack.

So ultimately NCIS had Boone for three murders. He killed a woman by accident but then went on to kill others just to cover it up. And Pride told the other man that he was without honor. Which is something the Navy is probably going to agree with.

And LaSalle decided to return Griggs’s drone to Griggs’s son. He promised the young boy that he would and later he was with Ryan when they took the drone out for another flight.