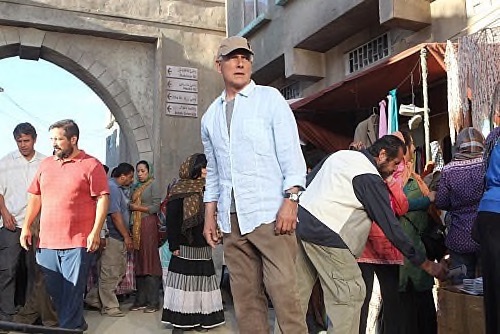 Tonight on CBS NCIS returns with an all new Tuesday May 12, season 12 finale called, “Neverland” and we have your weekly recap below. On tonight’s episode, season 12 ends with NCIS feverishly investigating a global terrorist group that is recruiting teens via the Internet, following a deadly bombing overseas that resulted in an emotional and surprising loss for the team.

On the last episode, the NCIS cyber case turned into a united global effort after evidence confirmed “The Calling,” an international terrorist group that recruited children through the internet, had been purchasing S-bombs off the black market. Did you watch the last episode? If you missed it, we have a full and detailed recap right here for you.

On tonight’s episode as per the CBS synopsis, “NCIS feverishly investigates a global terrorist group that is recruiting teens via the Internet following a deadly bombing overseas that results in an emotional and surprising loss for the team.”

Tonight’s episode looks like it is going to be great and you won’t want to miss it, so be sure to tune in for our live coverage of CBS’s NCIS at 10:00 PM EST! While you wait for our recap hit the comments and let us know how excited you are for the season 12 finale.

Special Agent Ned Dorneget never wanted his friends and coworkers to know about his governmental pedigree. In fact for the most part, he often pretended to be just one of the guys. An average Joe that eventually found his calling. Yet the truth is that the job was always in his blood. His mother is CIA officer Joanna Teague. She’s a high-level Middle Eastern operative and now that same woman wants to work her son’s case with the NCIS unit.

Or in other words break one of Gibbs’s rules.

Gibbs doesn’t like it when people make the case personal. And nothing could be more personal than Joanna working to find her son’s killer. However, in the end, she managed to convince Gibbs to let her stay on.

She claimed she could be of use and, just in case, she also played on Gibbs heartstrings. Joanna did this by bringing up Gibbs’s own child. And the guilt he still feels from that is what made him agree to potential disastrous idea.

So this case doesn’t have Gibbs in his right frame of mind. He’s feel guilty about an agent dying on his watch and that has him seeing ghosts from the past who silently judge him.

Meanwhile Joanna is using her situation with others as well. Like Luke Harris for instance. So far Luke is the only person the team has to help. They may also have known terrorist Matthew Rousseau in their custody but unlike Luke he’s too seasoned to change sides.

Last week, Luke’s “friends” killed his parents when they hadn’t heard back from him. Thus Luke should be more open to talking. Yet he’s still keeping secrets and Gibbs was all for letting him get away with it.

Earlier McGee found out that “the Calling” was sending all their initiatives songs. Industrial Techno songs in particular. And despite his parents’ death, Luke hasn’t let his mp3 player out of his sight. So naturally Gibbs was expected to confiscate that player but he seemed reluctant to do so.

And then it was too late.

Another teenager found Gibbs’s home and he attacked the social worker. So Luke had been collected and Gibbs never got the chance to hear what was on the boys’ mp3 player. And as it turns out it was actually very important that Abby checked the boys’ songs. “The Calling” had embedded individual Morse code into every song they handed out.

See, Daniel Budd was a DJ. A very popular DJ that is until his star faded and now he’s the leader of “The Calling”. Daniel was always a political activist but once he began getting kids to commit petty robbery for him – he wanted to move on to something bigger. As if there was a message in the chaos.

And it was Daniel’s people that snatched Luke from right under protective care. Now did they do that because Luke was loose end or was Luke still receiving orders? The answer was up in the air.

Gibbs though wanted to remain hopeful on that topic and he also wanted to find Luke before the young man could be hurt. So going behind his back, Joanna used her CIS intel to find Sadiq Samar. Samar was the kids’ handler and the NCIS were trying to find him but ended up letting his people know that they were looking.

So Samar had gone deep underground when Joanna found him. And Joanna then proceeded to beat the life out of him until she got answers. Meaning she got the job yet it wasn’t how Gibbs or his team would have went about it.

And so Gibbs was upset with her and reminded her that she was an honored guest working on their case.

Plus Samar only gave them information that Daniel wanted them to know in the first place. Consequently, the team followed Luke’s trail all the way to Iraq. And once there they operated on rescuing the young boy.

But Luke didn’t want to be rescued. He wanted to belong and unfortunately he felt like he belonged with “the Calling”. So Daniel gave him a task to prove himself and Luke carried it out without ever hesitating.

Daniel told Luke to shoot Gibbs and, after three shots, the legendary NCIS agent was felled to his knees.

Is Gibbs alive or is this the end for him? I guess we won’t know until next season of NCIS…