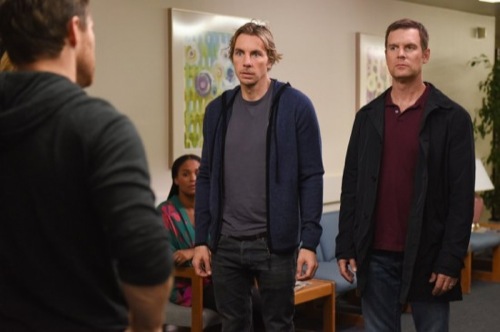 Tonight on NBC Parenthood starring our favorite family the the Bravermans returns with an all new Thursday January 8, season 6 episode 10 called, “How Did We Get Here?” and we have your weekly recap below. On tonight’s winter premiere episode, Zeek’s [Craig T. Nelson] taken to the hospital and his family gather near him, anxiously awaiting news. However, Adam [Peter Krause] and Crosby [Dax Shepard] must leave to tend to a crisis at their restaurant; and Joel [Sam Jaeger] lets Julia lean on him, complicating their confusing relationship even more.

On the last episode, an open house was held at Chambers’ Academy, but it was marred by tension between Dylan and Max. Meanwhile, Hank was pleased that Ruby was looking forward to her school play, but Mark Cyr’s presence caused problems; and Zeek enlisted Drew on a covert mission.

On tonight’s episode as per the NBC synopsis, “Zeek (Craig T. Nelson) is rushed to the hospital and the entire family hurries to his side. As Adam (Peter Krause) and Crosby (Dax Shepard) nervously await news of Zeek’s health, a serious emergency at The Luncheonette pulls them away. At the hospital, Joel (Sam Jaeger) sticks by Julia (Erika Christensen), offering unwavering support, and further blurring the lines of their relationship. Also starring: Monica Potter, Lauren Graham, Miles Heizer, Joy Bryant, Bonnie Bedelia and special guest star Ray Romano.”

Zeek was rushed to the hospital on tonight’s episode of “Parenthood” but to be honest his initial prognosis is not looking good. When he came in, he was unconscious and the infrequent progress reports aren’t revealing that much. Yet, everyone continues to hope all will be well.

The children and the grandchildren (that were old enough) all immediately rushed to the hospital once they got word. They wanted to see him though truthfully everyone knows they won’t be able to do much. It’s not like any of them are surgeons. So, really, they just came by to offer each other support and yell at the hospital staff if necessary.

But, in spite of her family supportively surrounding, Camille has been holding back on them. She saw firsthand how bad Zeek was and only admitted to Adam that she didn’t think her husband was going to make it through.

However Zeek did survive surgery and for now he’s hanging in there. The doctor had told Camille they had him stabilized.

So, after they got what they looks like good news, Adam and Cosby had to leave the hospital in order to go deal with was left of their business. Their already struggling business that is. Apparently, it was broken into that very same morning as they wee waiting to hear about their father. And when they arrived on the scene – the guys found their studio was completely ransacked. Everything valuable was stolen and thieves also had a good time wrecking the place before they left. Hence their livelihood might be a bit of bust at this point.

And, not long after the guys had returned to the hospital, their “stable” father had flat-lined.

Zeek’s situation is deteriorating and as it does his family meanwhile is falling apart. Drew now feels guilty about revealing Zeek’s secret when he knew it was supposed to be a surprise for his grandmother. And what with Zeek being ill – Drew also feels like he’s never going to get the chance to make it up to the only father figure that counted.

Hank though ended up comforting Drew. He sat with the young man and simply let him vent. You see while Hank tends to feel like he can’t do much – his silence as it turns out helped a kid grieving over his grandfather.

Still, don’t write Zeek off just yet. The doctors had quickly stabilized again after he had suffered another heart attack. And this time he was able to get off the breathing tube. So soon he was speaking to his family and cracking jokes like his old self.

He’s not in the all-clear just yet though but he does look like he’s improving. The doctors though are the ones that burst the bubble. They told Zeek that he was going to need surgery and they didn’t try shy away from what could happen. Zeek’s heart is weak as it is. Adding surgery into the mix is basically risking his life.

But there are other things going on besides Zeek’s health scare. Adam and Cosby heard back from their insurance company and it seems they’ve received enough money to cash out the business. Which is something Adam wants.

Cosby however is on the fence. His wife has reminded him how much he hates working for other people yet he doesn’t know if he wants to hold onto business if he’s going to have to go it alone.

Then there’s Hank who got so turned around by what’s going on – he proposed to Sarah. And she told him she would have to think about it. She didn’t want to just say yes.

And there was Amber. Her baby shower had to be cancelled because she didn’t want to pull anyone from her grandfather’s bedside. But her family instead threw a surprise baby shower in the hospital cafeteria.