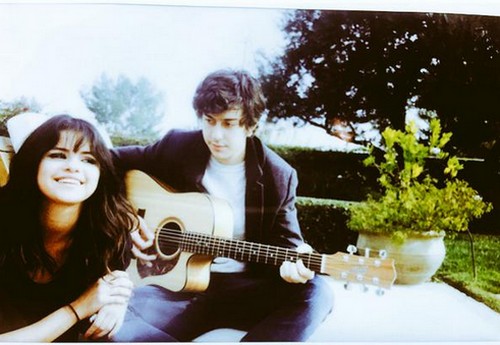 Will Selena Gomez cheat on Zedd with Nat Wolff? Selena Gomez and Zedd are back together, for now, despite the fact that she was talking to Justin Bieber behind his back. But, there is a new man in Selena’s life that Zedd is worried about, and it’s not Bebs! News broke this month that Selena was reuniting with her 2014 co-star Nat Wolff in the new James Franco film that she has been working on, and then Selena posted a photo of herself and Natt (eerily similar to those that she used to post of herself and Zedd), and said they are collaborating together on a song!

Selena Gomez met Nat Wolff in 2014 when she played his love interest in the straight to Netflix comedy “Behaving Badly,” since then she and the actor/folk singer have remained close and in contact. According to Hollywood insiders, Selena has always had a crush on Nat, but when their movie wrapped they both began working on separate projects and went in opposite directions – but now that they are back in each other’s orbits her current boyfriend Zedd is shaking in his boots.

Zedd and Selena Gomez grew close and began dating when they were working on their hit song “I Want You To Know.” So, it’s obvious that Selena has a thing for musicians – and falls hard and fast when she is working long hours on new music with them. Zedd should definitely be concerned at this point. Our inside source dished, “Zedd knows that Selena isn’t that in to him, so whenever another guy comes around he gets extremely insecure and jealous. When Zedd heard through the grapevine that Selena and Nat had a thing for each other, he began panicking. And, now they are working on a song and a movie at the same time – it’s like his worst nightmare is coming true.”

What do you think of Selena and Nat Wolff? Do you think Selena Gomez would ever cheat on Zedd with him? Is Zedd just being insecure, or do you think he should be worried about them working on a movie and a song together? Let us know what you think in the comments below!