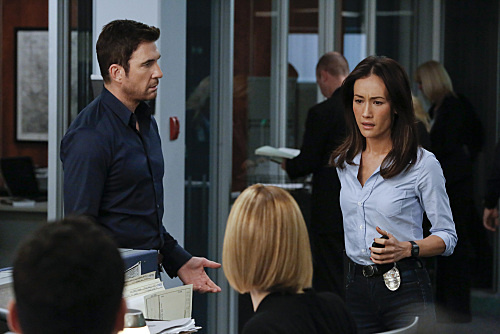 Tonight on CBS Stalker starring Dylan McDermott continues with an all new Wednesday February 18, season 1 episode 17 winter finale called, “Fun and Games,” and we have your weekly recap below! On tonight’s episode, Beth’s [Maggie Q] former stalker inches closer to her as he goes on a deadly rampage and targets her inner circle.

On the last episode, when a young woman was harassed by a mob of people, Beth and Jack realized they were dealing with a rare case of group stalking. Also, Ray escalated his plan to isolate Beth from her closest allies. Did you watch the last episode? If you missed it, we have a full and detailed recap right here for you

On tonight’s episode as per the CBS synopsis, “Beth’s former stalker goes on a terrifying and deadly rampage targeting her inner circle as he methodically moves in on her. This episode was written by series creator and executive producer Kevin Williamson.”

This is definitely one series that you don’t want to miss. Don’t forget to stay tuned to Celeb Dirty Laundry where we will be live blogging the season 1 finale of Stalker.

Out of the two, Ray is proving to be the more dangerous one when it comes to Beth and her friends. Because on tonight’s new episode of “Stalker”, when Amanda woke up in the hospital with no idea of who attacked her; Beth didn’t even need to think it through before she named Ray as Amanda’s assaulter. Apparently this isn’t the first time Ray has does something like this and that’s why Beth is refusing to underestimating.

Before, back when Ray was her boyfriend, he had tried to manipulate her into staying with him and when that didn’t work he then began romancing her sister. It was an obvious ploy to make her jealous and at the time Bet was smart enough not to fall for it. So, instead of stopping, that only made Ray become worse.

So much so that he eventually upped his game until it resulted in dire consequences.

Once the sister game didn’t work, Ray had set her home on fire in the belief he could stop it in time and save her family before they got hurt. That way he could have come out of the situation looking like a hero. Yet his plan backfired when Beth ended up losing her family in the fire. And he was sent to a psychiatric facility.

But now that Perry had gotten him out of there, Ray is reverting back to his past behavior. And not much has changed in regards to what he wants. He wants Beth and he’s prepared to let people die in order to get her.

First he attacked Amanda and then when the police started to write off the incident as a possible robbery – he then turned to Tracy next. Someone at Tracy’s job had let down their guard and they ended up revealing her whereabouts. So Ray tracked Tracy down and kidnapped her all the while she was trying to lay low.

And poor Perry didn’t know anything about his friend’s plan!

Perry was actually still at the motel when he saw on the news that Ray had kidnapped Tracy. And once he saw, he knew that’s not a plan he wants to be any part of. Perry doesn’t want to hurt anyone – he just wants Beth.

So he’s abandoning Ray. At least in this. And he’s even reached out to his father so he that he could receive help from the older man to make sure he doesn’t get entangled in a possible murder charge.

An associate of his family came for him and told Perry that his father wants him to turn himself in. it seems their plan is for Perry to cop to stalking and merely getting in over his head. But Ray found them before Perry could carry out that plan. So when the cops arrived at the motel – they found one dead private investigator and Perry was missing.

Ray had taken Perry on as another hostage but he didn’t seem to want to keep him around. He wanted to play with Perry like he was playing around with the cops.

Ray had called Beth and he had passed along enough clues for her to figure out where he hid Tracy. So he told her to come and find her friend. Yet he must have known she wouldn’t have been allowed to do so.

No one, not with common sense or with these circumstances anyway, would have allowed Beth to play a part in the remainder of the investigation. So she was been benched. And as for the rest of her team, they were being led by Vicki Gregg.

Vicki was both familiar to the case and she’s known as the top dog in their field. Hence, the team was still able to find and locate Tracy even though Beth was stuck taking phone calls instead of being out in the field. However, after they found Tracy, they realized Ray knew their plans about protecting Beth all along.

Because she was under protection, she had a patrol car parked out front and even Ben inside of the house with her, and still Ray got to her!

He took Beth and threw her in the same truck of the car that was also carrying around Perry’s dead body. So on top of traumatizing the woman he supposedly loves – there’s no telling what a man like him will do next!