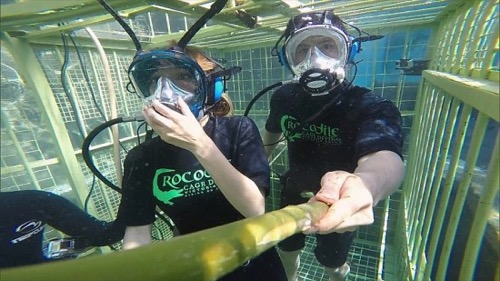 Tonight on CBS the Emmy award winning show The Amazing Race hosted by Phil Keoghan returns in an all new Friday October 23, season 27 episode 5 called Get in “King of the Jungle,” and we have your weekly recap below. On tonight’s episode, the race continues in Victoria Falls, Zimbabwe.

On the last episode as racers soared high above the breathtaking Victoria Falls toward a double U-turn, Team Texas used their express pass in the hopes of eliminating The Green Team. Did you watch the last episode? If you missed it, we have a full and detailed recap right here for you.

On tonight’s episode as per the CBS synopsis, “teams conquer their fears in Zambia, Africa when they plunge more than 250 feet over the Zambezi River, feed a trio of crocodiles and walk with lions through the jungle.”

#AmazingRace begins with the Texas boys giving the express pass to the Alabama team. Justin and Diana leave first with Josh and Tanner close behind. Both top teams talk about how they are each others greatest threats and the Texas guys plan to u-turn them if they get a chance. The other teams show up to the u-turn and then Denise and James find out that they got the express pass and head off. They have to use the pass this turn.

The teams head to the Lookout Café at Batoka Gorge. Justin and Diana get the #Roadblock at the Zambezi River from season 1. They have to do a height challenge that’s a zip line over the gorge. The zip line starts with a free fall jump of 200 feet. Josh is doing it for the Texans. Justin gets pulled back up and takes off his equipment. Justin and Diana now get a #Detour of Crocs or Canoes. One has them in a crocodile cage underwater. The other is a canoe ride and then one has to hoist the other.

Josh is hooked up and Tanner says there is no way he could step off the platform. Josh screams like a toddler girl. Justin and Diana decided to paddle then the Texas guys also decide to paddle. Cindy and Rick check in at 5th place and head off. The paparazzi, Logan and Chris give a measly $20 and keep $150 more until Phil leans on them and says the other teams donated all their cash. With that guilt, they finally pony up the rest of their cash. Jerks…

Chris and Logan are in 6th with Jazmine and Danielle in 7th and cheerleaders Krista and Tiffany are in 8th. They decide to u-turn the green team even though they already came and went because they are clueless. Phil hands them their clue and says they have some serious catching up to do. Kelsey does the Gorge and then James Earl. At the #detour, Justin and Diana get to the canoes and are amazed to see an elephant right there. They put it in the water and see crocodiles nearby.

Tanner and Josh show up next and see Justin and Diana right ahead of them. Tanner and Josh are stronger but they don’t know technique. Justin used to instruct boating and Diana was a rower in college. Cindy and Rick then Chris and Logan make it to the roadblock clue box then head for the gorge. Two of the teams stupidly gets back in their car thinking they have to drive to the gorge when all they had to do was walk away.

The cheerleaders do the gorge and run off. Kelsey and Joey load into the crocodile cage. Denise and James show up and use the express pass. Kelsey and Joey have to feed the alligators. They are raised back up out of the water and that puts them in 4th place. Cindy does the gorge. Chris calls them morons and then says they shouldn’t have followed them. Cindy and Rick head to do the crocs. Logan is strapped in and scared. He screams horribly on the way down.

At the lion encounter, Justin and Diana are told to walk with the lions and hunt for their next clue. They tell them no loud noises and never run. Denise and James are there right after them in 2nd place thanks to the express pass. The guides tell them to look the big cats in the eye. Josh and Tanner are still complaining about the express pass. Kelsey and Joey are in 3rd and Tanner and Josh show up in 4th. Both of these teams are told they have to wait for the first two teams to come back.

Tiffany and Krista are worried they are going in a cage to feed crocodiles. Cindy and Rick are close behind. Logan and Chris are there too in last place. Chris tells Logan they can’t do this one but she insists they stay. She tells him they can switch or not but tells him to shut up about it. Chris keeps ranting and says they need to go. They keep on arguing and are now fussing at each other half-dressed. They get back into their wet suits and then Logan says it’s because Chris screwed up the swing jump.

James spots a skull and points it out and they head over. The lions get a little aggressive on the Justin and Diana walk. They get their clue first and are told to head to the Masuwe Private Reserve that’s the pit stop. They have to bring two large fruit baskets to the mat. Kelsey and Joey get started on the lion walk then Josh and Tanner next. Denise and James are in 2nd with Justin and Diana in 1st. Cindy and Rick feed the crocs while Chris and Logan are still arguing.

Justin and Diana make it to the pass in 2nd place. He’s upset they were in first place all day only to get second and is happy the express pass is out of play. The track stars head to the lion encounter but say Masuwe Lodge and the driver takes them the wrong way. They pick up the fruit and head to Phil without doing their lion encounter. They realize they are wrong and decide they need to #ReadTheClue. Kelsey and Joey tell them where to go.

The track stars came back without their clue because they weren’t paying attention AGAIN – duh! Now they have to wait until the other two teams come back to do their walk. They didn’t read the whole clue and know they were supposed to look for the skull. Those idiots may have sent themselves home since they have to do the walk again. Chris and Logan walk by the skull but Cindy and Rick spot theirs. Then Logan and Chris finally see theirs. Cindy and Rick ran like morons for the clue and almost set off a lion.

Tiffany and Krista check in for 5th place. Cindy and Rick and Chris and Logan are thrilled to see the track stars are still there and they head off at top speed. Chris and Logan argue again over the fruit. The track stars get their clue and head out. They hope the other teams have fruit issues. Logan tells Chris to calm down and he tells her to stop talking to him. The track stars make it there and load up the fruit on their heads. Now it’s a fruit on the head foot race.

Phil is at the mat and the men are struggling. Logan and Chris check in at 6th place. Joey drops all his fruit and then one of the track stars does too. Cindy and Rick make it in 7th place narrowly beating out the track stars Jazmine and Danielle. Phil tells them they’re eliminated from the race. Wow. Tons of stupid mistakes on tonight’s race. Join us next week for more #AmazingRace.