The Amazing Race Recap – Sloppy Noodles in Nagano: Season 26 Episode 2 “I Got the Smartest Dude” 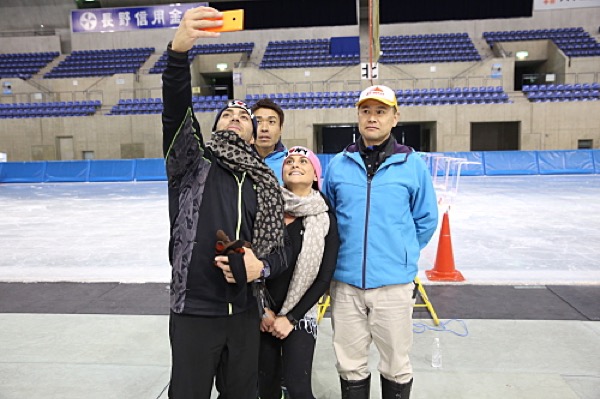 Tonight on CBS the Emmy award winning show The Amazing Race hosted by Phil Keoghan continues with all new Wednesday February 27, season 26 episode 2 called, “I Got the Smartest Dude” and we have your weekly recap below. On tonight’s episode, the race continues in Nagano, Japan.

On the last episode, season 26 began with 11 dating couples, including five pairs who met for the first time at the starting line at California’s Castaic Lake, immediately facing a U-Turn before flying to Tokyo on the first leg of the race. Did you watch the last episode? If you missed it, we have a full and detailed recap right here for you.

On tonight’s episode as per the CBS synopsis, “teams race through Nagano, Japan where Racers take on an Olympic-sized Detour, and one team takes a tumble that may jeopardize their chances in the Race.”

#AmazingRace starts now. #TheLegalTeam is thrilled that they won the first leg of the race. They want to see one of the local coffin hotels. #TeamJJ is wondering if love is in the air on their extended first date. #TeamSoCal goes to a tiny hotel room that has a desk – it’s almost like a cubicle hotel. These remind me of the anime reading room hotels. Next morning, they have to take the bullet train to Nagano Japan, site of the 98 Olympics. Jelani and Jenny are first out and he’s letting her take the lead. They head out on foot to the train station on advice of a cabby.

Jeff and Jackie get in a cab and he says he’s happy that he’s with such a hot chick. Laura and Tyler #TeamSoCal are third to leave and they also hop a cab. Jenny and Jelani buy tickets for the 6:30 am train to Nagano. Only a few of the teams make it onto the first train to Nagano. #TeamNewKid says they were supposed to do a tour in Japan but did Vegas again. Bergen and Kurt talk about how strange it is to date someone who looks just like themselves. They’re bonding at this stage.

#TruckStopLove has been dating for eight months and says they are getting along like PB&J. Haley and Blair say it’s the most extreme blind date ever. Matt and Ashley head out and he says the blind date couples have an advantage because they are on their best behavior with each other while they lost time arguing. Some make it onto the second train and some onto the third, fourth and fifth trains to Nagano. #TeamTuskegee hops a cab and head to the train station in last place.

The first train arrives at Nagano Station and #TeamSoCal, #TeamJJ and #TheLegalTeam are all on it. Phil says the teams have to open a Japanese puzzle box. It takes a series of moves to open it to get a password to get the next clue from a guard. One lucky couple will win a special relaxing date night. First to the #Roadblock is #TeamSoCal followed by Jelani and Jenny. The place is so loud – seems like that would be distracting while trying to figure out the box.

The three guys from the top ranking blind date teams are working on the boxes. #TeamTuskegee missed their train because they were taking photos of themselves – it’s a #SelfieFail. They were just talking smack about people underestimating them. Tyler is first to get their password. He has to try twice to pronounce it and then gets their next clue. He gets to pick from the pile. #TeamTuskegee lost 16 minutes by missing that train.

Jelani is next to get their box open and gets the clue. That puts the legal eagles in second place. The next stop for the teams is Nishi-Guchi Zenko-Ji, a temple. #TeamSoCal is the first to the temple. They are at a #Detour and they choose between ice or noodling. Jelani and Jenny are next. They both pick the noodle challenge. #RxForLove makes it to Nagano. Jeff finally gets the puzzle box open and Jackie cheers. #TeamTuskegee’s train had an emergency stop so they’re even further behind.

Mike is working on their puzzle box as more couples show up to the Roadblock. Phil says the teams doing the noodle challenge have to feed each other a giant bowl full of noodles using only slick chop sticks. They have to sit in front of a fan that tries to cool off the steaming hot noodles. #TeamSoCal is halfway through when Jenny and Jelani get there. #TeamNewKid and #TeamBlondeDate are working on the boxes.

Laura and Tyler head to Patio Daimon for the pit stop – it’s a restaurant complex – after they slurp the last of their noodles. Their cab driver left them and they have to run for a cab and Laura is feeling queasy. Jelani and Jenny’s driver waited and they are able to get out ahead of them. #TeamTuskegee finally makes it to Nagano. The other detour is a chair challenge on ice. They have to push one another around the ice with one in the chair in less than four minutes for two laps.

#TeamSochi is ready to conquer this. Steve pushes Aly and makes it on their lap and he took about 1:45. Then the speed skater starts and Aly has it going on even though they are hockey skates not speed skates plus he’s heavy. He encourages her and they make it with 25 seconds to spare. That puts them in third. Jelani and Jenny are first to the pit stop and they are thrilled. Phil says they won a fitbit wellness kit. They also get a one year gym membership, a year of cooking classes and groceries.

Phil asks if there’s a romantic connection. They say they are friends and are focused on the race. Phil says they’re avoiding the connection. Laura and Tyler make it there in second. Laura says they are also focused on the race. Harley and Jonathon win the date night and they’re excited. They head out for the pit stop. #TeamTuskegee finally gets to the first clue box. Hayley is struggling with her box. Blair is trying not to bug her. She finally gets it.

#TeamTuskegee is working on their box. Aly and Steve make it for third place. Libby gets their box open but they are dead last. Jeff and Jackie are at the ice challenge and she is falling all over. They flop twice in a row. Kurt and Bergen head to the noodle challenge. The truck stop lovers show up and race against them in the ice challenge. Hayley and Blair pick the chair. It’s a photo finish for #TeamJJ on their third try but they make it.

The truck stop lovers are thrown off and they decide to try again. #TeamTuskegee decide to go do the noodle challenge. #TeamNewKid are at the noodle shop. Kurt and Bergen are fussing with each other over the noodle challenge. The new kids finish faster and get their clue. They are currently in 5th as they head out to the pit stop. The waitress points out noodles the Kurt and Bergen miss and they have to try again. They finally get their clue and head out in 6th place. They call her a noodle Nazi.

The truck stop lovers crash again – she smashes her wrist into a wall and has to ask for a medic. He went down hard too. They check out Rochelle’s wrist and Mike encourages her to switch. She thinks it’s a bad idea. Another team shows up – the hairstylists. Mike begs Rochelle to switch detours. He says he can’t do it. He finally talks her into it and says it’s him and he can’t afford to get injured and he’s already fallen twice. #RxForLove worries they are in last place as they head to the detour.

#TeamNewKid takes 4th place and Phil asks them about their date night. The hairstylists make it on their second try at the chair detour. Bergen and Kurt are thrilled with 5th place and #TeamJJ takes 6th. Jackie says Jeff is perfect. Jeff says they are definitely moving into a relationship. Rochelle and Mike get to the noodle shop in 8th place. She gives him too big of a mouthful and he has to spit back into his bowl. She slurps down a huge mouthful. The hairstylists make it in 7th.

Hayley and Blair are at the ice challenge. The truck stop lovers get their clue and Mike says an eating challenge was right up their alley. #TeamTuskegee shows up to the noodle shop and they’re excited because they’re hungry. Blair falls and then says she should go first and let him finish. Rochelle and Mike are happy to make it in 8th place. #RxForLove makes it at the last second and they run out. #TeamTuskegee is finishing up their noodles.

Libby and CJ get their clue in last place. Hayley and Blair are in a cab headed to the pit stop. They come in 9th for this leg. Libby and CJ are in 10th place and Phil tells them they’ve been eliminated from the race.