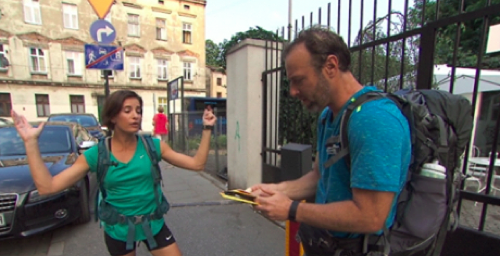 Tonight on CBS the Emmy award winning show The Amazing Race hosted by Phil Keoghan returns in an all new Friday November 13, season 27 episode 8 called Get in “Krakow, I’m Gonna Get You,” and we have your recap below. On tonight’s episode, the race continues in Krakow, Poland.

On the last episode the race continued in Rotterdam, Netherlands, where one team risked falling to the back of the pack when they stopped to sightsee, and the pairs took a big jump when faced with a Double Dutch Detour. Did you watch the last episode? If you missed it we have you covered with a full and detailed recap right here for you.

On tonight’s episode as per the CBS synopsis, “teams hit the town in Krakow, Poland with local street musicians to earn a hard day’s pay.”

#AmazingRace begins in the Netherlands and we see Diana crying about making bad decisions in the last round. Justin says things like this make them stronger. They are first to leave and fly to Krakow, Poland. They have to book flights on the Travelocity app. They pick the earliest arriving flight using the app. Now they head out and grab a cab to the train station then head to the airport. Kelsey and Joey leave in 2nd and can’t get seats on the flight they want. Tiffany and Krista have a later flight as well. Tanner and Josh seem to be on the same flight as they depart in 4th place.

Logan and Chris leave in fifth and Denise and James in last place. Justin and Diana leave on the first flight and don’t see any other teams there. The rest of the teams are on the second flight. Justin and Diana grab a cab and head to Krakow Beach. They have to look for a barge with a swimming pool on it. They spot a clue at the bottom of the pool and Justin dives in to get it. There’s a detour where they choose Mine or Music. They can either go to a salt mine 1,000 feet underground and fill a car with salt to get the clue. Alternately, they can go get a lesson from a violinist and have to move a piano then earn tips.

Justin and Diana head to the salt mines as the other teams arrive. Denise and James leave in first but their driver is slow and allows the other cabs to pass them. Justin and Diana make it to the mine entrance and head inside. They change into work clothes at the #Detour. They get onto the elevator and head deep down into the mine. Diana is claustrophobic but they press on. They get the heavy beam and Justin carries it. They deliver then start shoveling salt into their mine car. Justin says this is literally backbreaking work. The other teams make it to the pool on the river.

Logan jumps in fully clothed and grabs theirs. Josh jumps in next and then one of the cheerleaders. James grabs theirs. The teams head out. Denise and James, the cheerleaders and Kelsey and Joey go for music. The others choose the mine. Now it’s a fight for taxis. Chris and Logan run across the road and nab a cab to the salt mine and are first of the next group to get a move. Josh and Tanner are frustrated they can’t get a taxi and start ranting. They walk right past one. Jason and Diana fill their cart and now have to push it and it’s a chore. Kelsey and Joey are first to the music challenge.

They show them how to play the piano notes required. Kelsey tries to master it. Justin and Diana deliver their salt and get their clue to go to the Oskar Schindler Factory. James and Denise make it there and start playing music while the paparazzi couple make it to the mine. Kelsey gets thumbs up and they can move their piano. Denise and James also move their piano. Justin and Diana make it to the museum and take a moment of reflection before moving on with the race. They get their next clue after a brief tour. The music people set up and start playing.

Chris and Logan start shoveling salt. She says he likes blue collar things he can manhandle. She wants to pace themselves and then he dumps the wheelbarrow and starts putting it in by hand. The miner laughs at them. Justin and Diana are at Serve it Up – a #Roadblock where they must memorize Jewish dishes and deliver meals. The musicians start performing and start busking for money. Kelsey is begging for money and chasing people for cash. Denise does the same. The cheerleaders are less successful.

Chris and Logan are pushing their salt cart after they fill it. Josh ad Tanner are lost and are not at the mine. They wander around. Justin is doing the food challenge. Joey gets kisses and cash from older ladies. Kelsey begs a guy and gets the last of the money they need putting them in 2nd place. James dances around and a woman came over and gave them the money so they would stop and go away. He hugs her in happiness.

Tanner and Josh finally make it to the mine at last. Chris and Logan get their clue and head out in 3rd place. The cheerleaders are doing terribly and are whiny.

The cheerleaders count and they are only at 35. Tanner and Josh run their log then start shoveling. Justin works on assembling his tray of food. He takes it to the restaurant as Kelsey and Joey tour the Schindler Museum. The cheerleaders finally get down and get their clue putting them in 5th place. Tanner and Josh start pushing their cart. Justin got his tray right the first time and they get the pit stop clue in 1st place. They find Phil and dance to traditional Polish music. Phil says it’s their third win in a row and the fifth overall. They win a trip to China.

Phil says there was a u-turn in the next leg and this gives them a chance to beat the teams there. Kelsey and Joey are sweating it because they know Denise and James are right behind them. Kelsey and Joey get to the restaurant road black and Denise and James. Kelsey and James are doing it. The cheerleaders make it to the Schindler Museum. Chris and Logan are also there and Chris says half his family are Jewish so this means a lot. Tanner and Josh are in last as they leave the mine and head to the museum. James heads out with his tray as the cheerleaders pull up. Kelsey brings her tray and gets the next clue.

James shows up with his tray and also gets his clue which puts them in 3rd. Kelsey and Joey meet with Phil at the pit stop followed by Denise and James. Phil asks how they’re going to slow down Justin and Diana. Tiffany is clueless and she just guesses about the food instead of asking. Chris and Logan get their and Logan and Chris argue. He insists and she finally gives in. Tiffany is told her tray is wrong and she can barely hold it. Tanner and Josh are at the Schindler Museum and they think that being upset about the race is not that important when it’s put into perspective.

Tiffany gets help from someone else to identify the dishes. Chris loads up the tray but doesn’t ask for help and gets it wrong. Then he heads back. Tiffany heads out again for another try as Tanner and Josh show up. Tiffany makes it there with her tray and aching arms. She’s told it’s wrong again. Chris gets more advice on the dishes and tries again. Tiffany and Josh decide to work together. Chris gets it right and they get their clue to put them in 4th place. Tanner and Krista prep their trays and he lets her go first since she helped him.

The cheerleaders head out and then the football players run to see who could be sent out. The cheerleaders hit the mat a moment before them which puts team Texas in last place. Tanner and Josh says they saved them and they weren’t going to run past them. Phil says it’s a non-elimination round. Phil says Josh and Tanner will face a speed bump in the next leg and there’s a u-turn.