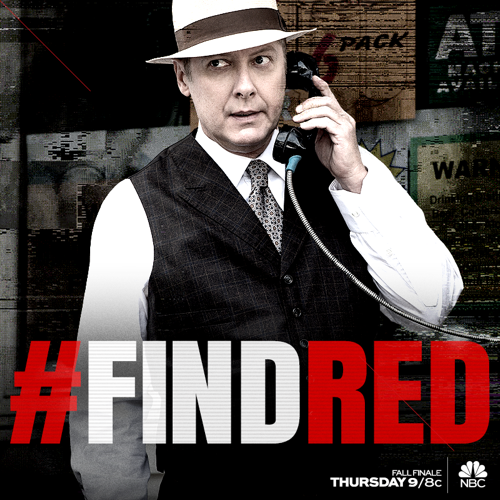 Tonight on NBC their criminal drama, The Blacklist starring James Spader continues with an all new Thursday November 19, season 3 fall finale called, “Kings of the Highway,” and we have your recap below. On tonight’s episode, Red (James Spader) and Liz (Megan Boone) are separated when Red falls into a perilous situation.

On the last episode Samar’s tragic past resurfaced when the team tracked an elusive international terrorist. In other developments, the FBI and the Cabal make significant strided in their search for Liz and Red, and Tom faces obstacles in his plan to exonerate Liz. Did you watch the last episode? If you missed it, we have a full and detailed recap right here for you.

On tonight’s episode as per the NBC’s synopsis, “Red and Liz are separated when Red falls into a perilous situation. Elsewhere, Samar makes a risky choice to help Liz, and Tom and Cooper continue their quest to exonerate Liz.”

Tonight’s episode of The Blacklist is going to be great and you won’t want to miss it. So pop some popcorn, grab a snuggle buddy, and definitely tune into this amazing series! Hit the comments and let us know if you are excited about the season 3 fall finale.

Tonight’s episode of “The Blacklist” kicks off with Dembe standing outside of a store, he is waiting to meet one of Red’s pals named Ian. Red and Elizabeth are on the road – Red calls and checks in on Dembe, he reassures him that they are only an hour away. Red and Liz stop at a gas station and Liz goes to use the restroom. When she is done washing up, she heads outside and Red and his car are gone – he seems to have vanished.

Elizabeth panics and asks the gas station attendant where he went – it’s as if Red is a ghost, no one saw any trace of where he went. She calls his phone over and over, Red doesn’t answer. She calls Dembe, and he has no idea where Red went – he is still waiting at the store. Elizabeth calls Samar for help, she traces Red’s phone number and tells Elizabeth that he is at a salvage yard and gives her the address. Samar hangs up, and Ressler comes out of her bathroom – apparently they are sleeping together.

Ressler heads to work, he meets with the Seargent and tells her that Cooper sold them out. He gaves Elizabeth and Red a heads up, and he is working with Tom Keen. The Seargent tells him to get all of the information he can on Cooper and Keen. Meanwhile, at Cooper’s house – men have come for Karakurt. Tom and Copper wind up in a shoot-out with the men in the middle of his kitchen.

Samar arrives at work, Aram takes her aside. Ressler is acting strange, he gave Aram his laptop and told him to find out what was searched for on it. It’s the laptop that Samar used to trace Red’s phone – he must have overheard. Samar begs Aram not to tell Ressler that she ran Red’s phone number. It’s obvious that Aram is suspicious, he wants to know why she was near his laptop and not her own.

Elizabeth arrives at the salvage yard, she finds Red’s car abandoned. Inside the back seat there are blood stains, and Red’s cell phone is lying on the floor. Red has totally vanished. Meanwhile, Red wakes up at an undisclosed location – two redneck guys and a woman are standing over him, he is chained to the wall inside of a trailer. The two guys are referring to Red as “merchandise.” Red laughs, he can’t believe that he has been nabbed by “Kings Of The Highway.” They are basically higway pirates that pick up motorists, drain their bank accounts and ATM cards, and then dump them on the side of the road. The leader, a guy named Cash, starts going through Red’s bags – he finds half an arsenal and a Florida drivers license that says Red’s name is “Kenneth.”

Aram visits Ressler in his office, he says that he wants to know the protocol – what will happen to Agent Keen if they catch her. Ressler reassures Aram that they will hold Elizabeth there to make sure that she is not injured and receives a fair trial. Aram confesses that the search on his laptop was on Red’s cell phone – they are located in West Virginia. Ressler storms downstairs and confronts Samar, she confirms that she has been helping Red and Elizabeth – she is the one that tipped them off, not Cooper. Ressler fires her, he tells Samar that he wants her gone by the end of the day, he is furious that she betrayed him.

Elizabeth is at the salvage yard – the owner tells her that a tow truck dropped Red’s car off, it was driven by a guy named Jasper. He tells Elizabeth that she can find him at a local bar. Elizabeth heads straight to the bar and tracks down Jasper – she starts flirting with him and introducers herself as “Kenya.

Meanwhile, Cooper and his wife Char are in the car with Tom Keen and Karakurt. Karakurt confesses that he has a tracking chip embedded in his chest, that is how the Kabul found him. While they are driving, two more men on motorcycles arrive and start chasing them. Cooper manages to wreck them – they drive to an underground tunnel, that way they won’t be able to track the chip in Karakurt.

Inside the tunnel, Harold and Char are keeping a look out while Tom prepares to use a knife to cut the chip out of Karakurt. Char tells Harold that she knows where there is a cabin in the woods in Roanoke – she has a kay. He is confused, and wants to know about the cabin – Char confesses that it is their neighbor’s cabin and she had an affair with him before Cooper got sick. Harold is shocked. Little do they know, Solomon and his men are in the tunnel, and they are gaining on them.

Back with Red, he managed to break loose from the poor quality handcuffs. One of the highway robbers come in the trailer to check on him and he overpowers him and steals his gun. Red is making a run for it, but the leader Cash catches him outside of the trailer and pulls a gun on him. Back at the bar, Elizabeth is seducing Jasper the towtruck driver – he invites her back to his place. Ressler arrives in West Virginia, he meets with the local police and they put out an APB on Elizabeth and Red. It isn’t long until the Highway Men see Red’s picture on the news and realize how much money he is really worth. Cash sends a picture of Elizabeth to Jasper’s phone and tells him who she really is and that she was on the news and is worth a fortune. He hangs up and attacks Elizabeth – she winds up shooting him in the leg.

Elizabeth takes Jasper’s phone and calls the highway men, she cuts a deal with them and they promise to give Red back if she brings them Jasper and $2 Million. Meanwhile, Ressler tracks down one o the highway men that went to the hospital after Red shot him, he lets the highway man go – so that he can lead them back to Red.

The Seargent pays Agent Hicks a visit at her house, she realized that she worked with Solomon in Africa. Hicks pulls out a gun and shoots her and kills her. The Seargent’s final words are “Tommy Markin.”

Elizabeth and Dembe meet up with the highway men, they make the trade and Red gets set free. Ressler and the police arrive, they arrest Dembe and Elizabeth makes a run for it in to the woods – Ressler chases after her. Red is safe, he makes it to a gas station and calls Elizabeth’s phone to worn her that the FBI are en route.

Ressler finally catches Elizabeth and tackles her in the woods – he handcuffs her and arrests her.