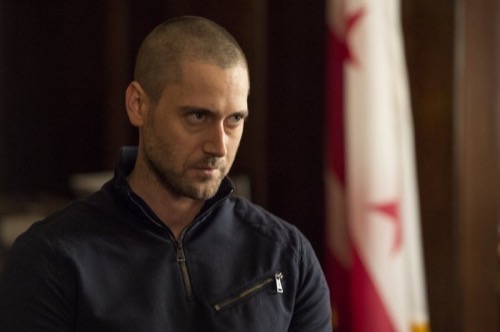 Tonight on NBC their criminal drama, The Blacklist starring James Spader continues with an all new Thursday March 19, season 2 episode 16 called, “Tom Keen” and we have your weekly recap below. On tonight’s episode, Evidence mounts against Liz in a murder case, triggering Red [James Spader] and Ressler’s [Diego Klattenhoff] efforts to clear her name by tracking down the recently vanished Tom Keen. [Ryan Eggold]

On the last episode, when Agent Keen (Megan Boone) was questioned in court as a suspect in the murder of the DC Harbormaster, her unusual relationship with Red (James Spader) and their task force fell under scrutiny. Meanwhile, Red enlisted Cooper (Harry Lennix) and Ressler (Diego Klattenhoff) to locate “The Major,” a dangerous former associate who was key in keeping Liz out of prison. Amir Arison, Mozhan Marno and Ryan Eggold also starred. Did you watch the last episode? If you missed it, we have a full and detailed recap right here for you.

On tonight’s episode as per the NBC’s synopsis, “As evidence mounts against Liz (Megan Boone) in the case of the murdered DC Harbormaster, a federal judge makes it clear to her that she will face severe criminal charges. Reddington (James Spader) and Ressler (Diego Klattenhoff) jump into high gear to exonerate Liz but the only solution is to find the recently vanished Tom Keen – wherever he may be operating in world.”

Tonight’s episode of The Blacklist kicks off in Germany, Tom Keen is running down an alley chasing after a man – he begins beating him in front of his boss until the man gives up and empties his pockets and takes something out of hiding in a lamp post and hands it over Tom.

Meanwhile, Elizabeth is sitting with the judge – he shows her the bullet they found on the boat, and accuses Elizabeth of lying n court. Elizabeth testified that she never seen Sam, but they found a bullet from her gun that shot him. Elizabeth insists that she didn’t kill Eugene Ames and that is the only truth that he needs to know.

At the office Ressler and Red reveal to Samar and Aram that Tom Keen is not dead – Red got information on him, he is in Germany working with a group of supremacists that sell drugs called the “Disenfranchised.” Ressler and Red prepare to travel to Germany to bring Tom back and get Elizabeth off the hook for murder. As they are leaving, Liz arrives and demands to know what they are doing. Elizabeth doesn’t think that they should bring Tom back – she says he doesn’t deserve to go to prison for the rest of his life because she was the one that help him captive on the boat. Red doesn’t want to hear it – he refuses to let Elizabeth be indicted for murder.

Ressler and Red arrive in Germany – Red searches for a contact he has with the Disenfranchised named Franz Beckham. In the car Red briefs Ressler on Tom’s new identity, he reveals that Tom is a covert operative and whenever he takes on a new persona it is totally believable because Tom convinces himself that he is that person.

Liz is making a strange phone call and having her bank account closed and transferring all of her money – Harold barges in and shouts at her for making him lie under oath. Elizabeth snaps that she did all of it so that she could get Berlin, and make him pay for what he did to Cooper and Meera. While they are arguing Harold’s nose begins bleeding and he drops to the floor and has a seizure, Elizabeth shouts for help.

Red visits Franz, he had his shipment of guns picked up by the police. He tells Franz that he can get the guns back for him, in exchange for 30%. Red announces they are partners now, and says that he will handle the negotiations and talk to the buyers for him. Later that night Red heads to a warehouse with the gun shipment to meet the buyers – it’s Tom and his new boss in the Disenfranchised. Red tells Tom that he needs to come home because Liz is in trouble, Tom tells him that it is not happening.

Red and Ressler leave the warehouse – Red gets a phone call from Tom. Tom snarls that Red blew his cover and he was on assignment. Red reveals that Elizabeth is being indicted for murder for killing the harbor master. Tom snaps that Red doesn’t even care about Elizabeth, and he is just using her. He says he s not going down for Red or for Elizabeth and then he hangs up and breaks his phone so that Red can’t call him back.

Liz is sitting in the hospital with Harold’s wife, he is still unconscious. Harold’s wife confesses to Liz that Harold has a brain tumor, he was accepted in to an experimental case study and receiving chemotherapy – but it apparently isn’t working. Liz promises not to tell the rest of the team what is wrong with Harold.

Liz heads to court, moments before she is about to be charged with murder a guard rushes in and says that they have a situation on their hands. They bring Tom in to the court and he confesses to the judge that he is the one who murdered Eugene Ames. The judge points out that Tom Keen s supposed to be dead – that is what Liz told him. Tom heads in to the judge’s chambers with him and confesses in detail to killing Eugene. Tom insists that Liz is innocent, actually she begged him not to kill Eugene.

At the hospital, Harold is awake now – Liz heads in to his room to visit him. She apologizes for putting him in the position she did. Liz professes that he is the only person in the world that she trusts. Harold explains that he is not upset with her, he is upset because he doesn’t want to lose the “good person” that he met when she first joined the task force.

At court, the judge tells Tom that even though he confessed to murder – Elizabeth will probably still be tried for murder, lying in court, and possibly even kidnapping. Tom argues that she is innocent, the judge agrees to make sure that Elizabeth isn’t charged with murder, but says that she may be charged with other crimes. A representative from the Attorney Generals office named Connely barges in and tells Tom that there will be no deal. Connelly kicks Tom out of the office and tells the judge that he has no authority to even be hearing the case, its federal information and he is in over his head – he threatens the judge’s job and tells him to squash the subpoena immediately.

At the hospital Harold’s doctor pays him a visit – he tells him that the treatment he has been receiving has actually slowed down the growth of his tumor. Harold’s health is actually improving – the nose bleed and seizure were actually a side effect of the chemotherapy treatments. Harold is being released from the hospital.
In court the judge returns and begins ranting about how corrupt the government – he announces that he has decided to squash the subpoena because Elizabeth and Harold’s testimonies can divulge federal secrets.

Detective Wilcox sneers to Elizabeth that she has to live with what she did for the rest of her life, then he storms out of the court room. Liz is free to go – she asks Connelly what is going to happen to Tom. Connelly scoffs that he never met anyone named Tom Keen, and there is no one named Tom in federal custody.

Connelly visits Harold in his office – Harold said he can’t believe that he made it all go away. Connelly tells Harold that he respects him for lying under oath for one of the members of the team – he says that the task force working for Reddington does good, and they would do worse to protect them.

Elizabeth is on the phone with her bank, she had all of her money transferred to an anonymous account to pay for Eugene’s daughter’s college tuition. Red joins Liz – he tells her to be careful, she can’t look out for Eugene’s daughter forever. For the first few years it will make her feel good to be her invisible benefactor, but it won’t last, it is all a fraud. Liz is just going through the motions to save herself form her own guilt. Liz receives a phone call from Tom – he asks her if she is okay.