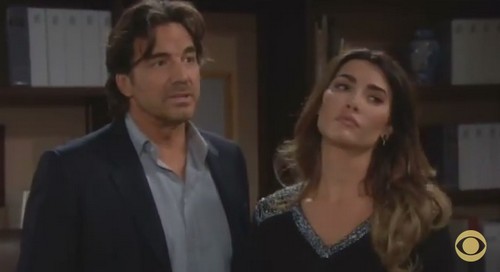 The Bold and the Beautiful spoilers are dishing on the new President of Forrester Creations and her apparent power trip on one of its employees. In this potential B&B world Ridge’s takeover plans have been successful and Steffy has been installed in a head position at FC. Liam Spencer [Scott Clifton] (Vice President) wanted a much better working environment for his girlfriend Ivy Forrester [Ashleigh Brewer] and his cousin Caroline Spencer [Linsey Godfrey] at Forrester Creations. Liam, along with his ex wife Steffy Forrester [Jacqueline Macinnes Wood] and her father Ridge Forrester [Thorsten Kaye] (new CEO) are now the new head management team in charge at FC.

Things should be better, right? Yes, all with the exception of Ivy Forrester. More Bold and Beautiful news is reporting rumors of poor Ivy’s working conditions going from bad to worse as Steffy pulls rank on her Aussie cousin every opportunity she can! Ivy can’t report her to Liam or Ridge for fear of losing her own job. In additional Bold and the Beautiful spoilers, Ivy decides to team up with Uncle Eric Forrester [John McCook] and his son Rick [Jacob Young] secretly to remove the new leaders at Forrester Creations! Yes, Ivy jumps ship and betrays ‘her team’ and sides with the old guard, can you blame her with superior Steffy lording it over her?

As the situation looks to get better for Ivy, Steffy finds out what her competition is up to and threatens Ivy she will go to Liam and expose Ivy’s deceptions. Of course, Steffy naturally can’t help herself and tries to make Ivy look bad in Liam’s eyes, by informing him, his little ‘Miss Goodie Two Shoes’ girlfriend is trying to undo what they have worked so hard for, control of Forrester Creations. Ivy knows if she hopes for any future with Liam, she must get Steffy out of the picture once and for all… no matter what and no matter how! Ivy can’t afford to have Liam learn of her betrayal, especially from Steffy.

Will Ivy be willing to risk her own reputation and play nasty just to keep her main man? Or will it take another Spencer brother to make Steffy happy? More B&B teasers are reporting that Steffy tries to make Liam jealous by using his brother Wyatt Spencer [Darin Brooks]. Its only natural, she already had the father Bill Spencer [Don Diamont] and his first son Liam, why not move on to the next brother?! We want to know, are you #TeamIvy or #TeamSteffy? Come back to CDL for more The Bold and the Beautiful spoilers and updates?