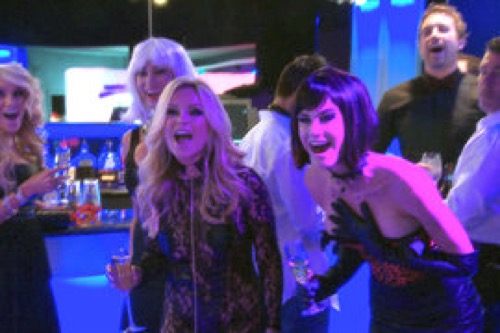 The Real Housewives of Orange County returns to Bravo tonight with an all new Monday August 31 season 10 episode 13 called, “Sex, Lies and Leeches,” We’ve got your recap down below! On tonight’s episode, Heather Dubrow’s luncheon ends with a bang as Vicki Gunvalson storms off, upset with Meghan King Edmonds for continually questioning Brooks’ cancer treatment. Shannon visits Dr. Moon to help deal with pent up resentment.

On the last episode Meghan, Heather, Tamra, and Shannon headed to NASCAR while Vicki enjoyed a birthday getaway with Brooks. Later, Shannon tries to put on a happy face during her birthday dinner with David and her girls. Heather throws a luncheon at her unfinished home, where Meghan confronted the OG of the OC. Did you watch last week’s episode? We did and we recapped it right here for you.

On tonight’s episode per the Bravo synopsis “Heather’s luncheon ends with a bang as Vicki storms off, upset with Meghan for continually questioning Brooks’ cancer treatment. Shannon visits Dr. Moon to help deal with pent up resentment. Tamra hosts a wild “Sex Party” that has Heather covered in blood and Vicki going for blood as she not only confronts Meghan face-to-face, but also goes after Meghan’s husband, Jim Edmonds.”

Meghan says that, well, if she’s a young girl, what is Vicki. Heather says Meghan is just trying to say that she cares, but Vicki says that she doesn’t think Vicki says. She tells Meghan that if she cares, she should keep her opinions to herself. Meghan asks why he wouldn’t adopt the most effective treatment, and Vicki asks her if she really thinks Brooks wants to die.

Heather says that Meghan is going through this in her own life, so she is concerned. She says in confessional that because she is dealing with her stepkids’ mother having cancer, she would be confused that he would stop treatment.

Tamra excuses herself to go to the bathroom, and Shannon says she’s going too. Meghan says “they’re going home” after they storm out.

Meghan starts crying for attention, and Heather walks up to her and says that she understands her but she needs to back off because for whatever reasons, they want her to back off. “That’s stupid,” says Meghan, confident in her expertise as a medical professional who is personally working with Brooks.

She tells Lizzie that Vicki is a “bitch,” and she tells her that Vicki can be tough and she pushed her buttons. Lizzie says the problem is that Meghan doesn’t care how Vicki feels. Meghan says it’s because she doesn’t listen to her. Lizzie tells Meghan that to Vicki, she is a little girl.

Vicki can be heard shrieking loudly in the hallway, where she is saying that she is mad anyone would even question what Brooks is doing or whether he wants to live. She says that she doesn’t want to see Meghan ever again. “I’m a little weak right now,” she says before suggesting they pray and saying that she wants nothing bad to happen to him and is hoping every decision he’s making is the right one. She breaks down crying, and Heather, who is now out there, hugs her. “Shame on everybody,” she says.

When everyone goes back to the table, everyone wants to stop talking about it, but Meghan says she was not coming from a place of malice.

To lighten the mood, Tamra announces that she just launched her fitness business’ YouTube with a “sex tape.” She says she’s having a “sex party” tomorrow night to launch it. She says she wants everyone to wear their sexiest outfits.

Shannon meets up with her doctor, who helps her with her psychosomatic symptoms relating to her husband’s affair. She says in confessional that the doctor finds that she holds in resentment. “I don’t want to have any resentment,” she says. “I don’t.”

The doctor recommends an “angry eye exercise” to help her release her anger. It’s difficult, but he says she will learn how to do it with practice.

Vicki meets up with her son, Michael, who has come from San Diego. She tells him she is still really sad about her mother, and can’t go an entire day without crying about it. He asks her if she wants to order any appetizers.She tells him that Brooks wants a commitment from her, and he says that he doesn’t care.

Vicki says in confessional that she would love nothing more than for Michael and Briana to be able to be in the same room together.

Vicki talks about her mother’s death again, saying that she didn’t think two years ago that her mother would be dead. Michael brings up that she had thought about that being a possibility that she might die. Vicki says she thought she would get sick first.

He says he’s had friends whose parents die when they were ten years old, which is really hard. He says that 83 is a pretty long life. Vicki tells him that when she dies, he will be fine because she has insurance. “Thanks,” he responds.

Tamra is getting ready for her steamy “sex party.” She tells Eddie that she doesn’t know if Brooks and Vicki are coming, and tells him about the huge fight between Vicki and Meghan. She says she’s told everyone just to have fun tonight and avoid the subject.

David and Shannon talk about the disastrous dinner the family went on for Shannon’s birthday, one year after he had birthday sex with her and then left to sleep with his mistress. Shannon says in confessional that she just thought her birthday would be something more than a sports bar on a week night.

David tells her he is sorry it didn’t meet her expectations because he really tried to make it special. Crying, Shannon says she isn’t even allowed to say that she wants to be able to replace the memories of the past.

She says in confessional that sometimes she feels pressure from David to forget about the career, but she is entitled to take the time that she needs because what has happened to her and her family was horrendous. She says that many other people would have walked in that situation, “especially people in Orange County.”

Tamra holds her “sex party,” which features a “sex swing” (‘a swing you can have sex on’) and a naked woman covered in sushi that people were picking up and eating.

Heather comes to the party holding Terry by a leash. Tamra wears a black lace bodysuit.

Vicki comes wearing a boring all-white dress, which Meghan considers an asshole move and a “fuck you” to the theme of the party, she says in confessional.

Tamra plays the commercial. In the beginning, close ups make it appear that she and Eddie are having sex until someone walks in on them, turns on the light and asks them what they’re doing. ‘We’re exercising. What do you think we’re doing?’ Tamra says.

After this, Tamra tells everyone that she is about to be baptized for the first time in her life. She says that she will be talking to a pastor. Eddie turns to her, saying he didn’t know she was into religion like that. Tamra says she thinks it’s a personal choice. She asks him if he doesn’t think she’s a weirdo, and he says that she does a lot of weird shit and he has never called her a weirdo.

Heather and Terry tell Vicki about “leech therapy” they underwent that is supposed to make them look younger. They show her the area, over which they have had to tape maxi pads (the leech therapy causes you to bleed for over 24 hours). Heather is bleeding out of her stomach and has to ask Tamra if she has a replacement dress.

In the bathroom, Heather removes the pad to show Vicki and Tamra the bleeding, which makes Vicki gag. Terry also shows his.

Vicki and Meghan get into a fight when Vicki says she isn’t a nice person because of what she recently implied about Brooks possibly not having cancer. “Actions speak louder than words,” Vicki says when Meghan tells her not to say that about her.

Meghan calls Jimmy over, and Vicki insults her for needing her husband to defend her. When Meghan tells Jimmy what Vicki says, Vicki admits to saying all of it, adding that he hasn’t seen her in action (‘I’ve seen her in action, trust me’ Jimmy responds) and that she feels sorry for him. She then repeatedly tells Jimmy that Meghan is “classless.”

Shannon has been in the background this whole time, repeating that what is offensive about what Meghan said was the assertion that Brooks wasn’t really ill. “I never asked you for your opinion. That’s what you don’t understand! Stay out of it!” She calls Meghan “crazy” and says she needs to concentrate on her family. Meghan tells her she has blinders on and doesn’t see the world for what it really is.

Meghan then expresses that she was just concerned about Brooks. “We’re in the same place,” Vicki says. “Goodbye.” “

We weren’t going to talk about it!” Tamra screams.

Jimmy repeats that Meghan never said Brooks didn’t really have cancer, and was just concerned about his treatment. He concedes that Meghan is crossing boundaries, but says she was just t..