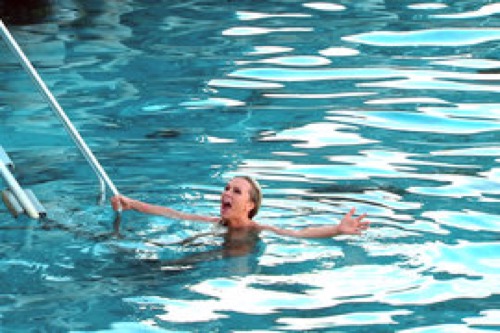 The Real Housewives of Orange County returns to Bravo tonight with an all new Monday August 3 season 10 episode 9 called, “Swimming With Sharks,” we’ve got your recap down below! On tonight’s episode, t’s not all fun in the Tahitian sun as the women of the OC travel to the island of Moorea. When they go swimming with sharks, Meghan King Edmonds discovers that the real danger isn’t in the water.

On the last episode when Meghan hosted a couple’s game night, her husbands’ absence became fair game for gossip with the other ladies. Meanwhile, Shannon and David met with their therapist. Later, the women headed off for a tropical get away to French Polynesia, but the road to paradise got bumpy when Meghan and Vicki didn’t see eye to eye. Did you watch last week’s episode? We did and we recapped it right here for you.

On tonight’s episode per the Bravo synopsis “it’s not all fun in the Tahitian sun as the women of the OC travel to the island of Moorea. When they go swimming with sharks, Meghan discovers that the real danger isn’t in the water. Later, the group splits up for dinner leaving Shannon, Vicki and Tamra to not only take numerous shots at the bar, but also a few shots at Heather and Meghan’s friendship.”

The group goes on a boat, at which point Vicki gets sick and rushes to the bathroom to vomit.

Tamra says in confessional that Vicki is throwing up, Meghan is getting on everyone’s nerves and Shannon spent the whole night up sick. She sarcastically says that this is a great trip. They then go to a glamorous beach resort.

Later, at the restaurant, Vicki returns her meat for not being well-done enough and Tamra complains about eating scallops. Meghan is annoyed by them. She then cringes as she eats something that is extremely hot.

Vicki says Brooks doesn’t want to go back to chemo because he thinks that it’s going to kill him. Tamra insists that he should do the chemo. She asks how you get rid of the cancer without chemo. Vicki says you starve the cancer so it doesn’t have anything to feed off of. Shannon says in confessional that chemo is not the only way to get rid of cancer and Brooks really should go to her doctor.

Vicki says she had a pregnancy test ordered for Lizzie to use. Lizzie takes the test, which comes out negative.

The next day, Tamra and Vicki encourage Meghan to have kids. She says she already has four. The two of them tell her that those aren’t her kids and that it’s different from having your own kids. Meghan asks them if they have ever had stepchildren, and Tamra says no.

Vicki tells Meghan she will never know the difference until she had kids. Meghan tells Tamra that she has never had stepkids so she has to admit that she doesn’t know.

Meghan says she has been involved in the kids’ lives for two years. Vicki says that isn’t a lifetime and it’s different from having your own children.

Vicki says in confessional that Meghan is not a mother, she is a newlywed stepmother and needs to mind her place.

Meghan starts crying, saying that it’s hard to be a stepmom and the only love she knows is her stepchildren. She says she wants to have her own children, but the love she has for them is so deep. She says she is constantly reminded about how she doesn’t have biological children and wishes she was their mom. Tamra says that this is the reason she needs to have her own children.

The women go swimming in clear blue water full of sharks and stingrays. Vicki and Shannon get in the water and start screaming.

As they speed away on the boat, Shannon feels on Tamra’s boobs, saying she’s never felt fake ones before. In confessional, she says Tamra’s boobs are hard. She says they are somewhat spongy but hard. She says her natural ones are soft and she is happy they are natural and not hard.

They stop and get beer and pizza. Shannon leaves, saying she is going to call her kids. She talks to David on the phone who tells her that during the twins’ first sleepover they went to bed at 2 a.m. after TPing a neighborhood at midnight, during which Stella, a star basketball player, got stuck on a fence and injured her foot.

Meghan, Lizzie and Heather go out to dinner together, which Shannon, Vicki and Tamra skip. Meghan laughs at them in confessional for being old and too tired to go out and have fun.

Instead, the three of them drink and Vicki drives them around in a golf cart looking for a place to party. Vicki drives the golf cart right up to the bar, and they ask the staff if it’s even okay to park there. After being led to their table, Vicki tries to ask for Fireball shots but the waiter can’t understand them so he brings them vodka on the rocks with lemon.  As they down shots, the “young” people yawn at their dinner table.

Shannon, Tamra and Vicki discuss what they think the others are doing and who they think is whooping it up the hardest. Vicki says Meghan. Tamra asks her if she has issues with Meghan and she says no but she doesn’t understand some things Meghan does, like crying because she wants to be the mother of her stepchildren.

Meanwhile, Meghan complains to Lizzie and Heather about Vicki and Tamra telling her that her love will not amount to the same as a biological parent. Heather tells her that Vicki is never going to see her point because she has had to give up her children before. She says that doesn’t make Meghan’s feelings less valid.

Meghan tells Lizzie that whenever Vicki has talked to her about her family life with Jimmy and the kids, she hasn’t always had the nicest tone.

Lizzie says in confessional that she has gone through the same thing before and she thinks Vicki is testing Meghan.

Vicki receives a call on her cell phone (the others calling from their limo) and has a hard time answering because she’s so drunk. When she finally answers, she screams into the phone and the other three scream back. Vicki tells them there is no way they are having as much fun as they are. They all decide to meet up.

When everyone meets up, Vicki and Tamra drunkenly jump in the pool while Shannon brings them more drinks, telling them not to pull her into the pool. They drag her in anyway, the tray and classes falling in. One of them pees in the pool.