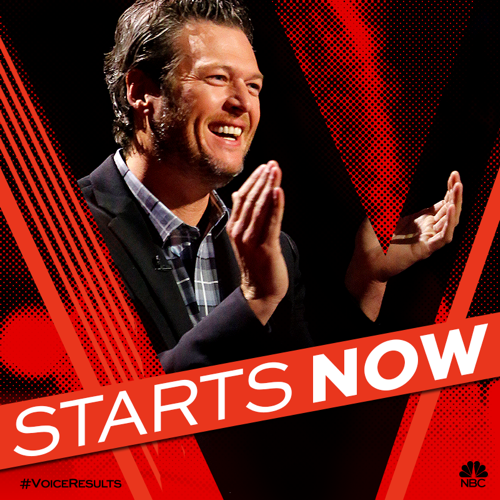 Tonight on NBC the Emmy award winning music competition The Voice continues with an all new Wednesday November 11, season 9 episode 17 called, “The Live Playoffs, Results,” and we have your weekly recap below. On tonight’s episode Top performers advance in a playoff-round results show.

On the last episode, the second part of the live playoffs continued. Did you watch the last episode? If you missed it we have you covered with a full and detailed recap right here for you.

On tonight’s episode as per the NBC synopsis, “the top 20 artists await America’s vote. The top two performers from each team will move through to the live performance shows and coaches Adam Levine, Blake Shelton, Gwen Stefani and Pharrell Williams will save one remaining artist from their team.”

Tonight’s season 9 episode 17 is going to be exciting. We’ll be blogging it right here for you. In the meantime hit up the comments section and tell us your thoughts on season 9 of The Voice.

#TheVoice begins with a group performance by #TeamGwen doing Ooh Child. Now it’s the first result of the night. Team Gwen is up first and we find out that Jefferey Austin is safe. Also safe is Braiden Sunshine. Now Gwen gets to choose one of the remaining artists to advance. It’s Regina, Ellie, Viktor and Korin. She decides to save Korin Bukowski. Ellie Lawrence, Regina King and Viktor Kiraly are eliminated. We then see a Veteran’s Day message from the First Lady.

Last season’s winner Sawyer Fredericks performs Take It All. There’s a cool Nissan ad with Blake and Sawyer. Next is a performance from #TeamBlake.

Now it’s results time for Team Blake. First to learn they are safe is Barrett Baber followed by Zach Seabaugh. Blake now has to make his choice among Emily Ann, Ivonne, and Nadjah. Blake says this sucks and says he’s sorry then he goes with Emily Ann Roberts. Team Pharrell performs Everybody Hurts. Then we find out that America saved Team Pharrell’s Madi Davis and Evan McKell. Now it’s up to Pharrell who sweats it then saves Mark Hood.

#TeamAdam sings Diamonds by Johnnyswim. We found then that America has saved Jordan Smith, Shelby Brown, and then it’s time for Adam to choose. He is in agony over it and then tells the audience to be quiet then he chooses Amy Vachal.

Next week is the top 12 in live competition. Join CDL then for live recaps of all the action on The Voice.