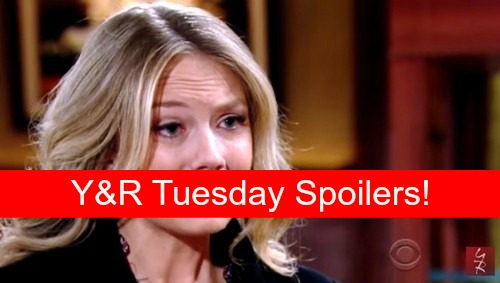 “The Young and the Restless” spoilers for Tuesday, December 15, tease that Dr. Anderson’s (Elizabeth Bogush) plan could hit a snag. Dr. Anderson was worried when she learned that Nick (Joshua Morrow) and Sharon (Sharon Case) live so close to each other.

If Nick stops by to see Sully too often, he might start to recognize him as his own son, Christian, who he believes is dead.

We’ll have a chance to see if Nick’s memory gets jogged when he gazes at Sully on Tuesday. Y&R’s preview video shows Faith (Alyvia Alyn Lind) asking Nick if he thinks Sully looks more like Sharon or Dylan (Steve Burton). Nick will have a puzzled expression on his face as he stares at the infant.

Will Nick sense that there’s a connection – does he recognize Christian? It’s possible, but Nick may chalk it up to grief if he feels something special for little Sully.

Meanwhile, Victor (Eric Braeden) and Billy (Burgess Jenkins) will be at it again. “The Young and the Restless” spoilers say Victor will shout that Billy is responsible for the downfall of his family. Billy insisted on getting revenge and Victor believes he had no choice but to retaliate.

In reality, Billy’s actions were probably a convenient excuse to come after the Abbotts in a big way. Nevertheless, Billy may have to pay the price for his scheme.

Elsewhere, Abby (Melissa Ordway) will get updates on what happened between Stitch (Sean Carrigan) and Ashley (Eileen Davidson) during the fire. Abby will be stunned by the news that they declared their love for each other.

Ashley will be just as shocked to hear that Abby found out about it. Abby will demand answers from her mother about why she kept what could’ve been Stitch’s last words a secret.

Ashley will likely contend that they said some things they didn’t mean in the heat of the moment. Since they made it out OK, there was no need for Abby to get hurt by their spontaneous professions of love.

However, we all know that Stitch and Ashley meant every word. It sounds like this love triangle is about to get even more complicated. Stick with the CBS soap to see if Stitch and Abby’s relationship will eventually fall apart.