The Young and the Restless (Y&R) Spoilers: Ashley Talks To a Ghost – Chelsea Jealous as Adam Defends Sage Against Victor 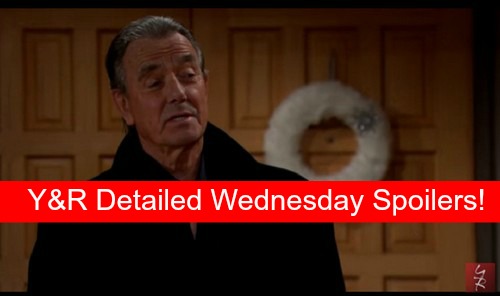 “The Young and the Restless” spoilers for Wednesday, December 16, tease that Ashley (Eileen Davidson) will get a little guidance from John (Jerry Douglas). Ashley will see John standing nearby and suspect that he’s there because of Victor (Eric Braeden). John will reply that he has something besides business on his mind and he’ll point to Ashley’s head. Ashley will suggest that she passed out because her blood sugar was low.

John will insist that Ashley needs to admit there’s a problem, but she’s a fighter. She’ll get through this. Ashley will wake up and head to Jabot. Jack (Peter Bergman) and Phyllis (Gina Tognoni) will be there bickering over Billy (Burgess Jenkins) and Marco (Peter Bergman).

Ashley will give Jack updates on her decision to step down as CEO. Jack will be puzzled by the news, but Ashley won’t offer an explanation. Ashley will tell Jack she loves him and they’ll hug before she departs.

Victor will show up at Chelsea (Melissa Claire Egan) and Adam’s (Justin Hartley) place to fill them in on the victory over the Abbotts. Chelsea will hope this means Victor is done with Adam at the company. Victor will reply that it’s Adam’s choice. Adam will mention their rebuilding efforts.

Victor will say he’s glad to see Adam reunited with Chelsea and he’s anxious to spoil Connor (Gunner and Ryder Gadbois) at Christmas. After a toast, Victor will declare that he’s proud of his son. Once he heads out, Chelsea will express concern about Victor’s control over Adam.

Across the hall, Sage (Kelly Sullivan) will chat with Nikki (Melody Thomas Scott) about her recent move. Sage will think the time away from Nick (Joshua Morrow) will be a good thing. Nikki will remember how she lost a baby with Jack (Peter Bergman). Sage will point out that their relationship didn’t work out. She’ll add that things may not work out with Nick either.

Victor will arrive and hint that he doesn’t like Sage living there. It’s the same place where Sage helped Adam pose as Gabriel. Sage will head over to Chelsea and Adam’s to complain. When Sage says that Victor wants rid of her, Adam will get fed up with his father. Adam will shout that Sage doesn’t even need to answer the door when Victor stops by. Chelsea will be surprised by the passionate reaction Sage seems to bring out of Adam.

Other “Young and the Restless” spoilers reveal that Dr. Neville (Michael E. Knight) will have a surprising request for Neil (Kristoff St. John). Dr. Neville will ask Neil to fund his research so he can share his amazing breakthroughs with the world. Neil will refuse to be blackmailed. Once Dr. Neville is gone, Hilary (Mishael Morgan) will say she wishes Neil had just given Dr. Neville what he wanted.

Neil and Hilary will argue over her love. Hilary will believe Neil feels the same way and she’ll be convinced that he’ll let everyone know soon. Meanwhile, Devon (Bryton James) will talk to Lily (Christel Khalil) and Cane (Daniel Goddard) about Joe (Scott Elrod).

They’ll discuss the fact that Joe was sentenced to six years in prison. Later, Lily will tell Cane that she wants to give their children one more Christmas as a family. Cane will go along with the idea.

Hilary will track down Devon and ask him to foot the bill for Dr. Neville’s research. Devon will admit that he doesn’t like Dr. Neville at all, but he’ll be willing to do it. Hilary will be thankful for Devon’s help. Devon will find Dr. Neville and say that he’ll write him a check to keep Neil out of jail.

Ashley will overhear them talking about Dr. Neville’s medical breakthroughs and she’ll ask for more info. Will Dr. Neville be able to improve Ashley’s health? Y&R viewers will be curious to see how this turns out. Stick with the CBS soap to see if Ashley will be Dr. Neville’s next guinea pig.