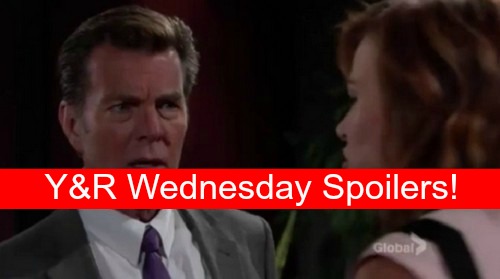 “The Young and the Restless” spoilers for Wednesday, December 16, tease that shocking reversals are in store for some of our favorite Genoa City residents. Dr. Neville (Michael E. Knight) will be pleased with progress Hilary (Mishael Morgan) has made in her recovery.

Y&R viewers know that Dr. Neville thinks he’s a genius when it comes to his revolutionary techniques. Now that he has proof that his methods work, Dr. Neville will want to make more breakthroughs.

In Wednesday’s preview video, Dr. Neville lets Neil (Kristoff St. John) know that the world is changing. Dr. Neville adds that he needs a grateful and motivated investor to help him out. Of course, the eccentric doc is talking about Neil. There’s no denying that Dr. Neville helped Hilary tremendously and now it’s time for Neil to return the favor.

Dr. Neville will want Neil to understand the potential of his treatment. If Dr. Neville has the proper funding for his research, he could help more individuals who are in the same shape Hilary was in. Neil won’t be happy about Dr. Neville’s demands, but what can he do?

Neil owes Dr. Neville pretty big for all he did for Hilary. Besides, Dr. Neville could easily pass along some info to the police if Neil doesn’t do what he asks. It sounds like Neil could be blackmailed into going along with the plan.

Meanwhile, it appears Phyllis (Gina Tognoni) will have another tiff with Jack (Peter Bergman). In Tuesday’s episode, Phyllis is relieved when Jack calls off the press conference. However, they haven’t quite resolved the Marco (Peter Bergman) aftermath.

On Wednesday, Phyllis will remind Jack of their vows and shout that Jack didn’t even make it to their wedding night. Maybe Jack will find a way to make it up to his love.

Elsewhere, Victor (Eric Braeden) will give Adam (Justin Hartley) updates on his recent deal with Jack. “The Young and the Restless” spoilers say Victor will declare that the Abbotts have conceded defeat. Victor will joyfully deliver the news that the Newmans have emerged victorious in this battle.

Nevertheless, Victor might want to hold off on the celebration. Later this week, Adam will realize he has the power to turn the tables. Will Adam decide to stand with Victor or support Jack? Stick with the CBS soap to find out which side Adam will end up on.