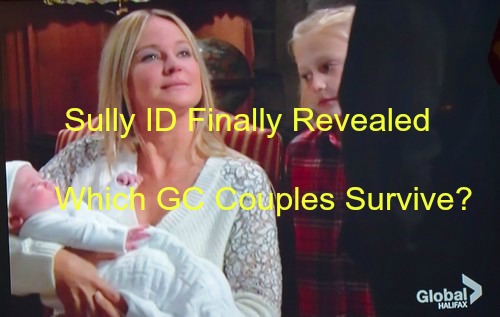 “The Young and the Restless” spoilers tease at a Chadam shakeup is in the works. Looking ahead in 2016, some of the consequences of Dr. Anderson’s [Elizabeth Bogush] evil deeds will hit Genoa City. When they are, it will shake up the lives of three couples—Adam Newman [Justin Hartley] and Chelsea Lawson [Melissa Claire Egan], Sage Warner [Kelly Sullivan] and Nick Newman [Joshua Morrow], and Dylan McAvoy [Steve Burton] and Sharon Collins [Sharon Case].

The secret of Sully’s identity as Christian threatens to explode and end the happiness of Sharon and Dylan. When the truth comes out, Sharon will be devastated that her happiness was not real once again. Dylan believes that Sully is his son, and wants to do everything in his power to protect him. How will he react when he learns that Sully is really his nephew, Christian?

Nick and Sage will have a huge emotional roller coaster to endure when they learn that Christian is alive. Not only is he not dead, but they have been around him daily since Sharon came home from Fairview. The secret will explode with yet another layer, a huge paternity reveal —not only is Sully really Christian, but he is not Nick’s son, after all.

That brings us to Adam and Chelsea. Even if Chelsea is not your favorite character, it is difficult not to feel bad at the pain she will endure in the coming months. Chelsea thought that once Adam was released from jail, they would have their lives back.

She would have the husband she always wanted and Connor would have the father he needed. Chelsea never expected to be in a position to have to share her husband with anyone—let alone Sage Warner!

In the next few weeks, Sage will learn her baby is alive, and will find his way home with his real mom. When that happens, head scribe, Chuck Pratt Jr., disclosed that there is a shocker waiting to come out—Adam is Christian’s father, not Nick.

The revelation will send shock waves through every fiber of Chelsea and Nick. They will feel completely blindsided by the news and will be unsure if they can continue on in their marriages. Given of course that Sage and Adam aren’t already hooking up again….

The real question will be if the news of Christian’s identity and paternity sends Chelsea and Nick into each other arms seeking mutual comfort. Pratt has teased the fans for months that something HUGE will happen, which will send Chelsea straight into Nick’s arms—and it looks like that ‘something’ might be Christian’s identity and paternity reveal?

When it comes out that Adam fathered Christian, will that piece of information be the straw that broke the camel’s back in Chadam’s relationship? Can they move forward knowing that Adam made a family unit with Sage?

Considering Sage and Adam’s increasing chemistry lately, can Chelsea accept the fact Adam must co-parent Christian with Sage? How will Sharon react to losing her child, and how will Adam help her in the transition? Additionally, we are anxious to learn what fate awaits Dr. Anderson when her horrible schemes come to light.

Don’t forget to check CDL later for more “The Young and the Restless” spoilers, news, and updates!