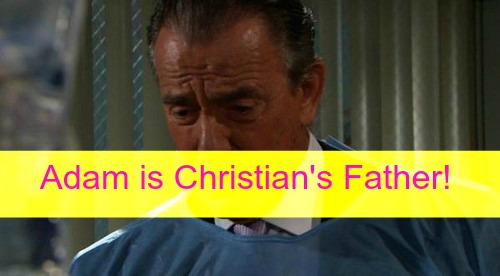 “The Young and the Restless” spoilers are in and it looks like Nick Newman (Joshua Morrow) may not be Christian’s daddy after all. Michael Fairman dropped a huge Y&R spoiler in a recent article: Adam Newman (Justin Hartley) is Sage’s (Kelly Sullivan) baby father, not Nick.

Poor Nick will have to deal with the heartache of losing yet another child due to a paternity shake-up. The real question is, how will the truth come to light about baby Christian’s paternity?

The most obvious way the show could write Adam is the baby’s father is by giving him Adam’s eye condition, a genetic condition. If the baby develops Adam’s special type of blindness, he would be his son even without a paternity test. Nick doesn’t carry the genetic gene that would pass on his blindness, even though they are brothers. Fans have speculated for months this will be how they undeniably reveal the paternity.

It is also possible that Sage will want to end the secrets and ask the Newman brothers to take DNA tests. It would be the honest and upfront way to approach paternity thus ending the speculation and heartache for one of the men.

Whoever is the lucky dad, they deserve to know so they can start to bond with the Newman baby boy. Michael Fairman revealed it appeared that the show would let Nick believe he was Christian’s father only to have the rug pulled from under him in a bombshell revelation that Adam is his father.

There’s also the small chance that Sage will be upfront and tell the men who one is the father unless she isn’t sure either. In Victor’s (Eric Braeden) eyes, the son who fathered him isn’t as important because he knows either way Christian is a Newman. Victor may not be the best father, but one thing is certain; he loves his grandchildren and wanted to give them everything he never had as a youngster.

Victor told Adam before he appeared in court that he cannot desert his son, Connor. Adam was upset with Victor for many years after feeling neglected so he must fight tooth and nail to stay present in his son’s life. He was speaking of Connor; however, if Christian is his son, he won’t allow his brother, Nick to raise his son as his own.

The only mystery in the paternity reveal is how the writers will unveil Christian’s biological father. Let’s just hope it won’t take them a year or more to drop the bomb that precious Nicholas Newman isn’t Christian’s real daddy. Don’t forget to come back for more juicy “The Young and the Restless” spoilers, rumors, and updates!