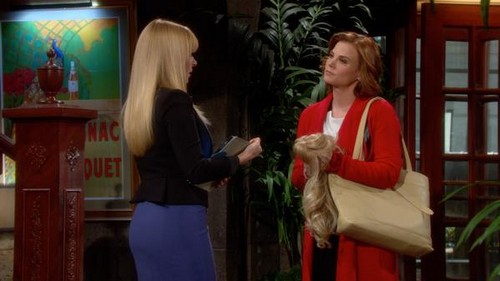 “The Young and the Restless” spoilers for Tuesday, January 27 tease another exciting and action-packed episode full of drama on the CBS soap. Rumors have been floating around for quite a while that Phyllis may truly be crazy – as a side effect of the medicine used to wake her up from her coma. “The Young and the Restless” spoilers tease that on Tuesday’s episode of the CBS soap Phyllis will agree to go see a therapist with Jack to discuss whether she did or didn’t try to kill Kelly (Cady McClain) by poisoning her tea.

According to “The Young and the Restless” spoilers, Paul Williams is on the case – and determined to get to the bottom of the tea poisoning incident, whether Kelly wants to press charges or not. Meanwhile, Kelly’s friends and family are beginning to wonder if she might be just as crazy as Phyllis (Gina Tognoni), and harboring an unhealthy obsession over Jack despite the fact that he has made it very clear where his loyalties lie.

In other “The Young and the Restless” news, spoilers for Tuesday reveal that Jill pays Victor Newman a visit and attempts to put a down payment on Chancellor – however, Victor (Eric Braeden) is uninterested. The villain informs her that there is no way she is getting the company until the entire payment is made and sitting in his account. According to Y&R spoilers – Victoria (Amelia Heinle) tries to discuss selling Chancellor and the Newman Family’s cash flow problem with her stubborn dad, but he refuses to listen to her.

“The Young and the Restless” spoilers for January 27 also tease that Y&R fans can expect to see Neil finally come clean with Hilary and reveal that he is undergoing experimental treatments to try and get his eyesight back. A thrilled Hilary can’t wait to share the news with her step-son/boyfriend Devon, they plan to break the news to Neil that they are in love as soon as he can see again.

So, Y&R fans, who do you think is crazier – Phyllis or Kelly? Do you believe the rumors that Phyllis will actually murder Kelly? Do you think Victor will finally cave and sell Chancellor to Jill, or is he just sending her and her family on a wild goose chase? How will Neil react when he learns the truth about Devon and Hilary – do you think he might already know? Let us know what you think in the comments below and don’t forget to check CDL tomorrow for more “The Young and the Restless” spoilers and news.