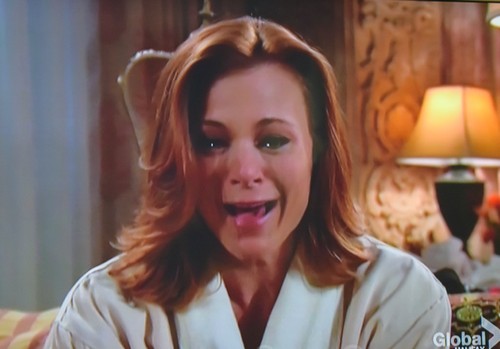 “The Young and the Restless” spoilers for Monday, August 3, tease that Jack (Peter Bergman) will spill the whole story about the doppelganger Victor (Eric Braeden) put in his place. Jack will explain to Phyllis (Gina Tognoni) that the switch happened on their honeymoon and the impostor’s name was Marco Annicelli (Peter Bergman). Phyllis will break down in tears as she realizes she’s been living and sleeping with another man.

Phyllis will want to turn Victor in, but Jack will say they can’t. Jack with discuss how he thinks he killed Kelly (Cady McClain). Phyllis will learn that Jack escaped the cargo ship with Marisa’s (Sofia Pernas) help, but people died in the explosion. Jack will let Phyllis know that they’ll get revenge eventually. Phyllis will pack her bags and vow that Victor is going to pay.

At the park, Marisa will meet with Victor and figure out that he knew Marco’s body was missing. Marisa will think it’s unbelievable that Victor would put everyone in danger, including his own daughter and granddaughter. Victor will reply that he has people tailing them as well as Marisa. When Victor learns that Kevin (Greg Rikaart) and Mariah (Camryn Grimes) went to the cops, he’ll tell Marisa to make sure she keeps quiet about his involvement and not identify for the authorities that Marco is Jack’s double.

Kevin will watch Marisa and Victor talking from nearby before heading to the police station. When he arrives, Kevin will give Detective Harding (Chris McKenna) updates on what he saw. Marisa will pop in and Harding will ask her to draw a picture of Marco. Marisa will sketch someone that resembles the captain of the cargo ship. Kevin will believe something’s not right about the pic. Harding will tell Kevin that he has people looking out for them.

Mariah will give Abby (Melissa Ordway) and Summer (Hunter King) the news that Marco is still out there. Noah (Robert Adamson) will show up and indicate that Marisa was stunned to hear Marco was still alive. They’ll all notice a man watching them from a distance, but Noah will confirm it’s a police officer. Later, Noah will catch up with Marisa and want to know why she was in the park with Victor. Marisa will lie and say Victor wanted her to steer clear of Noah.

Meanwhile, Billy (Burgess Jenkins) will come into The Underground and ask Sage (Kelly Sullivan) where Gabriel (Justin Hartley) is. Chelsea (Melissa Claire Egan) called in to work and said she wouldn’t be there. Billy will figure Gabe might know where Chelsea’s at, but he won’t be around. They’ll strike up a conversation about how Billy still cares about Chelsea and especially Connor (Michael and Nolan Webb). Sage will mention that being a parent isn’t dictated solely by blood. Hmm.

Other “Young and the Restless” spoilers reveal that Ashley (Eileen Davidson) will overhear Victoria (Amelia Heinle) and Nick’s (Joshua Morrow) discussion at Newman-Abbott. Ashley will be concerned that they’re keeping secrets, but Victor will insist that everything is out in the open. Talk will turn to Jack and Ashley will suggest that Victor is holding something over him. Abby will arrive and shout that they should try to resolve their differences. Ashley will make it clear that she doesn’t trust Victor and add that nobody’s perfect. That goes for Stitch (Sean Carrigan), too.

Billy and Victoria will bond as they watch Johnny (Holden and Ryan Hare) play at the park. Back at The Underground, Nick will catch Sage off guard when he books the club for a private party and then says it’s just for the two of them. After some dancing, Nick will drop to one knee and ask Sage to marry him. A shocked Sage will happily accept. Nick and Sage need to enjoy this happiness while they can. Y&R rumors hint that big trouble lies ahead for their relationship. Stick with the CBS soap to see all the turmoil.