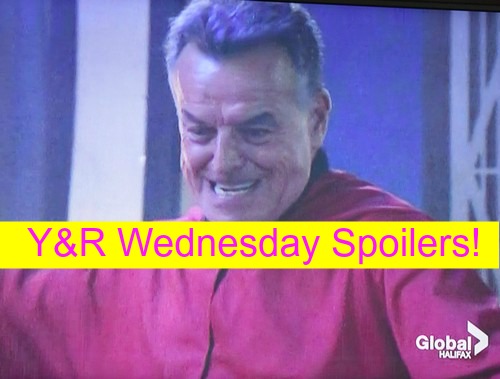 “The Young and the Restless” (Y&R) spoilers for Wednesday, November 4, tease multiple deaths and shock revelations. We see that Victor (Eric Braeden) will try to get Adam (Justin Hartley) out of harm’s way. Victor will ask for Billy’s (Burgess Jenkins) help, but Billy will make it clear that he has no interest in pulling Adam to safety.

It looks like that speech about forgiveness wasn’t so genuine after all. Victor will remind Billy that Adam saved him from a fiery blaze once, but that won’t seem to matter much.

Victor will manage to get Adam up to the ballroom and he’ll urge his son to make a break for it. Billy won’t be pleased when he hears that idea. They’ll all begin to argue, but Adam will say he’s not going to bolt.

Adam plans on facing his punishment, but he’ll refuse to get on the helicopter that’s taking guests away from the party. Later, Adam will see the mysterious partygoer that’s been causing all the trouble. As Adam approaches, the man in the red devil costume will take off his mask and reveal his identity. The devil and person who started the fire is Ian Ward (Ray Wise)!

Meanwhile, Joe (Scott Elrod) will gripe when the helicopter is full, but Abby (Melissa Ordway) will give up her spot. Abby will be on a mission to help Ashley (Eileen Davidson) and Stitch (Sean Carrigan). As Abby searches for them, Ashley will indicate that she’s grateful for the way Stitch treated her daughter. Stitch will confess that he still has feelings for Ashley.

They’ll start to kiss, but a noise will interrupt them. Stitch will realize that it’s a gas line and another explosion will rock the building. Abby will find Stitch and Ashley knocked out in the rubble.

Other “Young and the Restless” spoilers say Patty (Stacy Haiduk) and Phyllis (Gina Tognoni) will have a huge confrontation. Phyllis will accuse Patty of starting the fire, but she’ll deny it. Patty will mention that she’s there to warn Dylan (Steve Burton) about something.

Phyllis and Patty will start arguing over Jack (Peter Bergman). Patty will grab Phyllis’ neck and begin to choke her, but Jack will break up the fight. Jack will pretend he’s in love with Patty, but his words won’t be enough. Patty will lean in for a kiss as proof. That won’t sit well with Phyllis, who will throw a punch Patty’s way.

An explosion will leave Jack and Phyllis unconscious. When they wake up, they’ll discover Patty is dead. Downstairs, they’ll relay the news to Paul (Doug Davidson). Paul will also get updates on the disabled fire alarms and realize that someone deliberately started the fire. At the hospital, the children will all be asleep after their traumatic ordeal. Lily (Christel Khalil) will fear the worst when she learns Cane (Daniel Goddard) still hasn’t made it out.

Chelsea (Melissa Claire Egan) will freak when she finds out that Adam went after her at Newman Enterprises. Michael (Christian LeBlanc) will get an earful for helping Adam escape, but Lauren (Tracy E. Bregman) will stick up for him. Chelsea will eventually apologize to Michael. In the chapel, Nikki (Melody Thomas Scott) will pray that Victor will return to her. Nikki will suggest that Victor has so much to live for.

Nick (Joshua Morrow) and Sage (Kelly Sullivan) will show back up to see Christian, but they’ll be informed that he died while they were gone. This certainly seems like a tragic situation, but Y&R rumors hint that there’s some trickery in play. There’s a good chance that Dr. Anderson is behind this and the baby’s death was faked. Sharon (Sharon Case) will likely end up thinking Christian is her own child. Stay tuned to the CBS soap to see how it all goes down.