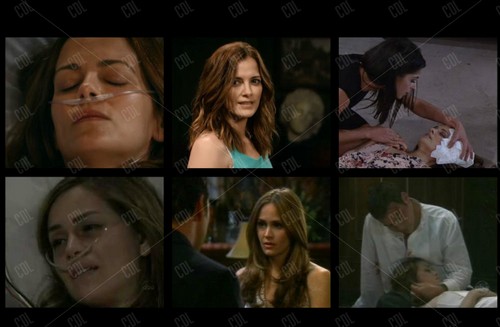 “General Hospital” (GH) spoilers hint that Hayden Barnes‘ (Rebecca Budig) true identity is a major shocker. Tracy Quartermaine (Jane Elliot) is confident that she knows who Hayden truly is – and has dug up a scandal from her past. But is there far more to it? Is Hayden the other evil sibling of Nikolas Cassadine’s (Tyler Christopher) beloved Emily Quartermaine (Natalia Livingston)?

We know Emily had a twin that was given up for adoption – Rebecca Shaw (Natalia Livingston) who came back to Port Charles to stir up trouble and try and scam Nikolas and the Qs out of cash.

But since Nikolas would have recognized Rebecca right away since he was involved with her, Hayden is likely NOT Rebecca – who is also rumored to have died. But since one child was given up for adoption – Rebecca – why not a second in Hayden? Let’s consider…

If Hayden and Emily share familial ties, it would explain Nikolas’ intense attraction to Hayden – and why she’s terrified for Nikolas to learn her secret. You’ll recall that Tracy didn’t threaten Hayden with telling the world about her identity – she threatened to tell Nikolas.

And in the same episode where Tracy let Hayden know she knew her backstory, Jason Morgan (Billy Miller) conjured up Emily’s name from Nikolas’ past and told him that Emily would have been ashamed of the way he’s acting – threatening to send Jason to jail for the balcony incident.

That mention shook Nikolas to the core and then moments later, Hayden showed up and proposed to Nikolas, ostensibly to help protect ELQ. Were the writers giving us a hint? How stunned would Nikolas be if he married Hayden for the corporate scheme and found out he has wed Emily’s darker half?

Here’s what we know – both Hayden and Emily were born in 1984. Hayden’s license was shown on camera at one point and Emily’s age revealed back as a teen. And since Emily is from out of town and was taken in by the Qs after her mother’s death from cancer, there’s plenty of unexplored backstory to make another twin (technically a triplet) plausible.

Plus, the two look shockingly alike when you check them out side by side – as close as many twins in appearance. Also, Emily was gone from Port Charles for a couple of years before she returned with the cancer diagnosis – she could have been with her sister Hayden and have told her all about Port Charles.

When Ric Lansing (Rick Hearst) found Hayden and used her to trick Jake Doe/Jason Morgan (Billy Miller) into thinking she was his wife, it would have been the perfect opportunity for Hayden to come to the town where her sister lost her life and check out the lay of the land.

And then when an opportunity presented itself to cozy up to her dear sister’s love Nikolas, she may not have been able to resist. If Hayden was Emily’s evil sis, she could have been very jealous that Emily was taken in by the wealthy Quartermaines, adopted, and then landed the Cassadine heir.

Of course, Emily lost it all when she was killed by the text message killer – but still, she had advantages Hayden never did. Hayden may have targeted Nikolas out of curiosity or to avenge her sister – so many motives – but then found herself falling for him.

Hayden does seem to have genuine feelings for Nikolas at this point – or is pretending convincingly – but now Tracy has her over a barrel so she has to keep up her evil doings. Plus, if Hayden is Emily’s sister, that ties in a lot of other people into her storyline.

But if Tracy realized that Hayden was Emily’s sister, would she still be pimping her out to Nikolas to get control of ELQ? In a word, yes. Tracy can be ruthless – remember when she has Helena Cassadine (Constance Towers) curse Emily?

Plus, Emily wasn’t blood, even though the Qs took her in and adopted her and grew to love her – Hayden is a stranger despite her possible blood tie to Emily. It would throw off many Port Charles’ residents who dislike Hayden to find out she’s a sibling of Emily whom they all loved.

If Hayden can get Nikolas to marry her – and the truth comes out that she’s Emily’s sister, he would be floored. After all, he still considers Emily the love of his life. This would feel like a sick betrayal to Nikolas.

Then again, Nikolas betrayed Hayden by having her shot. He would also feel sickened that he tried to kill Emily’s sister – on top of the guilt he already feels about that hasty kill-order that, thankfully, went awry allowing Hayden to survive.

And if Hayden is related to Emily, would that give her some sort of rights at ELQ – since she would be a quasi-Quartermaine? If Edward Quartermaine ever gave any ELQ stock to Emily – which he might have since he was fond of her – that could pass to Emily’s only living relative – if Hayden is her sis.

What do you think GH fans, would you like Hayden to be Emily’s other evil twin? If so, does Hayden know about Rebecca? She sure seems interested in sticking around Port Charles and hiding from her complicated past, so could a blood tie to Emily be part of her backstory? Share your thoughts in the comments below.

Come back to CDL often for more “General Hospital” spoilers, news and gossip.