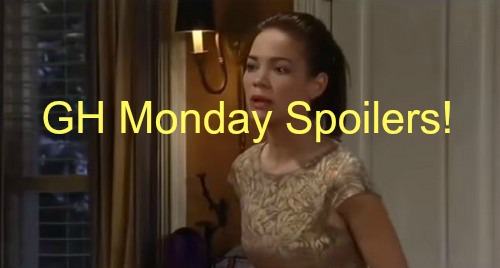 “General Hospital” (GH) spoilers indicate that Sam will soon be hurt by Jason and Liz getting closer – check out these spoilers for the Monday, January 11 episode to see what happens with Liason plus Jake gone rogue, Sonny rages, Hayden schemes and Maxie is ready to call the cops.

Maxie Jones (Kirsten Storms) is a major busybody and she’s ready to butt into Lulu Spencer’s (Emme Rylan) life once again. And by the way, why are Johnny Zacchara (Brandon Barash) and Lulu hanging out in a public space when he’s a wanted man?

Maxie can’t believe her eyes when she sees Johnny’s back in town and with her BFF. Maxie is ready to dial 911 and have Johnny hauled off but Lulu will stop her, but just how much will she tell Maxie about why Johnny is in town?

Will they detail their revenge scheme against Valerie Spencer (Brytni Sarpi)? Maxie does love a good revenge scheme. Maxie will assume Lulu is shagging Johnny and they have to clear that up and then convince her to put down the phone and forget she saw Johnny there.

Liz Webber (Rebecca Herbst) goes into a panic when Jake Spencer (James Nigbor) goes missing and wails to Jason Morgan (Billy Miller) who also flips. Based on the open door and broken photo, they are right to worry.

Plus the last time little Jake wandered out of the house, he got hit by a car, so Liz is spinning out. Jason calms her down, they find Jake, and then he insists that she and the boys need to stay with him until they figure out what’s going on at her house.

Liz doesn’t want to seem needy and pull Jason back in – plus she might worry that he could suspect she’s amping up the drama to lure him back in. But Jason won’t have any of it – he’d rather be safe than sorry and takes her and the kids to the MetroCourt to share his suite for the night.

Across town, Sam Morgan (Kelly Monaco) tells her mom and sister that she thinks she and Jason are rebuilding something together. But her cautious confidence in rediscovering their love will be shattered when she finds Liz in Jason’s hotel room and assumes the worst.

Sonny Corinthos (Maurice Benard) is on a tear over at GH because he thinks his new doctor is dissing Carly Corinthos (Laura Wright) because he wants to see Sonny alone. He fires the guy – but can someone else talk the miffed mobster out of his fit?

Nikolas Cassadine (Tyler Christopher) wants to know why Hayden Barnes (Rebecca Budig) thinks them getting hitched will help him keep ELQ. The sexy schemer will have a whole plan ready to lay out – but he doesn’t know it’s her only way to get the ELQ stock she needs to betray him.

Whatever secret Hayden is hiding must be bad because Tracy Quartermaine (Jane Elliot) has her running scared. Will Nikolas buy into this? Will Hayden seduce him to try and seal the deal? Nikolas will be skeptical but he does love her.

Spencer Cassadine (Nicolas Bechtel) would be thrilled since he likes Hayden but if Nikolas puts a ring on it, Laura Spencer (Genie Francis) will go ballistic. She doesn’t trust Hayden and doesn’t want her anyone near Nik. How will this all play out?

Don’t miss a moment of the Monday, January 11 GH and then come back to CDL for tons more “General Hospital” spoilers and news.