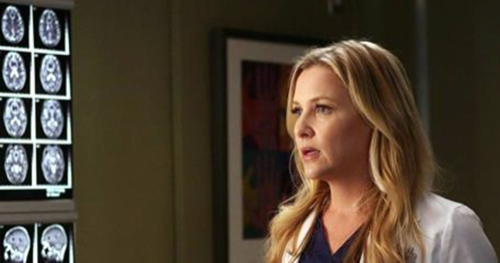 Tonight on ABC Grey’s Anatomy returns with a great all new Thursday April 21, season 12 episode 20 titled “Trigger Happy,” and we have your recap below. On tonight’s episode, a young boy gets shot by mistake, and the doctors desperately try to save his life.

On the last episode, Ben operated on a pregnant woman without the proper equipment while the hospital was on lockdown in the first part of this combined episode. Did you watch the last episode? If you missed it, we have a full and detailed recap right here for you.

On tonight’s episode as per the ABC synopsis, “a young boy gets shot by mistake, and the doctors desperately try to save his life. Meanwhile, Callie attempts to make a decision about Sophia’s future on her own, and this doesn’t sit well with Arizona.”

This episode looks like it is going to be a great episode and you won’t want to miss it, so be sure to tune in for our live coverage of ABC’s “Grey’s Anatomy” Season 12 Episode 20 at 8 PM EST!

Arizona asked Callie to see her on tonight’s episode of “Grey’s Anatomy”. Apparently they’ve been talking about Penny moving to New York and Callie following her out there, but the two appeared to be confused on what would happen next. It seems Callie wants their daughter to come with her to New York and go to school out there. While Arizona wants to know why Callie believes it’s such a forgone conclusion that their daughter would just go with her when she could just as easily stay in Seattle with Arizona.

So it was clear that the two needed to talk to each other to reach an understanding. However, their eventual conversation on neutral ground did nothing for either of them. Callie had gotten upset with Arizona for constantly saying their daughter was hers. And Arizona had wanted to make it clear that there was no way their child was going to be from everything and everyone she knows in order for Callie to be with her girlfriend.

And therefore their little talk got neither of them anywhere. Yet, back at the hospital, one case managed to grab everyone’s attention when an eight-year-old boy was brought in with a gunshot wound. Brandon and his friend Peter had been playing around and unfortunately their baby-sitter had taken her eye off of the kids because she had to leave the room for a minute. So one of them had found a gun in the interim and was able to accidentally shoot the other.

Peter’s mother hadn’t known that there had been a gun in the house. So it looks like she wouldn’t have approved of her son going over to Brandon’s if she had known. But nothing could be changed after the fact and her son Peter needed to be reassured. Peter had accidentally shot his friend so he had wanted the doctors to tell him Brandon wasn’t going to die because of him and so Amelia had assured him that everything was going to be ok.

Yet, Owen told her she shouldn’t have said that. Owen said they shouldn’t make false promises and that Brandon’s surgery could go either way. The little boy had a bullet lodged near his spine so anything could happen. And Owen also added that they didn’t know if Peter was going to end up as a murderer after all.

Elsewhere in the hospital, though, Maggie wasn’t waiting to judge. She had seen the teenage babysitter and had automatically blamed her for what happened to Brandon and Peter. So she had found the young woman alone and had taken it upon herself to ask why she had left the kids alone. She asked if she went back to the car for her charger or if she was just answering a text. And the truth was the girl was making the kids lunch.

The little boys were eight-years-olds and they were playing. So the teenager thought she could leave them alone long enough to make them grill cheese sandwiches. But she hadn’t liked what Maggie was implying and so she had gotten pretty worked up in defending herself. And telling if not yelling at Maggie that none of what happened was her fault.

So Riggs had pulled Maggie out of there before the situation got even worse. However, he had asked her about it later as they were watching Brandon’s surgery and she had told him about an incident she had had with her nephew. Maggie it seems had been watching Meredith’s kids one day when she took her eyes off them for a second and in that second her nephew had dumped flour all over himself. And so Maggie has always wondered what if that had been boiling water instead.

She knew it wasn’t and that her nephew was just fine, but that one moment had frightened her so bad that she didn’t know how to handle it when children were the patients. So she had told Riggs that she’d understand if she didn’t get it. Only Riggs did get it. He told Maggie that he understood and that family has a way of messing you up like that.

Which was something many at Grey Sloan was figuring out for themselves. Arizona had talked things over with Richard and he had told her that she shouldn’t jump the gun by bringing up lawyers when there was a chance she could still work things out with Callie. So Arizona had said that she would calm down and not make the same mistakes as either April or Jackson. But then Callie gave in her notice and so it doesn’t look like Callie was willing to put off moving to New York.

Only Arizona wasn’t the only one that tried to tell her that it wasn’t such a great idea. Bailey had actually been shocked when Callie gave in her notice. She thought it was odd for the Chief of Ortho to give up her job and stall her career in order to chase a resident to New York. And none of the jobs in New York were offering Callie anything as close to what she had at Grey Sloan.

Bailey however was having some trouble understanding a lot of people. Her husband Ben had been put on a six-month suspension from the surgical residency program recently yet Ben managed to find a way around that. He was first an anesthesiologist and so he wanted to return that during his suspension. And that way he doesn’t have to lose out on anytime in the OR.

And so Ben had thought Bailey would be onboard with his decision. Though for some reason she wasn’t. She said that it wouldn’t look good for him to still be able to sit on surgeries in spite of the suspension and then she added that she couldn’t be seen as taking it easy on him. So Ben had gotten upset with her for putting her career before what was best for him and he said he didn’t need her permission yet she told him that if he went on with his plan then he was going to need to find some place to sleep.

So now Ben is looking for a place to sleep because he chose to go back into his original field. Yet, Brandon’s surgery went ahead and it appears that Brandon will live, he just won’t be able to walk ever again. And so Brandon’s situation had made Jo think again about having a gun in the house, therefore she later handed it over to Alex and told him she didn’t need it to feel safe anymore.

But Arizona and Callie have officially declared war when it comes to Sofia so next week they’re going to force their friends to choose between them.