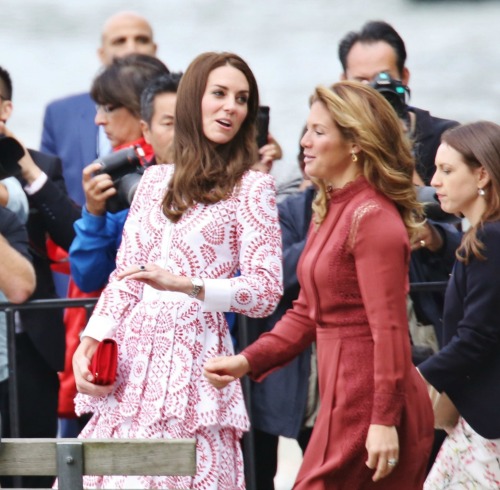 Kate Middleton and Prince William’s Royal visit just may bankrupt Canada since The Duchess of Cambridge demands such special consideration for her children. The Cambridge’s base of operation will be Government House and a special nursery has been built for Prince George and Princess Charlotte to enjoy during the Royal children’s 8-day stay.

The grounds of the Government House have undergone a transformation and are especially child-friendly to satisfy Kate Middleton. Prince George and Princess Charlotte will have the run of the park-like setting that surrounds the grand manor.

Points of interest for George and Charlotte include a totem pole, a fountain in which rubber ducks float and many pathways along which the children can skip. Of course the Duke and Duchess of Cambridge’s nanny Maria Borrallo will be available 24/7 to play with George and Charlotte.

The nursery at the Government House that has been designed for George and Charlotte is filled with all kinds of treats for the youngsters. There are probably lots of expensive toys and stuffed animals with which George and Charlotte can play. No expense should ever be spared when it comes to Kate Middleton and Prince William’s offspring.

Even Prime Minister Justin Trudeau and wife Sophie Trudeau have gone out of their way to ensure that George and Charlotte are well-cared for as Kate Middleton and Prince William fulfil 30 engagements during the Royal Canadian visit.

The Trudeau’s, who have three young children of their own, have reportedly arranged special meal plans for Prince George and Princess Charlotte. Apparently a representative called over to Kate and William’s personal chefs and asked for the recipe for George’s favorite dish – spaghetti Bolognese. No canned macaroni and beef for the Royal children.

Justin Trudeau and Sophie Trudeau will accompany Kate Middleton and Prince William during several stops throughout British Columbia and the Yukon Territory. It sounds as if the Trudeau kids will get some use out of the nursery too.

Of course there has been no mention of how much it has cost Canadian taxpayers who are footing the bill for these renovations.

In case you were wondering, the flower and vegetable gardens at the Government House are maintained by volunteers. Maybe all the extra work to make the park-like setting look extra special didn’t cost much at all.

Maybe the nursery could be turned into a coffee shop or café where visitors can grab a cup of tea and a scone and marvel that the third and fourth in line to the throne once played in those very rooms. Come back to CDL to enjoy all your Royal news and reviews.

We couldn’t have asked for a warmer welcome to Canada from the people of Victoria! #RoyalVisitCanada 🇨🇦 pic.twitter.com/OqSsWX7hcj