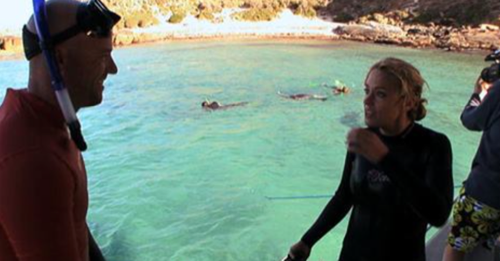 Tonight on TLC Kate Plus 8 returns with an all new Tuesday January 26, season 4 finale called, “Kate’s Advice,” and we have your recap below. On tonight’s episode Kate Gosselin watches her younger self in clips from previous seasons.

On the last episode, Kate went to New York when she got set up on a blind date, which included a fancy dinner and a helicopter ride. Back at home, Mady and Cara found things to do to keep their younger siblings busy. Did you watch the last episode? If you missed it, we have a full and detailed recap right here for you.

On tonight’s episode as per the TLC synopsis, “Kate watches her younger self in clips from previous seasons and discusses her evolution as a mother and a person.”

Tonight’s episode is going to be filled with the usual Kate Plus 8 drama and you won’t want to miss it, so be sure to tune in for our live coverage of the show tonight at 9 PM EST! What kind of drama do you think will unfold in this fourth season of Kate Plus 8? While you’re waiting for tonight’s episode, sound off in the comments below and tell us what your expecting from the Gosselin family in the season 4 finale.

#KatePlus8 tonight has older Kate talking to younger Kate and offering advice as she looks back on past seasons. She says she thought it would be fun to watch old clips and talk about what she would have done differently or what she learned.

Kate says parenting changes you and you live and learn. They start with a clip of Kate freaking out over gum stuck to socks. Kate says she overreacted and wishes she could scoop up baby Joel and kiss him over the gum.

She wonders why their aunt would give all the three year olds gum. Collin cries as she says she’s throwing out the bear with gum on it. She says she didn’t throw it away and it was just a threat. Maddie tried to comfort crying Collin.

Kate says if gum filled clothing was her only issue now, it would be better. Now we see her freaking over a big throw up mess in Joel’s bed. Kate says vomit is all about laundry and fear that it will spread.

She says she was always rinsing vomit and it was endless. She says she’s always wanted a sick room in her house with easy to scrub flooring. She put sick Joel into the laundry room back then but says a sick room is a dream.

We see Aaden peeing on the floor and Kate asking when he’ll use the potty. Kate says girls are easier and boys are messy. She says she lost her patience and every mother did. She says they were close to three and the boys thought it was funny.

Next is Kate talking about one of her original producers and tossed her a dirty diaper and she ran screaming. Kate says she was preparing her for motherhood. Kate says it was horrible of her then laughs.

Next we see Kate letting the kids paint each other with pudding. She says they had to ask for permission first. Kate laughs at Collin bathing in the pudding. Kate says it’s best to contain messes and says she likes to keep it contained.

She says she’d had to adjust her way of thinking about mess. We see Kate overreacting to mess after mess. She says she didn’t know then that mud is a little mess. She says emotional mess is much worse to deal with.

She says the trade off is lots of good family memories. We see them in a store drawing a crowd. Kate says she knows it’s exciting for people sometimes but says it makes you claustrophobic when people crowd around.

Kate says she doesn’t want to deny her kids a normal experience but says it’s next to impossible sometimes. Kate says she did the best she could with the situation. We see her snapping a family pic of the kids with their backpacks on.

Back then, Kate says they always do a front door pic on the first day of school. Kate says it was an emotional day. Kate says it means more than school pictures. She talks about some of her mistakes.

They show Kate looking down from a high tower and she’s ready to walk out on a height in Australia. She’s scared. She bickers with the operator of the attraction and says she wasn’t being mean on purpose, she was just terrified.

Kate says she was mean and feels bad about it. She says she took it out on him and says it still scares her now thinking about it now. We see her arguing with the guy who told her she was wasting their time and taking too long. Kate says she still owes him an apology.

Kate says she would never do that now and we see her being dangled off the building. She says she needs to stay away from tall buildings. Next we see her yelling at the kids about a knob she found. Kate yells at them and tells them to get into PJs.

Kate says she was yelling and she’s not proud of it and says it’s not that loud in real life when she yells. She says it was not as big of a deal as she made it. She says the kids knew it was bad and that’s why they were blaming it on each other. We see Kate grilling the kids on who took the knob off. The boys tell her nobody did it.

Next is Kate and the kids on an RV trip. Her VCR isn’t playing and the microwaves isn’t either and she’s upset. We see the RV guy duct taping the cabinets closed. Kate says her kids still talk about this and how they want to redo the RV trip.

Kate says they must not remember how bad it was at the time. We see the RV broken down and a cop telling them they have to get it off the road. Kate is miserable and upset and we see her trying to hold in her rage.

Kate has to unload the kids and luggage into three SUVs to cart them off so the RV can be towed. Kate says she did get dramatic and have meltdowns. She says she doesn’t do that now because she no longer has the energy.

She says no one could describe how bad it was and says she couldn’t do this at her age. She has BFF with her and they are bickering. Jamie says she will get on a plane and leave and they bicker.

Kate says she needed Jamie to help watch her kids and her own and says they fight and will get over it. Kate says she and Jamie are still best friends and says it was just such a high stress level. She says she likes road trips and seeing the countryside and that trip ruined it.

Next is a birthday party and Kate says she loves seeing their little faces. She says looking back gives her a happy attitude and says you forget you’re growing humans and says it’s the job that matters most.

We see the kids doing an Easter egg hunt and she says she had to limit Collin’s egg count because he grabs everything. We see her taking his basket and rehiding some of them. Kate says they were so cute.

Kate says nothing is fair in their lives and says they always blame her and says there’s never enough and it’s never fast enough and that’s just the way it is. She says that was the year she realized the other kids weren’t kidding when they said Collin got them all.

Kate says after that she gave them a number and they could only get a certain number then says she filled 1000 eggs each year. We see them at meal time and Joel fussing over dessert. Kate says she hates seeing that. Kate says Aaden thinks it’s funny now when he had the tantrum.

Kate says that came across harsh but that was when she taught them they had to eat the good food first. We see Kate yelling at the kids at meal time. Kate says she still follows the rules today about what order they have to eat their food in.

Kate says if you don’t lay down the law, she wouldn’t be teaching them good things. She says she won’t apologize for that but admits she sounds harsh. She says the noise gets to her when she’s talking over a crowd.

Next is Kate wrestling with a garden hose that won’t reach and says running 26 acres alone is making her crazy. We see her ranting about the hose and says she was just learning how to do everything.

She says she realized they were in the house and on the property and she had to get out of her comfort zone. She says her tool collection has grown and she’s much handier. We see her building a chicken coop.

Kate says her last frustration is that she can’t pick up heavy things alone. The kids are talking about how bad their mom is at things when she’s assembling tents for them to go camping. Kate tells the kids they are indoor girls.

Kate says she wants the five year old kids back. Kate says she hopes the boys don’t identify that building is a girl thing. She says she’s trying to involve the boys but doesn’t gender specify on help. She says the girls do jump in more.

Kate says tents still elude her and she should just stay home. We see Kate prepping for a pool party at the party store and grabbing a ton of stuff. It was for the kids seventh birthday party and they were doing their first pool party.

We see Kate at the cake place and she says Marsha should run when she sees her coming and we see Kate ordering elaborate cakes then ordering food because she says she had no time. Then we see Kate worried that rain would ruin their party.

Kate is running around like crazy and says she’s not sure it will all come together. Kate says the kids are a much more capable work force now and says the self-sufficiency helps especially with parties.

She says back then they helped all they could and now they are much more helpful. Kate says she couldn’t imagine that she’d still be sitting there 11 years later and says the process has offered them a lot of experience and provides for her family.