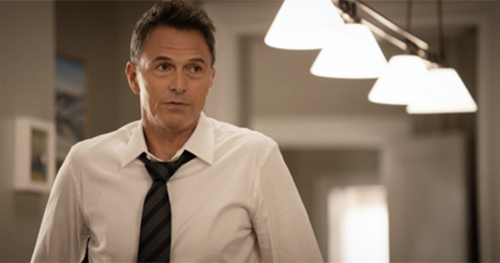 Tonight on CBS Madam Secretary airs with an all new Sunday, November 20, 2016, season 3 episode 7 called, “Tectonic Shift” and we have your Madam Secretary recap below. On tonight’s Madam Secretary episode, as per the CBS synopsis, “Will (Eric Stoltz) faces a big decision, torn between helping earthquake victims in Venezuela and saving his marriage by accepting a job at Walter Reed Medical Center. Meanwhile, Elizabeth (Tea Leoni) works to stop a power grab in the devastated South American country.”

Tonight’s episode of Madam Secretary kicks off with a flashback to 1983 in Charlottesville, Virginia. Elizabeth McCord is just a teenage girl – her younger brother barges into her room while she is studying. Will demands to know if Elizabeth is going to get milkshakes with him and their parents. She whines that she needs to study and doesn’t have time, she tells her family to bring her back a strawberry milkshake.

In the car, Will tells their parents that Elizabeth is a nerd in school and everyone thinks that she is weird. Suddenly, a car comes out of nowhere and runs them off the road – the car flips through the woods. Will his fine – but his parents aren’t so good. He heads back up to the road and cries for someone to stop and help them.

Present Day – Elizabeth is frantically searching through a shoe box of old photos, she’s trying to find a photo of her brother because the last time Will was there he made a crack about her not having any pictures of him in the house. Apparently, Will is coming in to town for an interview, he’s going to take a real job in the states, and try to spend more time with his family rather than working war zones. Henry thinks it is commendable that Will is turning things around, and trying to be there for his daughter.

Will, his wife, and their daughter Annie arrive at the door. Everyone rushes to greet them. They are basically all strangers to 6 year old Annie, they head to the kitchen to get to know each other. Allison takes Annie upstairs to see her room. Elizabeth gets a phone call from the office, there was a level 9 earthquake in Venezuela, and they can’t get a hold of any of the Americans at the Venezuelan embassy – she rushes to the office.

Daisy and Nadine get to work setting up a 1-800 number for worried Americans to call and check in on their loved ones. While Nadine is working, she gets a surprise visit from Arabelle, Secretary Marsh’s wife. Arabelle owns a property in Venezuela, and she has an employee there named Clara Alvarez that was seeing after it. Arabelle can’t get a hold of Clara and she is worried, Nadine promises to look in to it.

Jay pays Elizabeth a visit, he says that the Navy and aid are all ready to ship out but they can’t go unless they have permission from the Venezuelan president. Elizabeth finally gets through to Chuck, one of their guys at the embassy in Venezuela. He says that there are casualties, the president, and vice president are both dead. And, the Venezuelan Constitution doesn’t state who is the next in line of succession. The earthquake wiped out all the political figure heads of Venezuela.

Meanwhile, a plane full of doctors, nurses, and medical supplies arrives in Venezuela from International Aid. Men with guns attack them at the airport, they don’t want to let the in to the country because they think that they are Americans.

Elizabeth and Dalton learn that the doctors from International Aid have been taken prisoner by a gang from the slums of Caracas. And, it gets even crazier, apparently President Suarez had a son, and the gang is working for him, President Suarez’s son says that he is the new President of Venezuela. Now, no one else will send in any more aid because of ow dangerous it is in the country.

Will returns to the McCord House, and Henry is the only one home. He announces that he got the job in DC, Henry can tell that Will isn’t too excited about it. Will doesn’t want to talk about his new job though – he wants to talk about what is going on in Venezuela. Henry gives Will a speech about settling down an spending time with his family, there comes a point when you have done your part and it’s time to do your part at home with your wife and kids.

Elizabeth and Dalton call Suarez Jr. – he agrees to release the aid workers, but only if the US will recognize him as President and make a public statement that it is legitimate. In the mean time, no one else will send any more help in to Venezuela until the country gets their political crisis straightened out.

Elizabeth and Dalton put together a plan – they decide to track down the Venezuelan House of Senate leader, Vela, and encourage him to take on the presidency so that Suarez Jr. can’t. Elizabeth and Dalton sit down with Russell and weigh out the pros and cons. Russell warns them that planting a new President in Venezuela could be disastrous to the campaign, but Dalton refuses to let politics get in the way of saving lives in Venezuela.

Liz heads home and Henry and Will are having some beers. Will informs Elizabeth that he is not taking the job he got in DC because he is taking his medical team to Venezuela. Elizabeth freaks out, she screams at him that he can’t blow off his job and his family and run off again. Somehow their argument takes a dramatic turn and Will and Elizabeth begin arguing over their parents’ car crash years ago, they both died.

Will cries that he couldn’t save their mom because he didn’t know what to do. Liz is taken aback, she had no idea, she thought their parents died instantly in the accident. She didn’t realize that their mom was alive for a few more minutes. Their talk is interrupted by a call from the White House, Elizabeth heads back to work. She tells Will she will be back soon, and orders him not to leave until she is back.

At work they learn that Vela is alive and they found him, but he has a compound leg fracture. Vela has a high fever and is in and out of consciousness. There’s no way that he can declare pregnancy.

Elizabeth and Dalton resort to Plan B. They film a fake news broadcast declaring that Suarez Jr. is the new president. They have the footage played for him on a laptop, there is no internet in Venezuela, so Suarez has no idea that he has been duped, he thinks he is the new president. As promised, he turns the aid workers back over to the Americans.

At the McCord house, Will sits down in the kitchen with his daughter and says goodbye to her, his bags are packed. Annie doesn’t even seem fazed that her dad is leaving again.

The aid workers that were just freed take a trip to Vela and get him patched up. Then he holds a real press conference and declares him self the new President of Venezuela.

Elizabeth heads home and is shocked to see that her brother really left. Sophie and Annie are packing to move back to London. Elizabeth runs out of the house – she tries to catch her brother at the airport before he leaves. When she arrives at the airport, Will’s plane is gone, but he is still there. Apparently, he had a change of heart and decided to stay with his family. Elizabeth is thrilled that he made the right decision. They share a moment and make amends over their parents’ death years ago.