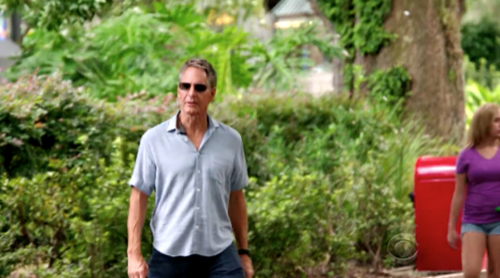 Did you watch the NCIS New Orleans season 3 premiere where the NCIS team partners with several federal agencies to track a sniper who is targeting crowded events in the city? If you missed it, we have a full and detailed NCIS New Orleans recap right here for you.

On tonight’s NCIS New Orleans episode as per the CBS synopsis, “While Pride’s under FBI Investigation he risks further backlash from the bureau after helping former Navy Intelligence Analyst Elvis Bertrand (Tom Arnold), who is the lead suspect in a multiple homicide case.”

Tonight’s episode of NCIS New Orleans kicks off on a yacht in the middle of the ocean – there’s a guy’s poker game going on below deck. Elvis wins the pot, then he heads upstairs to smoke, when he returns, all of his friends have been shot and killed. The gunman emerges and turns his gun on Elvis.

Agent Pride arrives at his office and there is a worker from the DOJ there, Isler wants to discuss Agent Russo working as a double agent. Pride is in some hot water for not reporting the mole sooner. Lasalle interrupts their heated meeting, he tells them that there was a homicide on a ship called the Creole Queen. One of the victims was a Navy officer.

Pride heads to the boat to investigate, he finds Elvis Bertrand’s hat and recognizes him, he has dealt with Elvis in the past. He used to be a cyber warfare analyst for the Navy, now he’s just a hacker and a gambler. They take the bodies back to the morgue so that Loretta and Sebastian can get to work on the case.

Navy officer Warbeck’s cell phone starts ringing in the evidence box. Pride answers the phone – it’s Elvis, and he is still very much alive. Elvis thinks the government is after him, he says he barely escaped a massacre. He won’t talk any more on the phone, he wants Pride to meet him … alone.

Pride heads to a hole in the wall bar to meet up with Elvis. Elvis swears that he is innocent. While they are talking, FBI Agent Gregorio shows up, or course Elvis thinks that Pride double-crossed him. He has a back-up plan though. Elvis pushes a button on his phone and the lights in the bar go out, when they come back on, Elvis is gone.

Pride and Gregorio have a chat – she says that they are investigating the same case. She shows Pride a dead body in Elvis’s trunk. Gregoria reveals that this case has to do with Russo and the Narta Cartel. Apparently, the dead Navy officer that was playing poker with Elvis was handling fiberoptic cables that handled money transactions that handled millions of dollars.

Back at the office, the FBI takes all of the bodies and evidence. They leave behind a keycard that was in Warbeck’s personal effects – it was for a cyber company called Certel. Pride heads to Certel and learns that Warbeck thought that he found a hacker stealing the cyberoptic data. Apparently, warbeck called Elvis for help finding the hacker.

Pride and Hatten hit the streets to try and track down Elvis. Pride manages to track down Elvis on the carousel horses at the park. Elvis tells Pride that the FBI is hanging his out to dry and he is innocent. Then he slips away again.

Elvis says that the man that was in his trunk is the man that killed Warbeck and his friends. Pride heads back to the office and luckily Loretta still has photos of the body. She used his tattoos to ID him, his name is Max Connor, and ironically he had a brother named James that is a tech at Certel.

Meanwhile, Sonja and Lasalle are following agent Gregorio – trying to see if she leads them to Elvis. Gregorio makes them, and she calls back-up to arrest Sonja and Lasalle. Gregorio leaves and meets up with Anne, Warbeck’s partner at Certel. Anne is setting up Elvis, when Elvis arrives to meet Anne – Gregorio tries to arrest them. While they are all arguing, James connor comes flying through on his motorcycle and fires half a dozen shots at them. Luckily, Pride is right behind him ad saves the day – no one is hurt.

Pride and his team join forces with Gregorio and the FBI to track down James Connor. Meanwhile, Isler takes Elvis in for questioning. He insists that he is innocent and he can prove who the hacker is and the person behind the murders – they just need to give him access to Certel’s network. Isler wants to lock Elvis up and charge him, but Pride is trying to convince him to give Elvis a chance.

Isler gives in, they take Elvis to Certel and Anne lets him in and sneaks him in to her office to get on the computer. Max Connor arrives with a gun and the agents take him out. Pride checks Max’s phone and realizes that Anne is his accomplice. Elvis figures it out too – he rushes in to the office and finds Elvis holding Anne at gunpoint. He wants to make her pay for what she did and Warbeck’s death. Pride manages to get Elvis to hand over his gun, and Anne is arrested and taken in to custody.

Back at the office, Pride gloats to Isler – Isler reveals that the investigation in to Russo is closed. But, he’s sticking around New Orleans until they are certain that the cartel is gone.