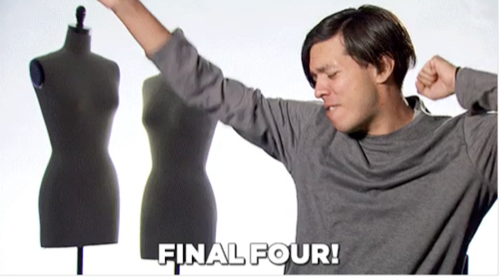 Tonight on Lifetime their Emmy Award nominated series Project Runway airs with an all-new Thursday, December 15, 2016, episode and we have your Project Runway recap below!  On tonight’s Project Runway season 15 episode 13 “Finale Part 1,” as per the Lifetime synopsis, “In Part 1 of the two-part Season 15 finale, Tim Gunn visits the designers at home, but not all of their creations impress him. The clothiers return to New York and try to wow the judges with three pieces from their collection. Guest judge: Michael Kors.”

Tonight’s episode of Project Runway kicks off with Heidi Klum sending the final four contestants home to get to work on their finale collections. Laurence, Erin, Roberi, and Rik will have 6 weeks to put together a complete collection that will debut at New York Fashion Week.

Tim Gunn pays Laurence a visit first at her work space in Los Angeles, California. Laurence explains to Tim that her collection will tell the story of her life, the designs will start out dark and transition to light

Laurence opens up to Tim about how she was a teen mom, she got pregnant when she was 16 years old, and her family was ashamed and cut her off. Laurence didn’t talk to her dad for years, she gets choked up and cries as she explained that her dad got sick and passed away.

Laurence walks Tim Gun through her collection – it starts with army green and then goes lighter and lighter. She has decided she does not want a shred of black in her collection. When the collection is done, all together there will be 7 looks. The over all message is that “there is always light at the end of the tunnel.”

Tim Gunn is feeling optimistic about Laurence’s collection. When they are done looking at the designs, Tim gets to meet Laurence’s son Marley and hang out with her daughter Victoria.
Tim Gunn’s next stop in Los Angeles is to check in on Rik, he meets him at a bowling alley with his family. Tim chats with Rik’s mom Delia about Rik’s decision to become a fashion designer. He actually isn’t the first designer in his family, and his Aunts are helping him out with some embroidery on his collection.

After spending the afternoon bowling, Rik takes Tim Gunn to his workshop to show him the collection that he has been working on. It contains some interesting embroidered denim, optical allusions, and some wild prints. Tim Gunn is nervous about Rik’s collection, it’s not cohesive, he says that he “fundamentally doesn’t understand” how Rik thinks any of those designs go together.

Rik is freaking out, he doesn’t have enough time to rework the entire collection and Tim Gunn has made it pretty clear that what he has done is not going to work.

Tim Gunn travels to Boston to visit Erin next. He is shocked when he arrives and learns that Erin hasn’t finished a single garment. The fashion show is in 10 days, and Erin still has to put together 10 whole outfits.

Erin shows Tim Gunn her drawings that she has of the collection. One of the looks has handpainted designs, another garment has fisherman’s flyhooks connected to it, and Erin has spent more of her time cutting out sequins for her outfits. Interestingly, Tim Gunn is excited about the crazy looks that she is putting together, but he’s worried that she won’t have enough time to finish them all.

After looking at Erin’s collection, she takes Tim Gunn out to lunch to hang out with her mom and some of her friends, and meet her mentor.

For Tim Gunn’s final stop – he travels back to New York City to meet up with Roberi. Tim and Roberi grab some coffees and go for a stroll in the park. Roberi opens up to Tim about his hometown in Venezuela, he came to the United States because there wasn’t enough opportunities and it was a dangerous place to live. Roberi sacrificed everything move to the United States and pursue his dreams. Roberi and Tim head back to his workplace so that he can show Tim the designs that he has been working on.

Roberi and Tim head back to his workplace so that he can show Tim the designs that he has been working on. Roberi is mixing a ton of different fabrics and designs. Tim warns him that the collection is not cohesive and don’t connect to each other. Roberi doesn’t agree with Tim’s critique, he’s happy with what he has been making, he wants his collection at NYFW to be different.

Time is winding down until New York Fashion Week, with just a few days left, the designers all head back to New York City with their collections to finish working in the Project Runway work room. Tim Gunn arrives and explains that tomorrow the final four designers will be previewing three of their looks to Heidi Klum and the judges, and they will each have to create their own logo to represent their collections.

The designers get to work picking out their three looks for the judges. Tim Gunn isn’t impressed when he learns that Roberi didn’t take any of his advice, and he stuck to his original collection. Meanwhile, Erin is sewing frantically, she is nowhere near done with her collection and time is of the essence. Rik and Laurence get to work on their logos.

The next day, the designers spend the morning rushing around and picking out their models’ hair and make-up. Then they head down to the runway for the mini fashion show, they will each be showing the judges three looks from their final collections. This week, Heidi, Nina, and Zac are joined by special guest judge Michael Kors.

After the runway show, the designers line up to hear what the judges thought of their final collections.

Rik is up first, he explains that his designs were inspired by the 1960’s. Zac thinks that Rik needs to “raise the octane,” and amp up his looks a bit. Heidi is worried because the collection doesn’t seem to be cohesive – she is scared that the designs don’t go well together. Michael Kors is a fan of Rik’s leather dress, but he wants Rik to think of ways to make the collection come together. Nina hates the models’ accessories she thinks their glasses and purse are hideous.

Erin gets some pretty tough critiques from the judges as well. They tell her that she should scrap one look entirely. Heidi is thrilled that Erin is using unconventional materials though, and Nina wants Erin to make sure that all of her designs are sparkly to make the collection cohesive.

Interestingly, Laurence doesn’t receive the rave reviews that she usually does. Michael Kors mocks Laurence’s green jumpsuit and says that it looks like something that Heidi would wear at the Beer Yard in Germany. Zac says that Laurence is by far one of the best taylors to ever compete on Project Runway, but she needs to make sure her outfits some how go together when the models walk the runway.

Tim Gunn has been harping Roberi about making his collection more cohesive for days. In a bizarre twist, the judges think that Roberi’s collection is the most cohesive one that they saw today. But, no one is really feeling Roberi’s My Little Pony/Grunge combo. Zac advises Roberi to “juice up his designs” before Fashion Week.

Tonight’s episode of Project Runway ends with Heidi Klum giving the final four some final words of encouragement before Fashion Week, then they rush off to the work room to put finishing touches on their collections.