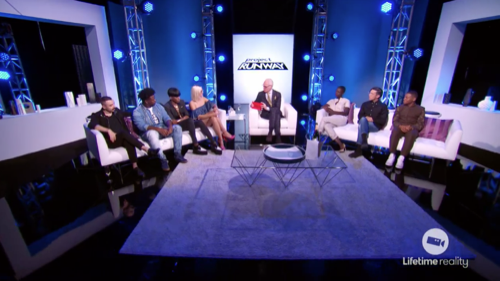 Tonight on Lifetime their Emmy Award nominated series Project Runway airs with an all-new Thursday, December 29, 2016, episode and we have your Project Runway recap below!  On tonight’s Project Runway season 15 episode 15 “Reunion,” as per the Lifetime synopsis, “The designers reunite to discuss Season 15’s highs, woes and memorable moments while also settling some scores and resolving unfinished business. Tim Gunn hosts.”

It’s time for the Season 15 Project Runway reunion special! The party kicks off at the Fashion Institute with Tim Gunn, the final seven designers join him on stage, including Season 15 winner Erin Robertson. Tim kicks the night off with a video montage of Erin’s designs on this season.

Tim Gunn jokes that Erin has a crazy obsession with the color yellow, and that is certainly an understatement if you saw any of her whacky dresses. Erin explains that she likes the color yellow because it makes her designs “pop” and gave the judges a surprise when her dresses walked down the runway. It’s clear she is all about shock value.

Season 15 runner-up Roberi has been doing well since the New York Fashion Show He stayed in NY and landed an amazing job working at a fashion studio. Laurence’s business has been humming since her stint on the show too, she actually is in talks with a luxury car company for a major design deal.

It’s great to hear how well everyone is doing – but it’s time to get down to the juicy drama. Tim Gunn shares a controversial clip from their team episode, there was some major drama between Cornelius, Dexter, and Erin. After the contest, Dexter and Erin threw Cornelius under the bus and Tim saved him and brought him back to the competition.

Erin and Dexter point out that the show edited the footage to make it seem like they were bullies and they didn’t do their fair share of work. Erin is not impressed with the comments that Cornelius was making behind their backs, and she’s offended that Tim Gunn called her a “Mean Girl.”

Mah-Jing jumps to Cornelius’ defense – he thinks that Erin and Dexter were definitely ganging up on Cornelius. And, he knows how it feels because he was the outsider on his team this season.

Mah-Jing was paired up with Nathalia and Jenny on his team. Tim Gunn shares a few clips of them working together during Season 15, and it’s clear that there was some tension between them.

Mah-Jing snaps at Nathalia and wants to know why she was talking behind his back and why she “came at him.” Nathalia jumps on the defense and argues that Mah-Jing has been rude to her since day one and he has never liked her. It’s obvious they have no interest in making amends, they agree to disagree.

Brik’s time on Project runway was cut pretty short, but he definitely kept things interesting when he was still in the game, just like Tasha. Before the commercial break, Tim Gunn shares some hilarious video clips of Tasha and Brik in the work room, and you can’t help but laugh!

Alex’s exit was one of the most heartbreaking of the season – his team lost a competition and he took one for the team and told the judges that it was his pitch that made them lose and he should go home. Alex certainly took one for the team, Nathalia praises him for sacrificing himself for the rest of the team.

Of course, it wouldn’t be a Season 15 reunion show if we didn’t discuss the one thing on everyone’s mind – Jenni’s horrific laugh. Brik describes it best, he says when she laughs it sounds like someone punched a donkey. The designers all take turns on stage trying to impersonate Jenni’s laugh. It sounds like a quartet of hacksaws.

Season 15 was certainly an emotional season, and it seems like a single episode didn’t go by without someone crying. The one person who didn’t shed any tears was Ice Queen Laurence. Of course, in the finale, we saw Laurence finally open up during her home visit. Laurence explains on the stage that she worked hard to block out her emotions and the fact that she missed her kids so that she could focus on the competition.

After the show aired, the designers were shocked to see what some of their co-stars were saying about them in the interview room behind closed doors. Dexter and Erin begin complaining that everyone on the show was fake and abrasive. Cornelius snarks that they were the most fake designers in the work room, it’s ironic that they are calling everyone else fake. Things get heated between Dexter and Cornelius…again, so Tim Gunn changes the subject and shares a few comical questions from the audience.

Tonight’s episode of the Project Runway reunion special ends with a hilarious collection of video footage called “Tim-isms.” Tim Gunn certainly has a clever way of wording things. And, it’s a great laugh!