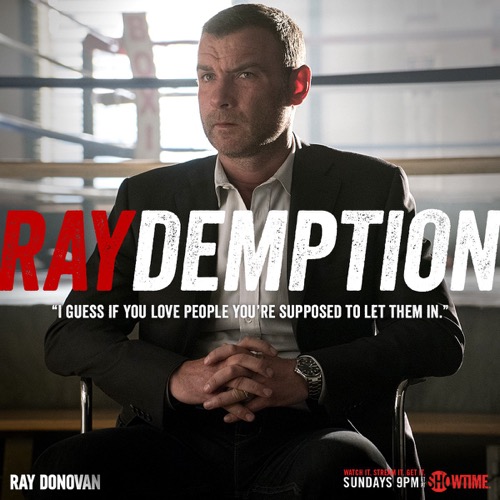 Tonight on Showtime the highly entertaining show Ray Donovan returns with an all new Sunday, July 3, season 4 episode 2 called “Marisol” and we have your weekly Ray Donovan recap below. On tonight’s episode, Ray (Liev Schreiber) helps Hector handle a person from his past who threatens to reveal a secret that could ruin Hector’s boxing career.

On the last episode Season 4 began with Ray in recovery mode in the aftermath of the shootout and trying to reconnect with his family and repair his relationship with Bridget. Did you watch the last episode? If you missed it, we have a full and detailed Ray Donovan recap, right here for you.

On tonight’s episode as per the Showtime synopsis, “Ray helps Hector handle a person from his past who threatens to reveal a secret that could ruin Hector’s boxing career. Meanwhile, Abby offers Bunchy a lesson in marital compromise; and Det. Muncie uses incriminating evidence against the Donovans to force Ray’s hand, which draws him further into the path of the Russian mob.”

Tonight’s episode of Ray Donovan kicks off with Marisol in the bathroom smoking at a TV studio – she is getting ready to take the stage for a live interview about her brother, Hector Campos. The commercial teases that she is going to make some “shocking revelations.”

Ray arrives at Hector’s house – which is surrounded by paparazzi. Hector tells Ray that he needs him to kill the live interview. Ray refuses, Hector throws some cash at him, but Ray says that he still can’t help him. He doesn’t want to get caught up in the mess anymore, he already fell off the wagon trying to help Hector. Hector cries and says that he never meant to start having sex with his sister, but after he was molested by the pastor, he wanted to prove that he wasn’t gay. Apparently, Hector’s story moved Ray Donovan. At the last

Apparently, Hector’s story moved Ray Donovan. At the last minute, Ray sends his hench woman/assistant into the studio to get Marisol. When Marisol realizes that they aren’t with the TV station, she makes a run for it in a back staircase. They wind up tasering her and knocking her out and carrying her out of the building.

Meanwhile, Mickey is out of the hospital and in police custody. Muncie handcuffs him to a chair in her office and brings him a sandwich. Mickey tries to make small talk about Muncie’s daughter, she reveals that she passed away, and that’s something that Mickey can relate to.

Ray brings Marisol to the stadium where Hector is preparing for his next big fight. Hector won’t speak to Marisol. His managers threaten her and tell her that she is going to check into rehab and keep her mouth shut, and they will pay her $25,000 a month. Marisol is not happy, Hector tells her to “f*ck off” and leaves.

Brandon is trying to get dressed to go open the club. His girlfriend is not happy because they haven’t been having sex. He pushes her off from him and she shouts that he needs to “figure this sh*t out.”

Ray gets stuck with Marisol, she won’t go to rehab. In the car Marisol taunts Ray and tells him all about having sex with her father and her brother. He dumps Marisol on Lena and tells her to “sit on her” and don’t let her have any drugs. Ray gets a phone call and learns that Mickey is at Muncie’s office.

Abby and Terry are outside of the fight club and someone snatches Abby’s purse. Terry tries to play the hero and chases after the guy, they get into a fight and Terry loses and he gets away with the purse. Abby calls the police and files a police report, they tell her that the odds of them getting her purse back are slim.

Ray heads to the police station to talk to Muncie. Muncie taunts Ray and says that his dad is going to roll over on him and rat him out. Ray tells Muncie that he needs one day, and he will deliver her Belikov. Ray is on a mission – he tracks down Javi and tells him he wants the guns from the Menassi shoot-out. At his office, Father Romero is waiting for Ray. He knew that he abducted Marisol and is holding her against her will – he tells Ray that he needs to come to confession ASAP. Romero lectures Ray about forgiveness, and he says that he needs to help Hector forgive Marisol.

Ray heads to his car and calls Hector, he tells him about his chat with Romero. Hector scoffs that he has forgiven Marisol and he loves her, but they need to make sure she doesn’t go on TV and destroy his career. Hector doesn’t want Ray to let Marisol go.

Ray tracks down Belikov at a steam room and kidnaps him. After some arguing, Javi finally brings the guns from the Menassi shooting. Belikov is tied up to a chair and knocked out. Ray takes the guns from Javi and smears Belikov’s fingerprints all over the guns. Then, he calls Muncie and sets up a meeting place.

While Ray is driving, Abby calls him, she is reminiscing about a romantic trip they took years ago. She wants to go back just the two of them. He tells her as soon as work dies down, she knows that it will probably not happen. Abby hangs up and Brandon is pacing around the office. He tells her about his and his girlfriends’ little problem – he rants that she wants sex all the time. Abby laughs and tells him that having sex isn’t going to hurt the baby. But, that’s not the problem. Abby takes him to a sex toy shop to buy his girlfriend a dildo. Abby sees a photo of a woman’s boobs and stops for a moment – she still hasn’t told anyone about her breast cancer.

Ray meets up with Muncie at Belikov’s office. He’s still unconscious, Ray tells her the guns are in the ceiling. Muncie gives Ray the keys to Mickey’s handcuffs and he heads outside and gets his dad out of the car. Mickey tries to thank Ray for springing him, Ray scoffs that he only did it so that Mickey didn’t rat him out.

Ray takes Mickey to the bus station and buys him a ticket out of town. Mickey tries to get Ray to come back with him to Prim to rob the casino, but Ray isn’t interested. Mickey talks about his daughter and how much he misses her, then he swears that he was never going to rat him out – they’re family.

Terry is walking down the street and he spots a girl carrying Abby’s purse – he grabs her and drags her in to the fight club. Terry screams at her and threatens to kick her ass if she doesn’t hand over the rest of her stuff. The girl finally caves when Terry threatens to call the police back, and she calls the guy that stole the purse. He brings all of Terry’s stuff back. Before the kid leaves, Terry gives him his ticket to the Hector fight – he tells him he might have a future as a boxer.

Ray heads back to the safe house where Lena and Marisol are hiding out. He wrote a statement for Marisol and tells her to read it. Marisol goes on live television and says she has a drug problem and that everything she said about her brother was lies – she just was upset because he threatened to cut her off.

As soon as they leave the TV station, Ray gives Marisol her purse so that she can get high in the car.
While Ray is driving down the street, Marisol jumps out of his moving car and makes a run for it down a nearby alley. She runs off into the night and Ray loses her. It looks like she won’t be going to rehab.
Ray heads back to the gym and tells Hector that he lost his sister, right before he heads out in the ring for his big fight. Hector is a mess, apparently, Marisol has been texting him and threatening to kill herself. Meanwhile, Ray’s family is up in the skybox, and the kid that stole Terry’s purse is sitting with them. Even Bridget came along.

Ray runs into Father Romero at the fight in the VIP section. Romero is still not happy, he thinks Ray screwed up by forcing Marisol to lie. He reminds Ray that God saved his life, and now he is turning his back on him. Romero says that if “Ray can’t see the trail of broken souls he has left, then he can’t help him” and then he stomps off.

Meanwhile in the boxing ring, Hector is not doing well, Ray watches as Hector gets knocked out and falls on the floor and loses the fight.