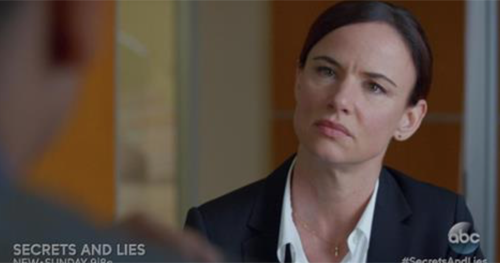 Tonight on ABC their explosive hit drama Secrets and Lies premieres with an all-new Sunday, October 16, 2016, season 2, episode 4 called, “The Detective,” and we have your Secrets and Lies episode below for you.  On tonight episode of Secrets and Lies Eric (Michael Ealy) and Danny (Kenny Johnson) have company in their search for Liam and a devastating betrayal rocks Eric’s world.

Did you watch last week’s Secrets and Lies episode 3 where Eric attempted to track down Kate’s (Jordana Brewster) missing assistant, Liam, (Graham Phillips) only to find out that he is not at all who he said he was? If you missed it we have a full and detailed Secrets and Lies recap of the last episode, right here!

On tonight’s Secrets and Lies episode as per the ABC synopsis, “Eric (Michael Ealy) discovers that he and Danny (Kenny Johnson) have more in common than he first believed. The two get closer to finding Liam, (Graham Phillips) but they aren’t the only ones who have been hot on his trail. At work, things begin to unravel when Patrick fails to cover for Eric at a big meeting and then gets swept up in Detective Cornell’s *Juliette Lewis) web of interrogation.”

Liam apparently had a girlfriend. The girlfriend was young, she was cute, and had even lived nearby. So that’s probably why Liam had called her on the night Kate died and why she had given Liam a ride when he was carrying out boxes that held pertinent information.

But unfortunately Eric hadn’t been the only one that had found out about the girlfriend. The guy that had been basically threatened his life as a well as a friend of his had made a new appearance when Eric had found him threatening the girlfriend at her house.

So there were a bunch of choices that Eric could have made. He could have called the cops or at least help Liam’s girlfriend get away from a crazy man yet Eric chose to let Danny (that’s his name) to continue threatening the young woman because they had both wanted the same thing.

They had both wanted to find Liam and possibly hurt him on top of that. However, Eric needed to know how Danny knew his wife so he questioned him as a way to finally get answers. And he ended up hearing how Danny had also lost someone.

Danny had lost his daughter. His daughter Rachel was eighteen and she had come to town to see a friend however no one had seen her since she had been pictured with Carlie and it has been seven weeks. So Danny was getting desperate and that’s why he didn’t have a problem with technically holding Liam’s girlfriend against her will.

Yet, Eric eventually had a problem with it and so he had the young woman get away and later he had helped Danny find Liam. Eric it seems had remembered that Liam liked this DJ called Carnage so he took Danny to where Carnage was playing.

Though Eric wasn’t the only one with that idea because the police had also found out that Liam liked Carnage. So Detective Cornell had beaten both Eric and Danny to the club and she had also arrested Liam before Eric could even get the chance to talk to the young man yet Danny had an idea that he thought could help.

Danny had later taken Eric to a bondsman to find out what Liam was being held on and seeing as the charges proved to be potentially serious – Danny had asked Eric to pay for Liam’s bond.

Danny had said that way they could both question Liam about what they wanted to know. Yet, Eric went on to spend ten grand for a hunting expedition that didn’t have immediate answers. Liam was still being held by the police and so both men had to carry on with their days until Liam was finally released.

So they had split ways. Danny chose to do what he normally does and Eric tried to stay on top of business. Eric and the company were supposed to be involved with buying someone out and so Eric had asked for his brother’s help because he didn’t think that he could do it alone.

Eric had been worried that he lost his touch since Kate pass away. So he had actually reached out to his brother for support if nothing else and unfortunately Patrick had let him down. Patrick was considered to be the wastrel brother and he liked to live up to that moniker most of the time.

Like when he would sometimes get sloppily drunk. However, Liam had remembered one of those times and had even told Cornell about it. Liam had told the detective that he had overheard Patrick threaten Kate on the night she died.

So Kate had told the bartender that Patrick wasn’t allowed anything else to drink and so Patrick had gone to give Liam his alibi. Patrick had asked Liam to fill up his flask at the liquor store so that’s where Liam was when Kate died. And when Liam was freed from police custody, Danny had picked him up and had thrown him into the back of his trunk of his car.

Danny had wanted answers and he didn’t want to wait. So he had quickly picked up Eric as well and together they had brought Liam to a motel where they could question him together. However, Eric had gotten the first chance at questioning Liam so Eric had gotten everything off his chest.

Instead Kate had given him his job because she had gotten a second chance and had wanted to give Liam one as well. So Liam had gone through the motions and then they had just squandered that chance away. Yet, he said that Kate had bigger things to worry about than just him.

Liam had told the guys that Kate had been investigating Eric’s friend Neil and that she had something incriminating on him. That she allegedly put into her desk only Eric had looked there and he hadn’t found anything.

So that’s when Danny’s turn came up. Danny had asked Liam about Carly and about his daughter yet Liam had said that both women had been guests of Neil’s and that he hadn’t known them personally. And so Danny and Eric had set up a trap for Neil and had demanded that he answer them.

Therefore, Neil told them everything he could. Neil said that Carly had been a call girl and that he hadn’t wanted to get into trouble by telling anyone that he had invited her or that he had sex with her in the company’s garage.

And the guys would have asked Neil some more questions, but Cornell had knocked on their door and had been let in by Danny who apparently knew her. So Eric found out a few things. He found out that Danny was a cop and that he must have worked with Cornell once before.