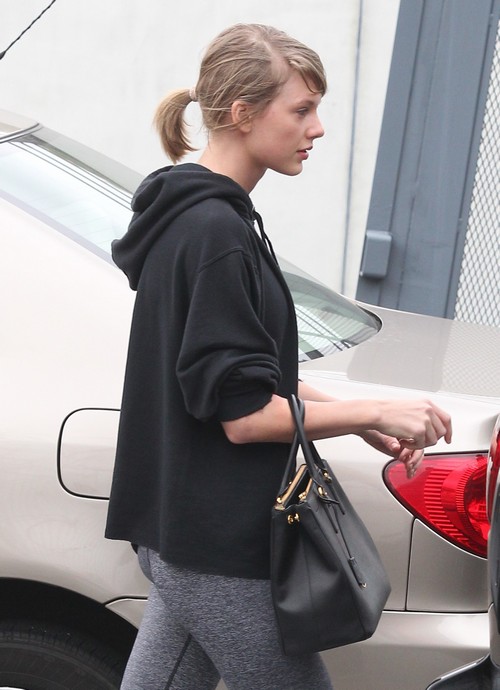 Wouldn’t Taylor Swift love to be as curvy as the gals – like Selena Gomez – in the Swift Squad? Is Taylor desperate to get the perfect body after Calvin Harris reportedly demanded T-Swift add some bounce to that booty or the work-out fiend will call it quits with the “Shake it Off” singer?

Apparently Calvin would take up residency at the gym if that were allowed. Harris reportedly likes his women toned and bootylicious an insider recently divulged to National Enquirer. It may take a lot effort to get for Taylor to achieve a well-rounded backside bump on her stick thin figure.

The source says that so far Taylor is really into the intensive training routine. T-Swift has discussed “getting a decent booty for a long time” according to the insider. In the past Taylor Swift hasn’t been all that into exercising – allegedly Taylor just hasn’t been able to get motivated enough.

We wonder if Taylor might be determined to look voluptuous in a wedding gown. There has certainly been a lot of talk about the possibility that Swift and Harris are talking marriage.

Taylor’s romance with Calvin is the longest one T-Swift has managed to maintain. Usually the guys Taylor dates are ushered out the door after about three months. As previously reported, Taylor Swift has declared that Calvin Harris is “the one” – and Calvin believes Taylor is the love of his life.

When it comes time for T-Swift to choose bridesmaids we’re guessing Selena Gomez would probably be asked. That’s if Taylor hasn’t kicked SelGo out of the Swift Squad. The bride’s body cannot be upstaged by the bridesmaids’!

How much booty does Calvin want Taylor to have? If Taylor Swift can’t get a beautiful behind, one that meets Calvin Harris’s standards, will America’s Sweetheart become a single lady once again?

Singers Taylor Swift and Selena Gomez were spotted at the gym in West Hollywood, California on January 18, 2016. Taylor appears to be going make up free for her workout. FameFlynet