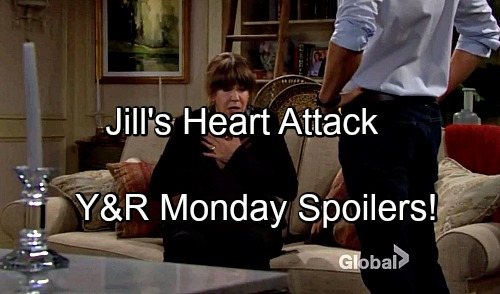 The Young and the Restless (Y&R) spoilers for Monday, September 12, tease that Abby (Melissa Ordway) will have to break some tough news to Stitch (Sean Carrigan). It looks like Stitch believes things are finally settling down. He’s ready for another baby, but Abby doesn’t think that’s the best idea.
Abby will insist that Stitch doesn’t see the same relationship she sees.

Stitch is acting like they’re moving in the right direction, but Abby isn’t sure about that. The Young and the Restless spoilers say Abby will want to hold off on having any kids. She won’t believe it’s wise to bring a child into this world when their marriage is so shaky.

Stitch may be blindsided by Abby’s revelation, but he’ll just have to accept it. These two will need to put some real work into this if they want a future together. If something doesn’t change, it’s hard to believe Stitch and Abby will be a couple for very long.

Related: Are You Disgusted By Billy & Phyllis – Cheaters and Hypocrites? VOTE in Our CDL POLL!

Meanwhile, Dylan (Steve Burton) will try to get to the bottom of Sharon’s (Sharon Case) concerns. He just won’t get why Sharon is so fearful of Victor (Eric Braeden). Dylan will wonder if there’s a deeper issue here. He’ll urge Sharon to tell him if there’s something she’s afraid of.

Sharon will look nervous as Dylan presses her to come clean. Dylan will suggest that they can handle whatever it is. All Sharon has to do is talk to him. Of course, Dylan probably wouldn’t be so understanding if he knew Sully wasn’t even their baby!

Sharon realizes this secret could destroy their lives and she doesn’t want Victor to start sniffing around. To be fair, Victor is a threat to anyone and everyone. Even if there was no dirt to find, Sharon would have every right to be terrified.

Dylan doesn’t think Victor will be a problem, but that’s not much comfort to Sharon. She believes Victor managed to get his own son blown up. Sharon is undoubtedly imagining all of the awful scenarios Dylan could land in.

Nevertheless, Sharon might try to take Mariah’s (Camryn Grimes) advice and just cool it. She’s going to expose the truth herself if she doesn’t keep her nerves under control. Unfortunately, there’s a good chance Sharon is going be right about this situation. Y&R spoilers say Dylan may be walking straight into danger.

Speaking of danger, Jill’s (Jess Walton) life could be at stake over at the Chancellor mansion. Billy (Jason Thompson) just got in a huge fight with his mother and it could have disastrous consequences. Monday’s Young and the Restless preview video shows Jill clutching her chest in pain.

As Jill tries to catch her breath, Billy will scoff at her efforts to gain his sympathy. However, it’s possible that Jill isn’t faking after all. She’s been stressed to the max over Billy’s love life lately. No one would be surprised if Jill was having a heart attack.

Then again, Jill always has a few tricks up her sleeve. Regardless, it sounds like they’ll face a crisis. We’ll give you updates as more details emerge. Stay tuned to Y&R and don’t forget to check CDL often for the latest Young and the Restless spoilers, updates and news.