‘The Young and the Restless’ Spoilers: Luca Becomes Newman Target, Family Plots to Expose Him – Will Summer Stand by Her Man?

BY Heather Hughes on August 5, 2016 | Comments: one comment
Related : Soap Opera, Spoiler, Television, The Young and the Restless 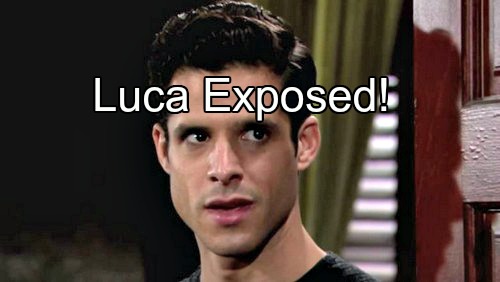 The Young and the Restless (Y&R) spoilers tease that Summer (Hunter King) will make plans for the future. It sounds like Summer will waste no time in preparing for her upcoming wedding. Summer’s pregnancy scare made Luca (Miles Gaston Villanueva) realize that he wanted to settle down right away.

Luca definitely sees himself starting a family with Summer and building a life together. Of course, Nick (Joshua Morrow) and Phyllis (Gina Tognoni) aren’t on board with Luca being in Summer’s life. They feel like Summer dodged a bullet since she isn’t expecting Luca’s baby. Now they just have to find a way to get Luca out of the picture.

Nick intends on seeking out anything Luca has swept under the rug. Phyllis will do her part to pull Summer away from the shady Santori as well. She may even end up working with Victor (Eric Braeden) in some capacity. Phyllis hates Victor more than anything, but she’s willing to make sacrifices for Summer’s sake.

Victor is already hard at work to bring Luca down. He has someone investigating Luca’s possible involvement in the oil crisis and he plans on keeping Summer close through her job at Newman. Victor is trying to keep all of his bases covered.

Once the engagement news reaches Victor, you can bet that he’ll increase his efforts to expose Luca’s secrets. The Young and the Restless spoilers suggest that Victor will do whatever it takes to keep his granddaughter from marrying someone he despises. Victor’s family is his top priority (or so he says).

However, there’s a chance that Luca will come up clean in the oil fiasco. What happens then? Victor would certainly have no problem fabricating evidence against Summer’s fiancé. Summer might dump Luca if she thought his schemes went that far.

Later, Summer could discover that Victor was the one doing the scheming. She’d be furious if Victor made her believe Luca was anything less than the noble man she now believes him to be. It would be nice to see Summer stop defending Victor for a change.

We know Hunter King has dropped to recurring on Y&R. She’s been upgraded to a series regular on Life in Pieces, so we should be seeing less of Summer soon. If Summer gets updates on the plots against her husband-to-be, she might find herself in her own Luca bubble.

Summer could distance herself from her family since they’re so firmly against her relationship. She could be busy stewing off screen. Then again, maybe Luca really was behind the oil spills. Victor could dig up more dirt, too. Who knows what else Luca is hiding?

Summer might call off the engagement and spend some time reflecting on how easily she gets duped. This might be the Young and the Restless storyline that actually makes Summer become a little less gullible. Nah! Who are we kidding? Summer will probably never lose that character trait.

Regardless, more drama is headed in Summer’s direction. We’ll keep you posted as things play out. Stay tuned to Y&R and don’t forget to check CDL often for the latest Young and the Restless spoilers, updates and news.