BY Heather Hughes on May 25, 2016 | Comments: 10 comments
Related : Soap Opera, Spoiler, Television, The Young and the Restless 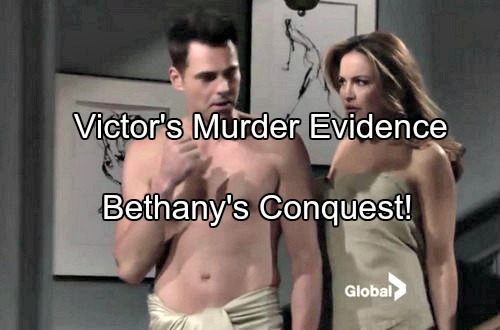 “The Young and the Restless” (Y&R) spoilers for Wednesday, May 25, tease that Adam (Justin Hartley) will contemplate the idea of leaving Genoa City behind. Chelsea (Melissa Claire Egan) and Adam will discuss their options. They’ll realize that a life on the run is better than Adam ending up behind bars.

When Chelsea goes to pack their bags, Victoria (Amelia Heinle) will show up to give Adam a piece of her mind. Victoria will let Adam know that she doesn’t appreciate the negative press. She’s having to put out media fires to protect the company. Adam will argue that it’s nothing compared to what he’s going through. He’s being falsely accused of murder!

Victoria will confess that she doesn’t think Adam killed Constance (Sally Kellerman). Chelsea will emerge with the suitcases and Victoria will be miffed. She’ll urge Adam to stay and fight the charges as well as Victor (Eric Braeden). Victoria will feel like they all need to stick together.

Adam will announce that he wants to have a little chat with his old man. He’ll head off to the state pen and Chelsea will grill Victoria about her agenda. Victoria will admit that she wants Adam around because he shares Victor’s thought process. She’ll believe they can use that to their advantage. Later, Victoria will read a news story about the positive direction of Newman.

In prison, Adam will lash out at Victor for causing his current mess. He’ll insist that Victor is to blame for the setup. Victor will talk about Adam knowing what it’s like to be wrongfully accused now. Adam will gripe that Victor always hated him. Victor will disagree and mention moments when he was proud of Adam.

They’ll both get somewhat emotional, but Adam will leave in a huff. Back home, Adam will tell Chelsea that they need to fight for their freedom. Victor will cry and open up to Meredith (Alicia Coppola) in the infirmary. Victor will claim that he has evidence that could nail Adam for Constance’s murder. He’ll say he’s the only one stopping Adam from ending up in a cell.

Meredith will gaze at Victor adoringly and state that his children don’t deserve him. Victor will reply that he doesn’t deserve Meredith. At Billy’s (Jason Thompson) house, he’ll try to call Phyllis (Gina Tognoni). She’ll continue to ignore his messages. Ashley (Eileen Davidson) will drop by and let slip that she told Jack (Peter Bergman) about Billy’s new woman.

Billy won’t appreciate Ashley’s blabbing and he’ll urge her to butt out. Once Ashley leaves, she’ll call Phyllis and ask if she’ll meet her in the park. After they arrive, Ashley will express concern for Billy. She’ll feel like he’s throwing away Victoria for a rebound. Phyllis will brush off Ashley’s fears, but it won’t do much good. Ashley will remain worried about how serious Billy’s feelings are.

Later, Billy will run into Jack at the athletic club. He’ll notice that Jack has a room key. Jack will give Billy updates on his plans for romance with Phyllis. Ashley will find Jack and speak with him privately about Billy’s love life. Jack will encourage Ashley to let Billy handle it. He’ll argue that Phyllis has backed off and it’s working out well. Ashley will think Billy could lose the love of his life because of his new woman.

Other “Young and the Restless” spoilers say Billy will slip upstairs to find Phyllis in lingerie. Despite Billy’s best efforts, Phyllis will refuse to let their relationship go any further. Billy will insist that they could share something special and real if Phyllis would get on board. He’ll leave broken-hearted and head downstairs to sulk near the bar.

A waitress named Bethany (Chrishell Stause) will walk over to Billy and start flirting. She’ll admit that she’s had a crush on Billy for quite a while. Bethany used to admire Billy when she worked at On the Boulevard. In Thursday’s episode, Y&R viewers can expect Jill (Jess Walton) to interrupt Billy and Bethany’s romantic evening. Stick with the CBS soap to watch the sparks fly.