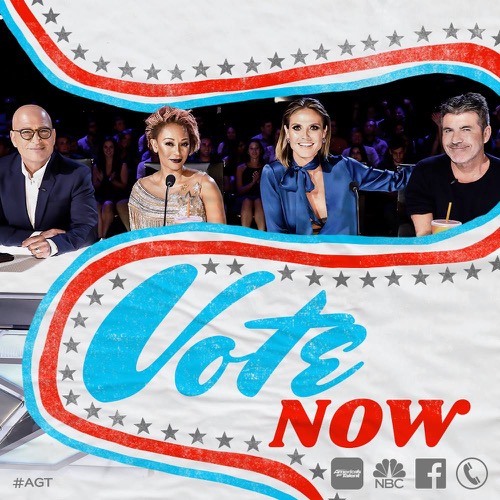 Tonight on NBC America’s Got Talent begins its new season with an all-new Tuesday, August 30, 2017, episode and we have your America’s Got Talent recap below!  On tonight’s AGT season 12 episode 18 as per the NBC synopsis, “Seven of 12 acts move on to the semifinal round.”

Highlights from last night’s performances were shown and then Tyra introduced Howie, Heidi, Mel and Simon. Tyra called the 12 acts onto the stage and announces the acts that are in sixth, seventh and eighth place. They are Colin Cloud, Angelina Green and Danell Damon & Greater Works.

The home audience tonight has the next 30 minutes to use the Dunkin Save to keep one of the acts from going home. She encourages everyone to call, text or use the online app to vote for their favorite act. We will know soon who has been saved by these votes.

Tyra sits with three acts back stage and again encourages everyone to vote to save one of these incredible performers. More highlights from last night’s show are shown including Sara & Hero and DIavolo. Tyra than calls Diavolo and Oskar & Gasper to center stage and announces that Diavolo will be moving forward and Oskar & Gasper will be going home. Diavolo is thrilled and thanks America for their votes and support. Mel is so happy for the group.

Final Draft and Keichi then take center stage. America has voted and the next act going to the semi-finals is Kechi. Both the judges and the crowd are on their feet with excitement for Kechi. She is overcome with emotion and never dreamt that she would make it this far in the competition. Howie thinks she is a beacon of light and said that America went toward the light by voting for Kechi.

A clip of John Dorenbos (an illusionist from last season) is show completing a magic trick with a card and a football. After the commercial break Tyra reminds everyone how to use the Dunkin Save. She then introduces Matt Franco. He is a magician who won America’s Got Talent in season 9. He does several tricks with the same carton pouring different kinds of drinks.