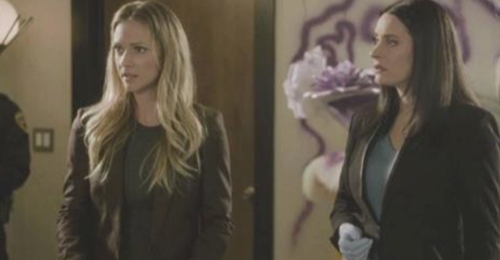 Tonight on CBS their hit drama Criminal Minds returns with an all-new Wednesday, January 11, 2017, episode called “Seek & Destroy,” and we have your weekly Criminal Minds recap below. On tonight’s Criminal Minds episode season 12 episode 10 as per the CBS synopsis, “The BAU team investigates a series of deadly home invasions in upscale San Diego neighborhoods.”

The BAU was called in on what appeared to be a deadly escalation in home invasions. There was apparently this gang in San Diego that often broke into homes when the homeowners were still there as some part thrill seeking game. But the gang hadn’t spent their time focusing on their victims. They had merely wanted their victims to see and hear what was being done to the house. The gang which was consisted of both men and women had put on fashion shows with the owner’s clothes, destroyed anything made out of glass even if it was family pictures, and sprayed graffiti everywhere as if they were marking their territory.

So the gang was mostly committed to destruction and the drugs found on the scene could have shown that they were addicted to the thrill. Yet, the gang eventually get around to the homeowners. The first time they had killed someone had ben Janelle Klecker. She had been home alone and her husband had been out of town on business however the gang went onto kill two more people after Janelle. They had killed Rick and Lenore Purcell. The gang had broken into Rick and Lenore Purcell’s home and had kept the couple hostage as the ransacked the house and stole mostly money as well as electronics before they had killed the poor couple.

However, the fact that the gang was stealing objects that were easy to sell and harder to track had told the BAU that the gang had at least one person that was criminally experienced. So Emily had wanted her team to get to San Diego before anyone else died yet the team had also used the plane ride to discuss the gang. They figured out that there must be a hierarchy with an alpha, the muscle, loyal second, and some mere foot soldiers. It was possible that the alpha had been the one to convince the others that they could have some fun in the houses and that most of the others had gone along as with it as way to belong.

The team however had also discussed how the gang had chosen the homes. The Kleckers after all had been on vacation for a few weeks before they had come home and Janelle had been alone. So the profilers theorized that the gang must be keeping a close eye on the homes they evade and that they had to have known the Kleckers’ schedule. Though what they were still trying to figure out as they landed in San Diego was how the gang had gotten to know the families. Did they stalk the families as perfect victims or had they found a way to appear harmless? And so the team had asked themselves what if the gang had been young enough to appear innocent.

The guys had gone and back and forth about how the gang was able to attach itself to the families and they eventually came to the truth. The truth was that the girls in the gang had gone door to door with sob story about their brother being sick with cancer and the homeowners would invite them inside as they signed a check. So Alvez had looked into the checks that the homeowners had signed and they were hoping that they would catch the gang before the next attack. But sadly they hadn’t moved fast enough and another couple had been terrorized and murdered though something had been different about that break-in.

There was still destruction around the house and the couple had been killed, but the alpha had changed the plan. He had brought his victims out into the living room to kill them and that made the profilers know that he was trying to reassert his dominance. Which is something he wouldn’t have had to do if he hadn’t been losing control over the others. Yet, they were also a few other things that were oddly different. Like how they didn’t steal anything and that someone had burned a hole into the family pictures. So that had been profiled because it showed a level of violence that didn’t match up with anything else.

However, the gang began falling apart after that home evasion. The others hadn’t liked it when their leader Zeke had killed the homeowners. They apparently hadn’t known that Zeke had been killing the others because he had always done it away from the party yet being confronted with what he was capable of had scared some of them. Three of them had wanted to leave the gang because they thought Zeke and his loyal second Bea were sick. Bea and Zeke hadn’t just killed people, they had enjoyed the act and celebrated it as if it was n achievement. So the other three had thought about fleeing in the night without telling Zeke or Bea what they were planning.

Kay had been the most vocal however she had nearly convinced Germ and Viv to leave with her when they were accidentally caught out. Bea and Zeke had heard what they were planning and had brought it up back at the motel. Bea had reminded all of them that they owed Zeke from saving them from selling themselves, abusive homes, and also been out on their own. So Bea had told them that they should all show their gratitude to Zeke. Though Zeke had cut Bea off before she could go on. He had instead appealed to the rest by reminding that they were family and he had also told the girls that they should go hang out.

So Zeke had manipulating the girls into leaving the motel because he had wanted to speak with the muscle. Germ and Zeke had known each other for a long time though Zeke had pushed that all away and had killed Germ because he said Germ was going soft. But the only one that knew what Zeke did had been Bea. Beas as it turns out could be quite manipulative herself because she had tricked Zeke into escalating the home evasions and she had also convinced to stay in San Diego. The gang it seems had always been on the move from state to state and they hadn’t left behind so much damage because they hadn’t wanted to be caught.

Bea on the other hand didn’t care about being caught. Germ’s body had led the BAU into figuring out who he was and who Zeke was. So it hadn’t been long before they realized that Bea was Bethany Adams. Bethany had been kicked out from several schools since she was in kindergarten and recently her father had updated his family picture on his Facebook page, but the picture had only included him with his wife and other daughter. Meaning Bea had been cut out of the picture and so that’s why she made Zeke stay in San Diego. She had been working her way to her parents’ house and had killed Zeke the second she revealed that she was true alpha of the group.

Yet, the police caught up to Bea as she was turning on her other two friends and they stopped her before she could harm her parents. So the mentally disturbed young woman is going to prison and her former friends had to be taken to the hospital because Bea had nearly killed them both, but no one was in more pain than Bea’s parents who still didn’t know where they went wrong with their little sociopath.