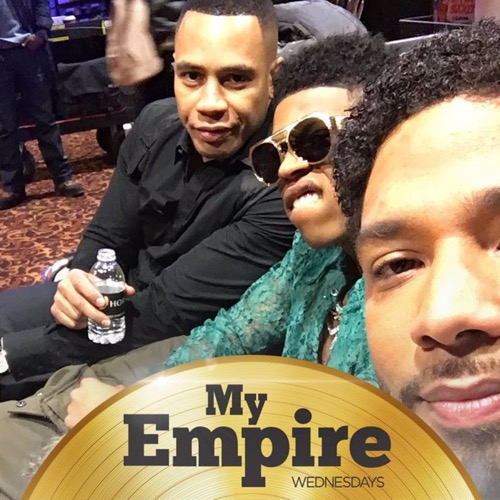 Tonight on FOX their blockbuster drama Empire airs with an all-new Wednesday, March 22, 2017, episode and we have your Empire recap below. On tonight’s Empire season 3 episode 10 Spring Premiere “Sound & Fury” as per the FOX synopsis, “After launching a deadly missile at Angelo, (Taye Diggs) Lucious (Terrence Howard) announces his new music project, Inferno, and puts everyone on notice—especially Cookie,  (Taraji P. Henson) who then vows to knock him off his throne for good.”

Empire’s Spring Premiere begins tonight with Lucious Lyon (Terrence Howard0 bringing his show Inferno to their fans, but Cookie (Taraji P. Henson) is furious he would pull a stunt like this while their son, Jamal (Jussie Smollett) is in rehab. He tells her if she wants war, she can fire the shot; she tells him to get ready!

Lucious takes the stage, telling the fans how he came from the streets of Philly, raising one platinum album after another; and now he has “Inferno”, where he retakes his rightful place at the top of Empire, at the top of his game.

Before he can finish, Cookie brings his mother (Leslie Uggams) on stage and the media want to know what is going on since he based his whole record empire and songs on his mother’s supposed suicide that he witnessed as a kid. Backstage, Cookie asks him how’s that for a shot, hitting all your vital organs; as fans and media keep yelling that he is a lair.

The following day, Lucious is with his attorney, Thirsty Rawlings (Tobias Truvillion), who believes Cookie got it all out of her system sabotaging her own company. Lucious says there is going to be a war.

Hakeem stands up and disagrees but since Lucious is walking by Andre calls him in to make the final vote. When Hakeem tells him Cookie already approved Tiana, he says then it is settled Nessa will do the showcase. When the meeting is over Xavier Rosen (Samuel Hunt) tells Becky if she comes at him in front of the bosses like that again, she’ll be fired.

Cookie is with Angelo DuBois (Taye Diggs), he is reassuring her that the citation for the DUI proves he wasn’t anywhere near that lake where that woman, Carla drowned. He just needs to get Jace to make a statement proving that. They talk about her first visit with Jamal since they sent him to rehab. He tells her to believe in him, and he kisses her goodbye.

Hakeem, Cookie, and Andre arrive at the rehab center, as they are waiting to see Jamal another famous singer, Tory Ash (Rumer Willis) is sitting in the room. Tory is obvious friends with Jamal when she goes toe to toe with Cookie saying she is surprised all her Lyon cubs aren’t in rehab; but she is willing to wait for Lucious. Jamal walks in reminding her that Lucious wasn’t coming.

All the Lyons are talking about Tory’s heroine addiction and her fall from grace when the psychiatrist tells her not to indulge in gossip about other residents. Just as they are about to start their family session, Lucious arrives. The doctor asks Jamal to tell his family about his journey through rehab since he is at his half-way point.

Jamal starts by saying he never wants to do through withdrawal again, the first week was hard. His brothers support him; but Lucious says IF he can stay clean. Cookie says he is clean and Jamal says he is and wants to come home, he has a melody in his head that he needs to lay down tracks to.

The doctor shakes her head at Cookie who encourages him to finish the program. Cookie admits she gave him those pills because he was hurting, Lucious says to tell the truth, she needed him to perform, and she chose her boyfriend over her own son. Cookie and Lucious continue to argue and the brothers just look at each other in silence.

Thirsty is outside, where he gets a hotdog, a woman passes him napkins, one with the name FRANK GATHERS on it. He goes straight to Lucious with it, and they figure it is Bam-Bam who is willing to testify against him to get a “get out of jail free” card. Lucious tells him to also keep an eye on the stuff about his mother in the media.

Andre meets Shine Johnson (Xzibit) in the parking garage, they talk about Nessa and the plans they have for her. Shine also tells Andre that with Inferno, Lucious is about to be bigger than ever and there is no way he is stealing Empire from him right now. Andre reminds him that he didn’t say he was going to steal from him, he was going to kill him. Andre walks away welcoming him to the empire.

Lucious confidently greets the media, he says the issue about his mother is a private matter and being handled; instead he asks them who they are voting for as mayor and he says he is endorsing John Meeks; implying he is not a criminal like Angelo DuBois. He goes on to offer a $300,000 cash reward for anyone who has any information that can lead to the conviction of Mr dubious DuBois.

Jamal is at the piano writing and singing some lyrics to a song in his head, Tory walks in and follows up with a harmony. They talk about how the music created a passion that made them feel like they were flying, and was the best high in the world. Tory tells Jamal they should go get it.

Empire has its new showcase, featuring Nessa. Nessa is performing when Cookie shows up and tells Lucious he keeps Angelo’s name on his lips only to stay relevant; a few seconds later Hakeem and Tiana cut Nessa off and take over the performance.

Shine is about to rush the stage when Andre grabs him saying Nessa is a pro who can handle it. Cookie sits back and enjoys it saying Tiana is a much bigger name than Nessa’s, and he should be thanking him for bringing her to his wack-ass concert. Nessa ends out strong but Nessa and Tiana get into a huge physical fight for the world to see.

Meanwhile, Lucious gets a call that Jamal isn’t in his bed at rehab; Cookie says they need to find him while Lucious says he needs to go see D-Major (Tobias Truvillion). Lucious and Cookie both ask D where Jamal is. He denies giving him any drugs and thought he was in rehab. Porsha (Ta’Rhonda Jones) rushes in saying there is a video of him and Tory Ash. Cookie knows where that is and shoves everyone out of her way.

Thirsty drags Lucious’ mother and Becky out to get Bam-Bam’s mother out of the seniors’ home. Becky says she is not there to kidnap two old ladies; the women in the back seat aren’t as stupid as he thinks.

Jamal and Tory are in a recording studio when Lucious and Cookie rush in, they stop when they hear how beautiful Jamal’s singing is again, without drugs. He stops the second he sees his parents, who demand to know why he is there.

After Cookie gets nasty with Tory, who doesn’t back down, Jamal says this is his rehab. Lucious brings Cookie out saying this is okay, and she says she will be back to bring his ass home when he is done.

Bam-Bam’s mother arrives at the diner he works at, where Lucious tells him he doesn’t speak, only Lucious speaks. Lucious reminds him that he needs to remember his Ps and Qs when he gets in front of the grand jury; especially since he took care of his dying daughter and his mother while he was locked up.

Thirsty and Becky are in the car when she asks what she can do about Xavier, he flashes a gun but tells her to let the universe do its magic. She is so confused with his bs.

At the FBI, Tariq (Morocco Omari) is told he is off the case because it is closed and he had everything hanging on a tainted witness; the biggest problem was he tanked the case because he failed to disclose that their suspect, Lucious was his half-brother. Tariq is put on paid leave.

Cookie and Jamal watch as Angelo DuBois is cleared of all charges. Jamal says he is so surprised but not at the same time. Cookie asks Jamal if he is a dope fiend. Jamal is so high on his music he admits that he doesn’t want any substance to mess with that. Cookie is happy to hear that and feels things will finally be okay.

Jamal smiles and says that Lucious did all this just for her, that its a twisted kind of love. Cookie says he is planning his next move, as she ponders about what Jamal just said.

There is a huge meeting the next morning, where Xavier is immediately fired as he is removed by security, he begs Becky to back him up. She tells him it is just business as they drag him out. Lucious says Inferno is to be everyone’s number one priority from now on. He also gives the position of head of A&R to Anika Lyon (Grace Byers); Cookie walks out.

At his personal office, Cookie comes to visit Lucious with a baseball bat. She smashes his first album saying her DNA is in that one, not his wife’s. She leaves but he continues to hear things smashing, he gets up and says, “Let’s play!”

She asks who was his muse when his first album was indicted. He comes to close and she smashes him in the head with the baseball bat. He chases her into the boardroom where she screams that she gave him 3 sons and had a miscarriage, spent 17 years in prison so he could build this empire. He says she is going to die. She says, you are a Lyon let me hear you roar.

He orders security to go home, she gets on the elevator and says she is just getting started. She destroys his grand piano and drops the bat. She asks if he is trying to erase her; after all she has done for him? That he built this company on her back, she breaks down crying asking if he plans on just giving it all to Anika?

He stops her from hitting him again, she touches his face and they kiss and have it out. At his place, Jamal is playing the piano, and we have flashes to Lucious and Cookie kissing on his broken piano. She stops him and says no, she told him she was done with him and she meant it. She leaves Lucious broken in his office.