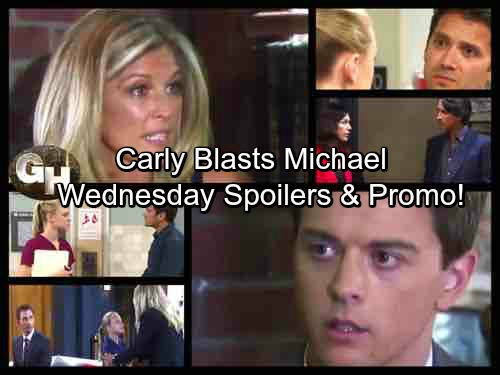 General Hospital (GH) spoilers for Wednesday, September 20, tease that Finn (Michael Easton) will have second thoughts about Anna’s (Finola Hughes) plan. He doesn’t like the idea of preying on a hypochondriac’s weakness, but Anna will insist that it’s necessary. She’ll contend that tricking Cassandra will be for the greater good.

Meanwhile, Valentin (James Patrick Stuart) and Lulu (Emme Rylan) will support Charlotte (Scarlett Fernandez). She’s worried about her friend, so they’ll all be waiting as Bailey undergoes scoliosis testing. Charlotte will be glad to have both her parents with her. They’ve actually been getting along and that trend will continue.

General Hospital spoilers say Lulu will see a different side of Valentin throughout this ordeal. Valentin may open up to Lulu about feeling weak in the past. She could see a glimpse of vulnerability in the normally confident Cassadine.

At GH, Dante (Dominic Zamprogna) will be perplexed by Ava (Maura West) and Valentin’s connection. He’ll point out that Ava poses a threat to Valentin through her statement against him. Since he doesn’t know Ava recanted, Dante just won’t understand why they’d be in business together.

Kiki realizes a deal has been made, so maybe she’ll tell Dante what Griffin (Matt Cohen) helped her figure out. Across town, Kristina (Lexi Ainsworth) will struggle with uncertainty. A risky decision will come with major reservations, but she’ll press on.

When Molly (Haley Pullos) spots her, she’ll wonder what Kristina thinks she’s doing. It appears Kristina intends to approach Parker (Ashley Jones) on campus. Instead, Molly will urge Kristina to run as far away as possible. She’ll be convinced that this can only lead to drama.

However, it looks like Kristina just won’t be able to stay away. Whether she reunites with Parker or ultimately moves on, Kristina could really use some closure. Elsewhere, Carly (Laura Wright) will lash out at Michael (Chad Duell) for believing Nelle’s (Chloe Lanier) story. She’ll suggest her son is far too trusting of the woman who tried to destroy their family.

Michael will maintain that Nelle has changed and he’s forgiven her. Besides, pretending to sleep with someone is one thing. Cold-blooded murder is quite another. General Hospital spoilers say Michael will argue that Nelle isn’t a killer. He’ll refuse to accept that Nelle did anything sinister on that fateful trip to Maine.

Carly will want Michael to leave a little room for doubt. She’ll think Michael should demand proof that Nelle’s being honest. While Michael mulls that over, Nelle will receive guidance from someone. It sounds like she’ll also have some problems to contemplate.

GH fans will be anxious to see where this storyline is headed next. We’ll give you updates as other news comes in. Stick with the ABC soap and don’t forget to check CDL often for the latest General Hospital spoilers, updates and news.