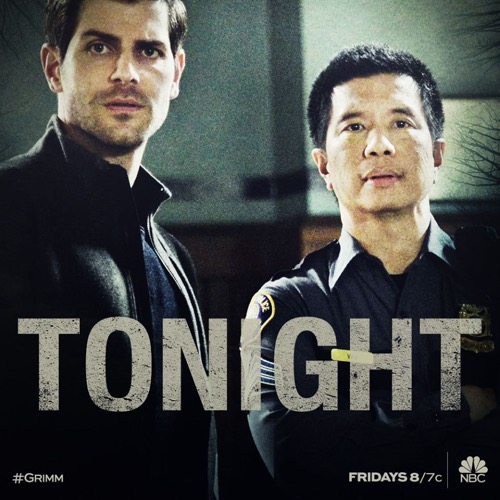 Grimm returns to NBC tonight with a brand new Friday, January 27, 2017, season 6 episode 4 called “Oh Captain My Captain,” and we have your weekly Grimm recap below. On tonight’s Grim season 6 episode 4 as per the NBC synopsis, “Nick, (David Giuntoli) Hank (Russell Hornsby) and Wu (Reggie Lee) investigate a terrifying clairvoyant Wesen who has his eyes set on terrorizing a young family; Capt. Renard (Sasha Roiz) is left reeling from the appearance of an unexpected guest; Diana has some interesting news for Monroe (Silas Weir Mitchell) and Rosalee and Eve returns to the catacombs beneath Nick’s loft to search for answers to her bizarre visions and side effects from being healed by the mysterious stick.”

Renard was beginning to hallucinate. He had unfortunately, thought he had been visited by an old friend and had even thought the other man was real however, Meisner was disappearing and reappearing based on Renard moods. Which indicated that Meisner was merely an illusion. But Renard was under a tremendous amount of stress. He had people contacting him and asking why he had given up on being Mayor. So there were some difficult questions that he had to answer and all he could say was that it was the Grimm’s fault.

However, Renard still had to work Nick at the police department. The two men had come to an agreement and they had blamed that had happened on Bonaparte. So that was something that Renard quickly regretted when he saw Nick and the others again. He hadn’t been able to stand the way the rest of his officers had cheered at seeing Nick again and he was still hallucinating Meisner at the worst of times yet Renard had given Nick and the guys a warning. He told them that they had to remain above board or he’ll fire them the first he gets.

So the guys had said that they understood and then later they had seen Renard talking to himself. Renard had been arguing at no one in his office and the blinds had been up so the guys saw everything. They saw the moment Renard first lost his temper with his hallucination and when Renard tried to throw his coffee at Mesiner to see if he was real. Yet, the guys figured that whatever was going on with Renard wasn’t their problem and so they chose to get back to work. They had been assigned to a kidnapping case and the case had been deemed unusual.

The baby that had been kidnapped had allegedly been taken by a monster. The baby’s mother had said that she went to check on him in the middle of night and had seen a man standing over his crib. Though when she tried to tell that man to get away from her baby, he turned around and his face was revealed to be a monster’s. It had had three legs, three arms, and its skin turned into a bluish-gray color. So the mother had tried to fight the monster on her own and it had used its incredible strength to throw across the room. Where she had been knocked on unconscious.

Now the father didn’t believe the mother’s tale. He thought that the bump to her head had made her think that she saw a monster when really all she saw was a man that was kidnapping their baby. But the mother had told the police over and over again that she hadn’t made the monster up. So Nick had asked her to draw what she saw while he and Hank went off to speak to the father alone however the father had had his own concerns. He said that his was practically obsessed with their baby son and that she took pictures all the time.

The father had added that his wife didn’t think reasonably when it came to their son and so he had told the detectives not to believe her about the monster. However, the mother had overheard that and she had assured the detectives that there had been a monster and she had even showed them the picture she drew of it. So the guys had taken that picture to the tea shop. They knew that they needed help with identifying the Wesen that baby Auggie’s mother had described and so the couple had helped them.

Yet, they’ve been thinking lately that maybe their life and being around Nick wouldn’t be the best atmosphere to raise a child. Rosalee had just found out from Diana that she was having more than just “a baby” and so she was worried about what she was bring up her children in though working together they had all realized what specific Wesent they were dealing with. The Wesen was called El Cuegle and took newborn babies for something called an abort of doom. So everyone had assumed that the Wesen was eating the babies after he kidnapped them and Auggie wasn’t his first.

There had also been a baby that was kidnapped eighteen years ago as well as two years ago. Though the guys think that the Wesen might have taken more babies than that, but the families didn’t want to come forward and say that a monster took their baby. So finding the El Cuegle became a top priority for everyone involved and Monroe had felt that finding people like El Cuegle was worth doing. He told Rosalee that they lived in a world where the other shoe was bound to drop and so he said that they had to be prepared to fight no matter the case.

So that had cheered up Rosalee however she still said that she would have liked to live in a world without shoes. But there was no escaping what some people were capable of a simple mistake on El Cuegle’s part was what led to his capture. The El Cuegle had gone to the pharmacy to pick up medication for Auggie because Auggie had a cold and the Wesen had apparently collapsed in the store after getting a vision. And so someone had seen him change into a monster and surveillance cameras had picked up which car the monster fled in.

What the couldn’t understand though was why the creature had risked being caught by stopping for drug medicine. They thought that maybe he preferred his victims to be healthy when he ate them. However, they were still wondering why he collapsed and so the first thing they did once they had him in their custody was ask why he did what he did. So the El Cuegle told them the truth about his kind. He said that they had visions of the future and that often they had to stop what the babies eventually turned into by easting them.

The Wesen said that Auggie would grow up to kill both his parents and that he would go on to do much worse. Yet, neither Hank nor Nick thought they should let the guy go because they hadn’t been so sure about his visions. So he had given them a name to check and they found out that he had once returned a baby that he had kidnapped. The baby had been Kenneth Slater and he grew up to kill ten innocent people, but what was worrisome was the fact that the detectives could prove the Wesen had been in the city.

Though just as they were beginning to believe the creature, he escaped police custody and attempted to kill Auggie again. So they had tracked him down at the baby’s home and they were forced to shoot him yet in the end they had seen what he was talking about. Auggie’s parents did have a marriage that was collapsing and things did look as if they were bound to get violent. And so the guys had to leave the house knowing that Auggie would grow up to be a killer.