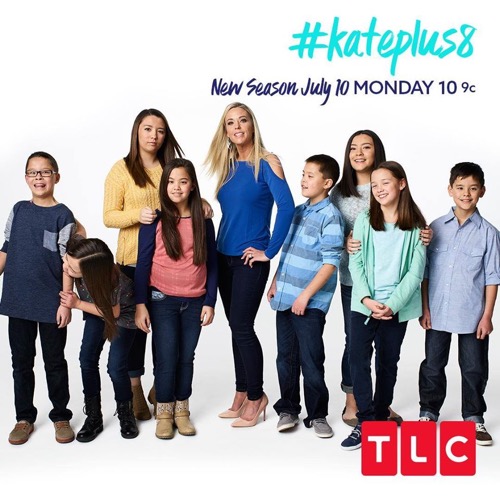 Tonight on TLC Kate Plus 8 returns with an all new Monday, July 10, season 5 episode 9 called, “A Haunting at the Gosselins” and we have your weekly Kate Plus 8 recap below. On tonight’s episode as per the TLC synopsis, “The Gosselins invite their friends over for a Halloween party and turn their barn into a haunted house, as Season 6 begins. Kate stresses about party planning, food prep and costumes while trying to deal with guests arriving before everything is ready.”

Kate and the kids have been doing well. The family appears to have actually grown closer since we last saw them and, according to Kate, the kids have even started to question why she was still single. But Kate was very clear when she said that part of her life will happen when it happens. So in the meantime she’s simply focusing on the kids and on tonight’s episode she wanted to do something fun with them. Like creating a Haunted House for Halloween which were usually fun for everyone however nothing ever goes to plan with Kate and her eight!

The kids were still kids in the end and so they were excited at first about doing a Haunted House though no one had wanted to put in the effort of creating said Haunted House. So Kate had gaged their opinion by asking them if they wanted to do Homework or clean out the barn and all of her children had said they would prefer doing homework over dealing with dirt, chicken poop, and rats. There were rats running throughout the barn and only one child thought they were cute fuzzy creatures.

However, everyone hated cleaning out the barn. It was nasty and Kate at one point had started screeching when she thought she came across a dead chicken. So the barn part was probably the worst yet Kate’s stressful days were far from over because she had left planning till the second and so there were a whole bunch of things that she needed to do. Kate was the parent hosting the Haunted House after all and that meant she also had to create gruesome scenes, gather volunteers that were otherwise reluctant friends, and do all of that in two days’ time.

So Kate could have lost it right from the beginning and the one reason she hadn’t was because she had support. She had Jamie who was her best friend and Jamie had kept her clam for the most part. Though with cooking all the food and finishing up her children’s customs on top of everything else, the pressure did get to Kate eventually and so she hit a wall. She just stopped doing everything and claimed the party was a stupid idea, but she had claimed literally an hour before the party and so she was sort of forced to go on despite everything.

Except there were still a few complications throughout the day. There was a bird that tried to fly into the cake and guests that had surprisingly arrived early. But Jamie and the kids knew that they had to warn the guests about Kate and so they advised everyone to give the hostess a wide berth. So that allowed Kate to finish a few things and also get on her costume before she had to see anyone. And funnily enough, everyone had a good time at the party while Kate was the one that thought everything sucked.

The kids on the other hand had all enjoyed their costumes and had tried to cheer up their mother whenever they saw the few cracks reappearing. Yet, otherwise things were a great success. There was food at the start and then group by group got to go into the Haunted House. So the older girls went in first and they tried to be tough however they came across a rat they thought was fake and screamed to the high heavens when they found out it was real. And so they hadn’t gotten rid of the rats like they thought.

Though it was ok because it added to the experience and all the kids were eventually scared. The younger ones a little more than the older ones, but Kate and her mom friends had gone in after the kids and they too were scared. They had apparently hated it when people jumped out at them and simply knowing something was coming had had them all on edge. So Kate had tried to analyze everything she saw in there because knowing it was fake had helped only she had truly hated it when the things turned out to be real.

So after the fright, Kate kicked off the next part of the party and they all got to hang out around the bonfire. The bonfire was just a way for everyone to relax and talk with their friends so the older kids preferred that part. However, Cara who had been pretty blaze about everything had said her favorite part of Halloween had been the bonfire after the kids had all gone. She and her twin Maddie had thought the younger kids were too much for them as in too immature. And so they enjoyed anything that didn’t involve their younger siblings.

And while everyone got to have the fun they all wanted, Kate had been sure to remind everyone afterwards that the Halloween gathering wasn’t going to be an every year thing!