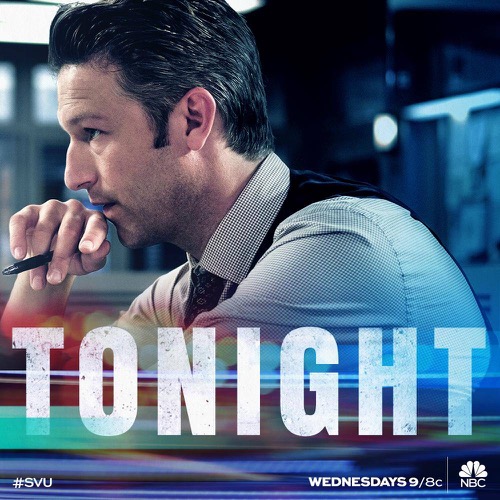 Tonight on NBC Law & Order SVU returns with an all-new Wednesday, October 11, 2017, episode and we have your Law & Order SVU recap below.  On tonight’s Law & Order SVU season 19 episode 3 as per the NBC synopsis, “When a man is found castrated and left for dead, Rollins and Carisi uncover three female suspects with possible motives. Meanwhile, Langan brings devastating news for Benson.”

Fin and Cressie go into the Crestline hotel. They meet an officer in the hall and enter a hotel room to find a man’s testicles in the ice bucket. There is a bloody knife in the sink and they follow a trail of blood into the stairwell. There they find an unconscious man. In the hospital Olivia and Rollins learn that the victim is Jason Carr. Fin and Cressie interview the woman who called 911. Her name is Nora and she was visiting a friend when she heard screaming in the holtel. They then interview a woman named Julie whose credit card was used to book the room next to Jason. She said she was home all with her boyfriend. She looks in her wallet and tells them her card is gone and must have been taken by someone. Fin thinks she seemed nervous.

Jason wakes up and tells Olivia he was speaking to a woman named Angela in the bar and she invited him up to her room. That is the last thing he remembers. Jason is married and hasn’t even called his wife. The team reviews the facts and Olivia says this leave of violence is usually related to revenge. Cressie reviews video tapes from the hotel and sees Julie, the woman who denied being at the hotel enter the lobby. She is called in for questioning and they show her the video as well as a tape of her car entering the city. She continues to deny know him and leaves. They all can tell she is lying. Jason also denies know Julie.

The team interviews a waitress at the steakhouse whose name was on the knife used to cut Jason. The waitress remembers that Julie was there last night with one of their regulars Evelyn. It was a party of three and Nora paid the bill. Nora is called into the station. She denies know anything but Fin and Cressie confront her and she changes her story. She remembers having dining with Julie and said she just met Eve that night. Eve tells Rollins that she just met Nora and Julie that night. The team does some research and learns that all three girls went to the same high school. There were all in the same after school club and Jason was the faculty advisor.

Jason is asked several questions about the women but says he doesn’t remember and asks them to leave. His wife is obviously not happy with the situation. Olivia and the team fill Barba with the facts of the case. Twenty years after graduation three women mutilate their teacher but no one is talking. They decide to arrest the three women for obstruction of justice and put them all in the same holding cell. Olivia gets a call the Noah’s case of possible child abuse has been closed. She has been cleared of any wrong doing. Blake comes to tell Olivia that Elle Porter’s mother is actually alive and has filed for custody of Noah. She loses it and tells him to leave. She can’t lose Noah.

All three women start arguing in the cell immediately and then tell Cressie that want to tell him the truth now. They women tell the same story. Jason gave them attention and made them feel special while they were in his class in high school. He used them, had sex with them and dumped them. The three women ran into each recently and started talking about high school. Soon they shared their stories and decided to confront Jason. Julie got Jason to the hotel room and then Eve drugged him and cut him.

Olivia takes Eve’s statement along with her lawyer. Olivia tells her the time has run out for charges to be pressed against Jason since it has been over 20 years. She describes an incident that Jason used force when he raped her. There is no statute of limitations for rape one and Jason is arrested. Jason’s wife comes to station and confronts Olivia. She is obviously younger than Jason and tells Olivia they met when she was an intern at his company. Eve testifies that Jason held her down, held a cork screw to her face and raped her. Jason’s attorney asks Eve if she is making the whole story up to get off for castration him. She denies it and pulls out a shell that Jason gave her many years ago. She asks him if he remembers it. She then smashes it, cutting herself in the process.

Court is adjourned and Jason’s wife meets Rollins at the station to give her a poem her wrote. She also shows them the same type shell that Jason gave to her. Jason testifies that he knows that he made a mistake but her truly cared about Eve at the time. He never forced Eve to have sex with him. Barba has Jason read the poem named “Corkscrew”. It is obvious from the poem that Eve was raped. Jason’s lawyer makes her closing arguments urging that Jason has already been punished enough by being castrated. Barba argues that the case isn’t about being fair, it is about being just. Jason is found guilty.