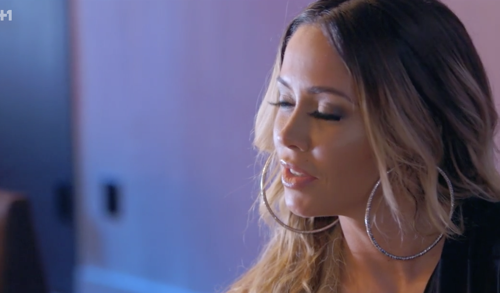 Tonight on VH1’s hit series Love & Hip Hop returns with an all-new Monday, November 13, 2017, episode and we have your Love & Hip Hop recap below for you.  On tonight’s season 8 episode 3, “Bodied,” as per the VH1 synopsis, “James R. tries to get even with MariahLynn; Dreamdoll confronts Bianca about her beef with Bri; Lil’ Mo and Karl are looking for a comeback; Navarro tries to mend the rift between Anais and Ashley.”

This week on Love and Hip Hop New York Lil Mo is back in New York and working on her music. She has brought her husband Karl with her. They meet up with Remy. She congratulates Mo on her new album and tells her “Now that I have a husband it’s hard to be traveling and away from the family.” Mo understands. She tells Remy “I have five at the house and I know that there are a lot of people coming for you.” Remy says “We just have to block the negativity.”

Mariah is working with Dream Doll. She tells her “I have been trying to be this new me who is all about the music and business.” Mariah tells Dream about the incident between James and Self at the party. Mariah wonders “Do I know him as well as I think I know him?” She also says “I’m going to give him one more chance at this video shoot and if he can’t act right then he is neutered.”

Anais is really upset after the incident with Ashley. She tells Navarro “You need to tell your girl that I’m like your girl too.” Navarro corrects her and tells Anais “That’s my wifey and you do have to respect her and she needs to respect you too.” Anais says “I don’t have to respect her. She came at me wrong. I signed on to work with you and she acts like she’s the boss.” Navarro feels caught in the middle. He tells Anais “That’s my girl, but you’re my friend too and I want the two of you to work together.” Anais is not having any of that. She breaks down crying and talks about how she has struggled in the music business, How she’s been robbed by managers and disrespected by producers. Navarro feels guilty. He wants both women to get along, but he isn’t sure how to make it happen.

James is still very upset about the incident between him, Mariah and Self at Mariah’s single release party. James decides to meet up with Sofia to have a casting call for his next video. He tells her “I got this new video Bad Girls and I want you to be in the video.” Sofia tells him “I want to get away from the video vixen thing and work on my DJing and singing.” She tells him “If I do your video you have to come be on one of my records.” James agrees. Sofia asks about his relationship with Mariah. James tells her “She’s not really living up to her end. She’s not doing what I expect my lady to do.”

Navarro meets with Rich to discuss the situation with Anais and Ashley. Rich tells him “You have to get the two of them together and let Ashley know that you aren’t going anywhere. You also have to let Anais know that ya’ll need to rock this business relationship together.”

Remy meets up with JuJu to talk about things. Remy tells her “I’m trying to keep my wonderful husband happy and keep my career going.” Juju tells her “Just remember you can’t do it all. You have to slow down. I know when my husband and I tried to have a baby I would take the test every month and wonder if there was something wrong with me when it came back negative because he already had a son.” This causes Remy to stop and think. She decides to go ahead with the IVF treatments and see what happens.

Lil Mo has converted to Islam. She is doing her afternoon prayers when her husband walks in and asks what’s on her mind. She tells him “You need to get back in the ring and I need to get back in the studio.” He tells her “I know. When I go back to training camp no one else will exist.” She asks him “Will I exist ?” He tells her “No. not even you.” Mo tells him “We are both going to have to make some sacrifices to get this money.”

Dream Doll, Jacque, Bri and Self are all hanging out. Bri tells them “Bianca is bummy. She is always starting some mess.” Bri tells them about how Bianca came to her party and brought a gang of girls who tried to jump on her. Jacque is very upset. He says “I hate this situation because ya’ll are both my friends and I hate that I have to worry that if I’m out with one the other one is gonna be mad.” Bri tells Dream “You better watch out. Bianca is partners with your girl Mariah at Gwinnin.” Dream says “Mariah wouldn’t get into any of that.” Self is also quick to jump in. He says “We are not having any of that at Gwinnin. We are all about making that money.”

Navarro decides to take Rich’s advice and bring Ashley and Anais together to try and squash the issue. Anais is hostile from the jump. Ashley tries to apologize. She tells Anais “I didn’t mean to act like that toward you at the end of the day and I’m sorry.” Anais pops off, but once she calms down she tells Ashley “I didn’t send him any provocative pictures. The pictures are for business. Can you accept that?” Ashley says she can and the two women reach an uneasy truce.

Dream Doll and Bianca meet up to try and squash the issue with Bri. The discussion deteriorates quickly into an argument. Dream tells Bianca “You never want to admit that you’re wrong.” Bianca fires back “I’m not wrong and I’m gonna fire off on Bri every time I see her.” Dream is not happy to hear that. Bianca goes on to tell her “Mariah is on my side.” Dream says “Oh so now you two are gonna jump every time you see us? Just don’t touch my friend again.”

Mo is spending time with her son Justin. Justin wants a cell phone. Mo asks him “Why do you need a phone?” He says “So I can keep in touch with you when you are gone.” Justin then reveals that he has googled his mom and dad and has seen the rumors about his mom and dad. She asks him “Do you believe the internet?” He says “No.” Mo asks him “How does it make you feel?” He tells her “It makes me mad sometimes.”

James is working on his video for Bad Girls when Mariah pops up. Sofia blurts out “I thought you weren’t with her anymore?” Mariah is stunned to hear this. She asks James “We’re not together anymore?” James looks a bit stunned and he isn’t sure what to say, He’s caught in a trap! Mariah flies off and asks Sofia “You knew we were together right?” Sofia tells her “If you would let me talk.” This does not sit well with Mariah at all. Mariah goes after Sofia full force and has to be dragged out of the room by security. James tells her “Go back to Self.” Mariah tells him “That’s right the winning team!”