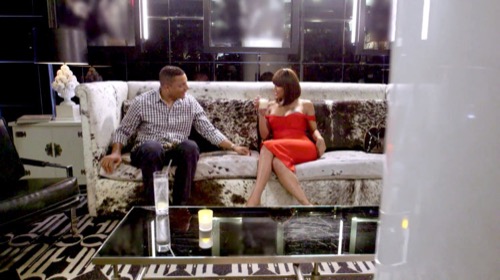 Tonight on VH1’s hit series Love & Hip Hop returns with an all-new Monday, November 27, 2017, episode and we have your Love & Hip Hop recap below for you.  On tonight’s season 8 episode 5, “Streets Are Talking,” as per the VH1 synopsis, “When confronted by rumors about Yandy, Bianca goes on the attack. Safaree suffers a huge loss. Mariah and Self discuss Dreamdoll. Rich and Anais have a rendezvous. Karl takes a lie-detector test for Lil Mo.”

This week on Love and Hip Hop New York Safaree and Dream Doll are out on a date. Their relationship is progressing nicely until Dream tells him about the smoothie encounter with his ex-girlfriend. Safaree tells her “I want you to calm down. You need to calm down and stop letting people take you down to their level.” Dream says that she understands. Safaree goes on to tell her “One day you are going to meet my family and I know my mom would like the smoothie throwing behavior.” Dream is excited that Safaree wants to introduce her to his family and she promises him that she’ll behave.

Rich has a meeting with Bri. They discuss the shoe-throwing incident at the industry party and Rich tells her “You have to calm down. I don’t condone shoe throwing, but you started it.” Bri says “This girl is always starting with me.” Rich says “Well since there is obviously no squashing this beef we need to move on.” He introduces her to Navarro. Navarro tells Bri “I’m an industry lawyer.” Bri wants to know who he’s worked with so Navarro drops names like Fetty Wop and Anais. Bri is impressed and the two agree to meet again.

Mo and Karl go to have Karl’s lie detector test administered. Mo is extremely nervous. She is deathly afraid Karl is gonna fail. Mo gets the results of the test and Karl fails. She is angry and devastated. She tells her husband “I have Dr. Jeff coming to try and help us..” When Dr. Jeff gets there the session is immediately intense. Dr. Jeff asks him “The lie detector test says that you had some kind of sexual contact.” Karl continues to deny it. Mo tells him “You have pictures of women’s private parts on your phone.” Dr. Jeff tells her “The fact that you stayed means that you want to work on it. “

Mariah meets up with Bianca and they discuss the incident between her and Dream. Bianca tells her “Dream told me that if you and I tried to roll up on her friend it was going to be an issue.” Mariah is pissed to hear this. She tells Bianca “Even though we’re label mates, you’re my girl and I have your back.” Later on Mariah goes to Self and tells him about her conversation with Bianca. He really doesn’t seem to want to hear it. He tells her “What I’m hearing is a lot of hear say.” Mariah is upset. She tells him “I heard it from Bianca.” Self tells her “Yeah, but Bianca could tell you anything.”

Remy and Papoose are looking for a building to open their new clothing store. Pap tells her “Since you have the building and the new business coming together can we talk about having this baby?” Pap goes on to tell her “I want us to go to the Dr. and get this in vitro in the works.” Remy says “I’m with it, but I was talking to JuJu and she had me wondering what would happen if it didn’t work.” Pap tells her “You can’t think like that. You have to think that this is going to be the best baby ever.”

Safaree is grieving the loss of his uncle who was murdered. Dream Doll is by his side. He tells her “My father wasn’t in my life. My uncle took his place. He used to brag that I was his nephew and he was so proud of me.” He also tells her “I never cry.” Dream hugs him and says “You’re so strong, but it’s ok to cry because you’re hurt.” Safaree is really happy to have her by his side.

Jonathon, Yandy, and JuJu meet up at the Slipper Room. Yandy says “I talked to Bianca and she told me that someone said that she was talking about me.” Jonathon tells her “I said it.” Yandy seems surprised. She asks him “Why would you say something like that?” Jonathon tells her “I heard it from a credible source.” JuJu says “I want to arrange a sit down with you and Bianca to try and smooth things over.” She tells Jonathon “I don’t think you should be there.” Jonathon disagrees. He says “If someone says something about my friend I’m going to confront them.”

Even though Anais has worked things out with Navarro and Ashley she decides to hedge her bets and have a meeting with Rich Dollars, The meeting quickly goes from business to pleasure as there is more heavy petting than talking money and Rich is worried that he could find himself in trouble again.
Karl is working out with Snoop. He tells her about the lie detector test. Snoop tells him “That woman actually loves you.” Karl wants to make things right before he goes to training camp and total isolation.

Yandy and Bianca sit down to have a chat. Bianca tells JuJu “If I love and care about you why would I say something about you that I couldn’t say to your face?” As the two ladies are talking Jonathon walks in and joins them. At first, Bianca is confused, but when Yandy stands to greet him and he sits down it becomes clear. Bianca says “Someone has been spreading rumors saying that I am talking about Yandy behind her back. Yandy is my family and I wouldn’t do that.” Jonathon steps in and says “I told Yandy that you were talking about her because I heard that.” Bianca says “Well I don’t know what you’re relationship is to Yandy.” Jonathon says “We’re family too.” The argument gets heated and Bianca throws a drink across the table at Jonathon. Once Yandy gets things calmed down Jonathon steps up and apologizes because he can’t say who started the rumor and for the position that Yandy was placed in. Bianca was not receptive to Jonathon’s apology at all.