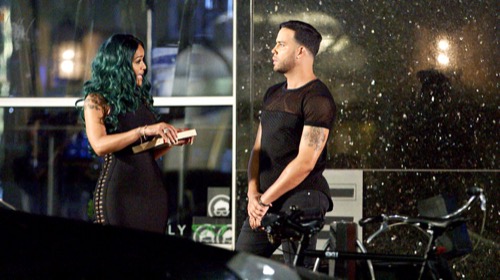 Tonight on VH1’s hit series Love & Hip Hop returns with an all-new Monday, December 18, 2017, episode and we have your Love & Hip Hop recap below for you.  On tonight’s season 8 episode 8, “Catfished,” as per the VH1 synopsis, “Jonathan’s boyfriend is lying to him. Jonathan’s world is shaken when he and Anais surprise Trent at the studio and discover that he isn’t where he said he would be.”

This week on Love and Hip Hop New York James wakes up and Sofia is in his house. She pours him a glass of champagne and they toast to the dog. Sofia tells him “Stassi is fine.” James tells her “We are having a release party for Bad Girl and I want you to be my bad girl.” Sofia is not so sure about this. She asks him “Who’s going to be at this party?” James tells her “Everybody is going to be there.” Sofia tells him “I don’t want to catch a case.” James asks her “What do you think of me?” Sofia tells him “You’re nice, attractive, fun and a player.” James asks her “Do you think you could be my girl?” Sofia says “Let’s see what happens.” The two kiss.

Trent and Jonathon are out finally having a real date, but Jonathon is still not happy. He wants Trent to spend more time with him. Jonathon tells Trent “I feel like for every ten text messages I send you I only get one in return.” Trent tells him “I have to get my career off the ground. I came back to the city and ended up living out of a trash can. I don’t want to go back to that.” Jonathon listens and seems a bit more empathetic. He tells Trent “You are beautiful and talented. You are going to do amazing things with your career and I have your back.”

Remy and Pap have finally found a Dr. to start their IVF procedure, but they are both still dealing with the loss of the baby Remy was carrying last year. Pap wants to support his wife no matter what. Remy is terrified that she may not even be able to go through with the IVF procedure and she is worried about what this news will do to her husband and her marriage.

After all of the tests are done the Dr. tells them that they are terrific candidates for the IVF procedure. She tells them “You will be taking hormone injections for ten nights to get the eggs ready for harvesting.” Remy asks “I have a lot going on for the next couple months. Will my eggs dry up if we wait?” The Dr. tells her “No it won’t hurt you to wait a couple months.” Pap and Remy are super excited.

Juju is casting for roles for her new play about her book. Her first thought for the male lead is Safaree. She meets with him to discuss the idea and he is super excited to do it. Juju tells him “You have to audition for the role. You can’t just get the role because you know me.” She hands him a script. Safaree says “You want me to memorize the whole thing?” Juju says “You can do it.”

While they are talking Safaree realizes that he has a meeting with his mother. After Safaree introduces Juju to Momma Shirley she leaves. Safaree talks to her about his career. He tells her “I had a performance and I dedicated it to uncle Vern.” His mother tells him “You need to stay focused and not let these ladies distract you. “ She also tells him “Just for future reference Juju is the type of lady you need to be looking to bring home.”

Jonathon heads to the studio to try and surprise Trent and show his support after their conversation. When he shows up the receptionists let him know that Trent does not have a session booked that night. Jonathon is pissed. He steps outside where Anais is waiting for him. He tells her “Now I am going back to checking up on him and spying so that I can keep an eye on him. This is a game of chess that he won’t win.” Anais tries to calm him down, but he is not hearing it.

Jonathon decides to go undercover and makes an account on Grinder to catch Trent’s dirty deeds. As soon as he posts the account Trent hits him up with a message and then the dirty pictures start to fly. Jonathon is pissed!

Jacquees is hanging out with the creep squad. Self tells Jacquees “James R tagged in some kind of video release party thing.” Snoop says “Why would he tag you in some video release party when no one has even heard the song?” Jacquees says “I think we should go, not that I care what he or Sofia are doing, but he did give my girl a dog.”

Mariah decides to have a slumber party to show off her new body. Everyone is surprised to see Mariah’s new breasts. She tells them “I have to let them rest for a month, but I want to go to James’ video release party to see if Sofia is all right.” Bianca tells her “Do whatever you feel because I have theGood lu same problem with B’s talking about me online.” Kiane asks who they are talking about. When Mariah mentions Bri Kiane says “Bri came at me claiming she taught me how to rap when I am clearly better than her.” All of the girls laugh.

Juju’s play is really coming together. Now that Safaree is in line for the male lead she is looking at Bianca for the female lead. After a dance class Juju and Bianca are talking and Bianca reveals that she and Yandy have parted ways management wise. Juju tells her “I want you to play the female role in my play.” Bianca tells her “I want to do it for you.”

Jonathon is ready to lower the boom on Trent. When Trent walks in expecting to meet Raul and sees Jonathon he storms off. Jonathon follows him he tells him “This is what you do. You walk away when you know you’re in the wrong. I’ve been catfishing you for two weeks. I’m Raul.” Trent just keeps walking. He mutters “I’m not going to have this conversation now.” Jonathon asks him “Why not?” Trent keeps walking. Jonathon tells him “I can walk too. I got on time. I can walk all the way to Brooklyn.” Finally, Jonathon gets fed up. He tells Trent “If you cross that street we are over. I swear on everything I love.” Trent crosses the street and Jonathon yells “Bye! Good luck with your nonexistent singing career Tweety Bird!”

The day of Juju’s play auditions finally arrive. Bianca has a great audition. Juju is quite impressed by her. Up next is Safaree auditioning for the role of Kevin. Safaree asks “We can’t do it together? I want to really get into character.” At the end of the day everyone was impressed by Safaree and Bianca. Juju’s sister asks about her plans. Juju tells her she doesn’t know if she’s getting together with Cam. Her sister is shocked. Juju says “We have always talked about things and gotten over it, but this feels different.” Her sister says “Whatever will be will be.”

The night of James’ video release party is a success until Self, Jacquees and Snoop show up. Sofia is a no show. Jacquees asks “Where is your bad girl?” Snoop and the crew are not impressed. Snoop says “This dude is a clown!” James does not take kindly to that comment and tells her to get out. There is a bit of pushing and shoving between Snoop and James. Then Jacquees steps in and the fight becomes physical again!